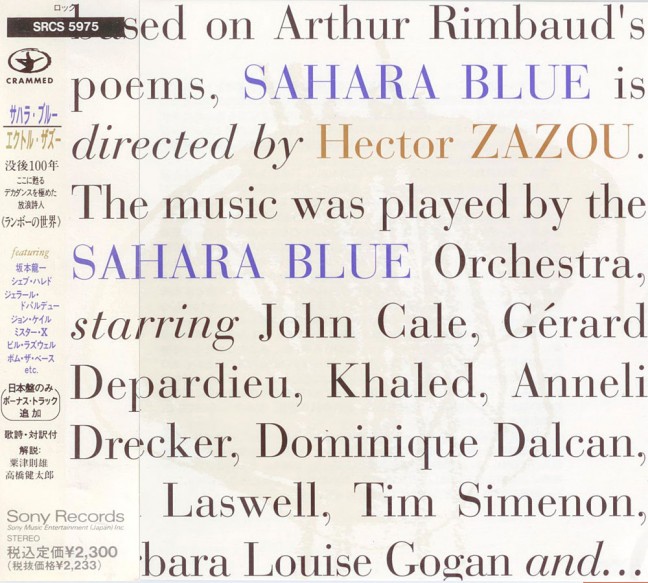 This japanese version comes with a bonus track: I’ll Strangle You, Tim Simenon 12″ Remix version. Displayed is the PROMO version.
The booklet features 8 pages more with liner notes and lyrics.

Though Sylvian is named on this edition (contributing guitar and to the writing), his remaining vocal performances are credited pseudonymously as Mr. X

Right after release, Virgin Records (or David himself as we can read in Hector’s remarks below) objected to two songs on this original pressing: To A Reason, Victim Of Stars. Both tracks feature David Sylvian, who was signed to Virgin at the time, on lead vocals.
This edition was replaced by a more common one on which these two songs were replaced. This makes this first edition very, very rare!

It was once again Jacques Pasquier who had the idea of setting to music Rimbaud’s poems: he had asked me to compose something for the 100th anniversary of Rimbaud’s death, which was being celebrated at the Grande Halle of La Villette. It had to be a kind of ambient music for an event that lasted 24 hours. I suggested a collaborative work between Sakamoto, Sylvian, Laurie Anderson and myself. I can’t remember exactly why Laurie Anderson didn’t take part in the project. We went in the studio and came up with a work in progress, and Jacques wanted to finalize it on record. The other guests came later, gradually, as Jacques was able to find the money to pay them.
There was no serious problem or misunderstanding with any of these people. Even with David Sylvian, who didn’t want the songs he sang to be included in the final version of Sahara Blue (there is another version in which he sings on two tracks). He never explained his reasons for refusing, and this hurt me; but time has passed and we are in touch again now”.