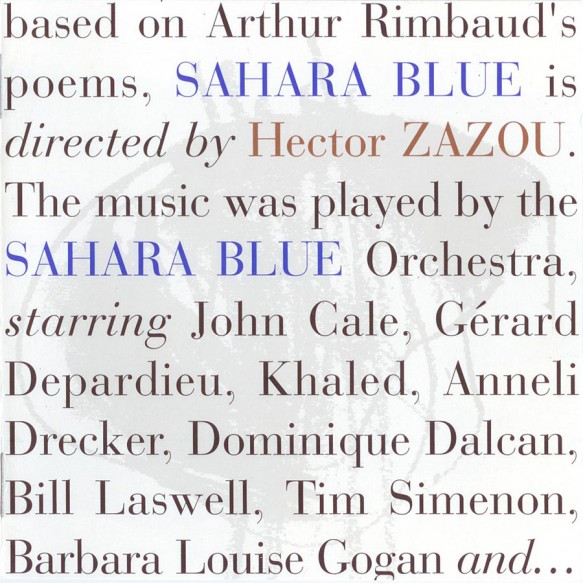 Right after release of the first edition, Virgin Records (or David; see Zazou comments in Strong Currents booklet) objected to two songs on this original pressing: To A Reason, Victim Of Stars. Both tracks feature David Sylvian, who was signed to Virgin at the time, on lead vocals.
This edition was replaced by this version; a more common one on which these two songs were replaced. The two new tracks are Youth (w/ David on guitar) and Black Stream. Both with Brendan Perry and Lisa Gerrard (Dead Can Dance). These tracks replace To A Reason and Victim Of Stars.

Fact: I have Hector Zazou’s Sahara Blue, with catalogue number MTM32, but the tracks Victim Of Stars and To A Reason are not on it. How come?

Both tracks were on the initial release but Virgin requested (cq. demanded) that they be withdrawn from subsequent releases. Besides the fact that David Sylvian wasn’t completely satisfied with the arrangements of his vocal tracks, Virgin refused to give permission to Hector for releasing the vocal tracks. Zazou took a wild chance and released the recordings crediting David’s vocals to Mr. X. It turned worse and Virgin threatened Hector to take him to court unless the vocals were removed. So, there was the second version with David’s tracks replaced by others.
Sylvian once said he didn’t think the album was that good, but respects Zazou’s work and didn’t have any problems with his voice being used.

The other side of the story……

In the project “Strong current” of Hector Zazou (cd+book) he says:
“It was once again Jacques Pasquier who had the idea of setting to music Rimbaud’s poems: he had asked me to compose something for the 100th anniversary of Rimbaud’s death, which was being celebrated at the Grande Halle of La Villette. It had to be a kind of ambient music for an event that lasted 24 hours. I suggested a collaborative work between Sakamoto, Sylvian, Laurie Anderson and myself. I can’t remember exactly why Laurie Anderson didn’t take part in the project. We went in the studio and came up with a work in progress, and Jacques wanted to finalize it on record.
The other guests came later, gradually, as Jacques was able to find the money to pay them. There was no serious problem or misunderstanding with any of these people. Even with David Sylvian, who didn’t want the songs he sang to be included in the final version of Sahara Blue (there is another version in which he sings on two tracks). He never explained his reasons for refusing, and this hurt me; but time has passed and we are in touch again now”.