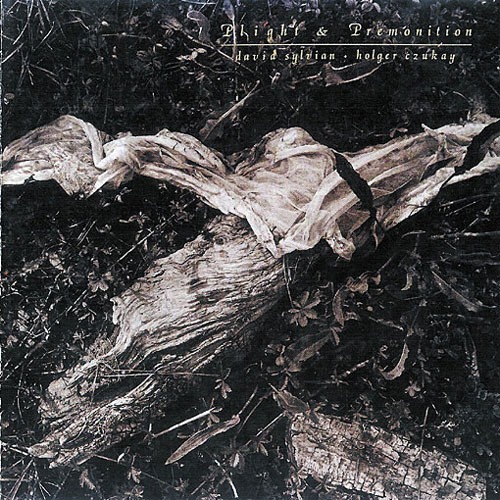 Recorded winter 1986/1987, but not released until March 1988 because of legal copyright problems.
Design and photography: Yuka Fujii assisted by Icon, London.
Artwork: Mekon

Japanese version has no bonus tracks. The only thing worth mentioning is David’s personal note in the Japanese booklet of Plight And Premonition (see image) and the coloured inlay.

The basis for the pieces Plight and Premonition came out of a live recording session which took place in Februari 1986 at Can Studio, Koln, Germany. Both pieces were improvised by Holger, Karl Lippegaus (a D.J. and journalist living in Koln) and myself, over a period of two nights. We created a sound evironment to work to by setting up guitar loops, tape loops, and drones, made up from, among other things, pre-recorded radio signals. We then improvised at random with wathever came to hand.

Some months later, Holger took to dubbing and editing Plight. The end result, because of the radical cuts made, gave the piece an unusual quality. I’ve described it as a filmic quality. As the reediting remains audible, it can have the effect of producing in the visual imagination of the listener, constant shifts in perspective and/or location, wherever they appear. This is, of course, accompanied by shifts in emotional response.
The idea of this approach to editing music in a ‘visual’ sense, as one imagines editing of film, although not far from Holger’s own way of working in the past, offers up interesting possibilities when applied to forms of music which are visual in nature.

The second piece was completed in February 1987 by Holger and myself. This piece proved to be the more difficult of the two to complete as it allows little room for dubbing and editing, having already a well defined rhythmand dynamic of it’s own.
We basically mixed it as it stood, with faults in sound, tuning, etc., remaining.
Every attempt to rectify these things seemed to chip away at the internal chemistry of the piece.