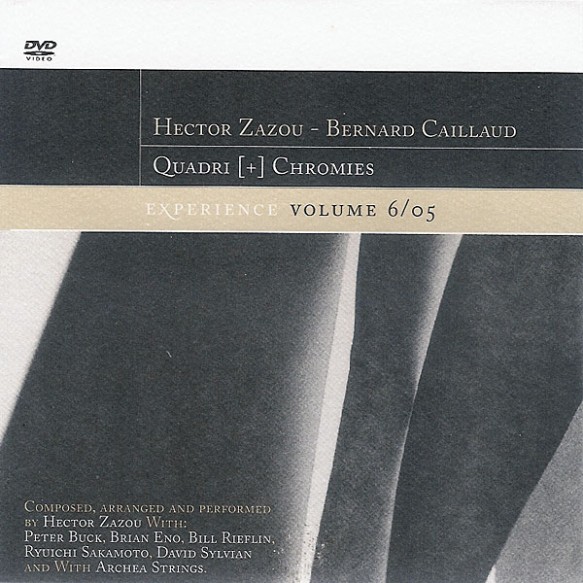 It contains music, essays, novels, photography etc. and there is always an unpublished novel and an unpublished various artists contemporary music CD. (like recently Distant Lights by Roger Eno and Pier Luigi Andreoni).

David contribution: samples on instrumental track 3.
Ryuichi contributes in track 1, 4 and 5 (latter with Brian Eno)
Brian Eno and Ryuichi Sakamoto are together in the track called Ellipses
Peter Buck contribution in Lignes and Rectangles
Bill Rieflin contribution in Carrs du Bleu au Noir
Digital paintings by Bernard Cailloud
Verification with David’s management made clear that a couple of years ago, David supplied Zazou with a selection of sounds which he has now incorporated into the track Matire Pensante of Quadri+Cromie. That was David’s only involvement in the project.

Update: the same magazine has been spotted with a different cover. The magazine is shrink wrapped and on top there is now a sticker featuring the announcement of the artists on the DVD (including David’s name).
Gallery
Tracklist
1 3 Matière Pensante