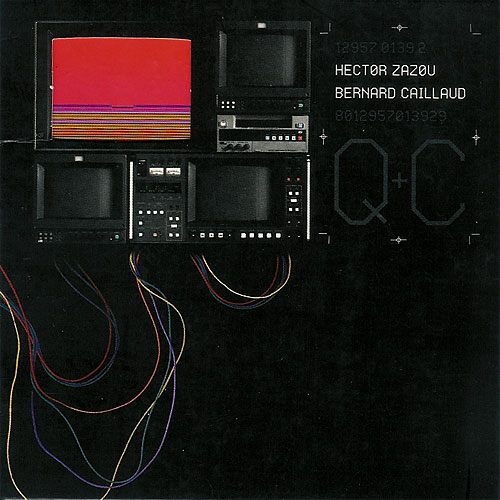 Quadri +Chromies with its almost contemporary tones, is the result of a two-year collaboration with the painter Bernard Caillaud. The musician lets the colours be heard and the painter, the sounds be seen.

The work is contained in a dvd+cd edition in a box which includes ten postcards. Each disc is seperately packed in a card sleeve. Each postcard features a video artwork of Caillaud and represents a track from the album.

Quadri[+]Chromies brings together the video pictures of Bernard Caillaud and the electronic music of Hector Zazou.
Images and music are generated by computer. Colors and sounds seem to dialogue in a strange mechanical music that becomes understood by the spectator.
Hector Zazou has composed a serie of pieces for electronic and strings. Brilliant musicians like David Sylvian, Brian Eno, Ryuichi Sakamato, Peter Buck et Bill Rieflin (from REM) have been involved in the recording sessions. Quadri[+]Chromies is presented two ways (which can be complementary):

Quadri[+]Chromies was created in concert in Florence (Festival Fabbrica Europa) in May 2002, and performed in Moscow in October 2003, Monterrey (Mexico) in October 2004 and Sofia (Bulgaria) in March 2005.

Verification with David’s management made clear that a couple of years ago, David supplied Zazou with a selection of sounds which he has now incorporated into the track Matire pensante of Quadri+Cromie. That was David’s only involvement in the project.

originally published at All About Jazz

Hector Zazou insists on looking forward and never resting on his laurels. Maybe that is because he never bothers to repeat the same formulas that made him successful and earned him recognition in the first place. This French composer, producer and sonic sculptor has been producing works that merge richly textured electronics with non-Western aesthetics, thus undertaking voyages into the eclectic and often the unheard.

Quadri+Chromies is the result of a two-year collaboration with French digital painter Bernard Caillaud. It presents the soundtrack composed for the multimedia performances the two artists did based on digital painting sequences by Caillaud.

The pieces start with a strange cacophony of varied sonic textures and interesting samples. All of them evince a ceaseless motion, which throughout its flow mutates, corrodes and malfunctions. And sonic sculpturing he does. The music is in a state of continuous flux, turning into some sort of eerie bleep-fest with discordant percussion, synth whooshes and synth-like strings. Somehow, as the complexity of these pieces grows, so does their unpredictability.
Contributions feature artists such as David Sylvian, Ryuichi Sakamoto, Peter Buck (REM), Brian Eno and Bill Rieflin. The CD is accompanied by a DVD with computer graphic images accompanying this music, and ten postcards with visuals.

Quadri+Chromies is not easy listeningit’s both demanding and challenging. It may test many listeners, and just like with every previous release by Zazou, the fascination lies in the music’s singularity and continuing challenge. In a way, this is the sound of our technological present in all its complexity.