Home Releases Albums The Good Son vs The Only Daughter

The Good Son vs The Only Daughter 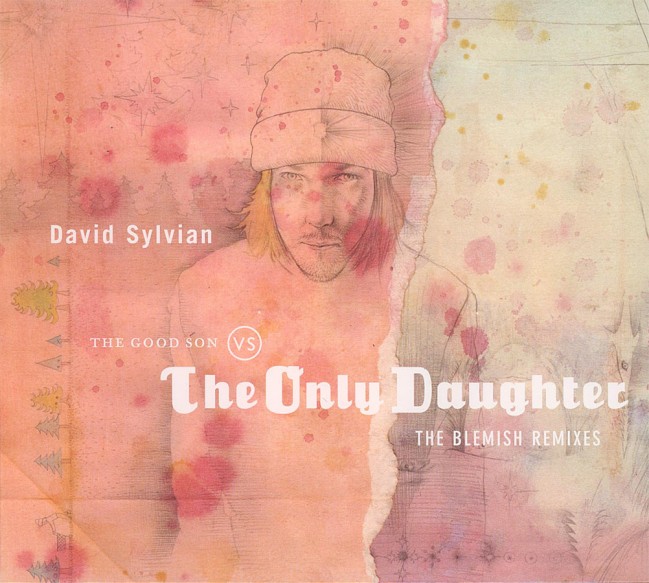 The Blemish album has been remixed by various artists including Ryoji Ikeda, Burnt Friedman, Readymade and other electronic stars.

The Only Daughter outside panel.

The Only Daughter inner panel

An album of remixes, the nine tracks of The Good Son vs. The Only Daughter were made by musicians handpicked by David Sylvian to shake up the subdued sonic architecture of Blemish (2003). Because most of the names of the remixers are not familiar to me, I can only go by what I hear. And what I hear is, by and large, impressive. Most of the new songs make good use of the spareness of the original material, using Sylvian’s lyrical richness and strong delivery as the basis for adventurous reworkings.

When he described Blemish as an “impromptu suite of songs for guitar, electronics and voice”, Sylvian offered his listeners both a caveat and a challenge. Because despite of the appearance of guitarist Derek Bailey on a number of tracks, the overall sound of Blemish is more stripped-down and unpolished than Sylvian’s earlier solo albums such as 1999’s Dead Bees on a Cake. The nearly 14-minute title track opens the album and maps out the emotional territory of the later compositions. Shimmers and quivers of electronic ambience are broken by bursts of anxious words: “And mine is an empty bed / I think she’s forgotten”.

The lyrics tell of betrayals, jealousies and break-ups in the family, but seem to give only bits and pieces of the whole story. On the cusp of transformation, each of the personas is unable to accept the past while at the same time remaining ambivalent about the future, to the point where even favorable change is expressed in wholly negative terms: “There’s a world of disappointment to be lost”. The hesitancy to face up to the reality of the situation (“Place a dummy on the roof / Stitch him a tongue / Give him proof”) ends in failure, as it must: “Like blemishes upon the skin / Truth sets in”.

Even if the remix artists allow Sylvian’s voice to stay prominent and undisrupted, many of them play freely with the lyrical content. When he cuts and reshuffles the words of “Blemish”, Burnt Friedman produces a version that is considerably more affirmative and upbeat
than the original. In contrast, he overdoes “Late Night Shopping”, the source album’s most playful track, with the inclusion of a sickly-sweet chorus.

Sweet Billy Pilgrim’s rearrangement of the vocal parts of “The Heart Knows Better” not only uplifts the mood of the piece, but the new place of emphasis allows for consecutive layers of aural textures to be introduced easily into the mix. “How Little We Need To Be Happy” by Tatsuhiko Asano reveals the pop song well hidden in the caustic original. The remixer hasn’t needed to rethink the lyrics, but instead has built the celebratory orchestration around the voice. The result is a revelation, as if the Blemish version were only a rough draft waiting for Asano’s input.

Yoshihiro Hanno’s “The Good Son” tops the original by placing the rank lyricism within a less tense musical structure, while still leaving much of Bailey’s guitar work intact. In addition to the intro and outro atmospherics, Akira Rabelais applies numerous subtle touches on his rendering of “Blemish”. The two variations of “The Only Daughter”, on the other hand, are solid rather than mesmerizing. In Ryoji Ikeda’s piano-driven piece, the voice and music seem to flutter at a distance from one another, whereas the second variant by Jan Bang and Erik Honor sets them in the same groove.

The remix of “Fire in the Forest” by Readymade FC, like Friedman’s “Blemish” and Asano’s “How Little We Need To Be Happy”, brings the lightness and hopefulness of the song to the foreground. It is not the case that these qualities are something Sylvian attempts to deliberately obscure; rather, he reserves the sudden brightness until the moment its impact can be greatest. In the image of an immense forest which suffers the loss of single trees, Sylvian has hit upon a fittingly spacious metaphor for emotional unrest:

There’s a fire in the forest

It’s taking down some trees

When things are overwhelming

I let them be

A measure of The Only Daughter‘s success is that the album allows the listener to return to the source with fresh ears. The pulsating electronics and erratic guitar plucks of Blemish become the crackle and crumple of burning leaves. In turn, the energetic overabundance of The Only Daughter sounds like new vegetation pushing itself overground from the ashen soil.

Gallery
Tracklist
1 1 The Only Daughter (Remixed by Ryoji Ikeda)

The Only Daughter (Remixed by Ryoji Ikeda)

1 4 A Fire In The Forest (Remix by ReadyMade FC)

A Fire In The Forest (Remix by ReadyMade FC)

How Little We Need To Be Happy (Remix by Tatsuhiko Asano)

1 8 The Only Daughter (Remix by Jan Bang & Erik Honoré)

The Only Daughter (Remix by Jan Bang & Erik Honoré)