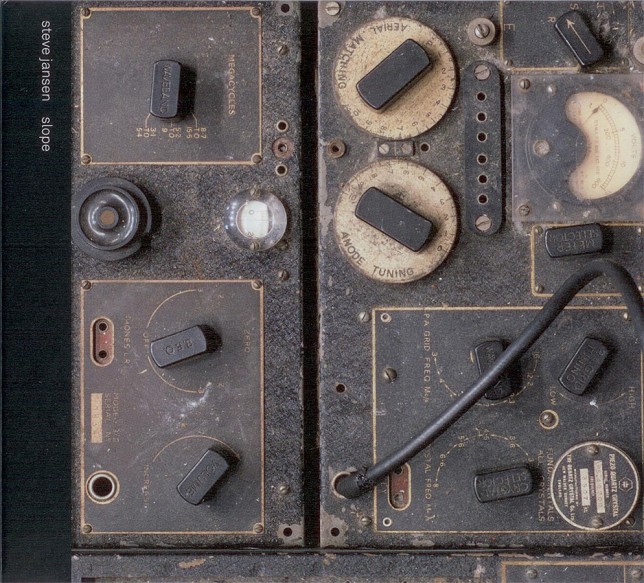 The triple cd set comprises the original album plus remixes, live recordings and instrumental soundtracks, which includes lyrics and all new artwork by Carl Glover.

Released to highly positive reviews in 2007, Slope was the debut album from Steve Jansen.

As Jansen explains, “With Slope, I approached composition attempting to avoid chord and song structures and the usual familiar building blocks. Instead, in an attempt to deviate from my own trappings as a musician, I wanted to piece together unrelated sounds, music samples, rhythms and ‘events’.”

Included are 2 postcards, not signed by Steve.

The album features guest contributions from Tim Elsenburg, Thomas Feiner, Anja Garbarek, Nina Kinert, David Sylvian, Theo Travis and Joan Wasser (Joan As Policewoman).
Furthermore, radical remixes of ‘Ballad Of A Deadman’ and ‘Cancelled Pieces’ by Steve Jansen. A reworking of ‘Conversation Over’ by Tim Elsenburg aka Sweet Billy Pilgrim. The remix Deadman’s Ballad has been dropped on this issue.

swimming in qualia was a commissioned soundtrack for a video installation by shoko ise. created over a period of months during mid to late 2007. this was a work in two parts for two projectors playing consecutively: ascent – the main body of the composition, and glimpse – a shorter, looping sequence. the installation was featured as part of the still / alive exhibit of contemporary art and photography in japan held at the tokyo/metropolitan museum of photography from 22 december 2007 to 20 february 2008. titles 03,04, 05 were created for short films by shoko ise included as extras on the live dvd the occurrence of slope. titles 03 and 05 were later reworked for a live performance by ise and jansen in harajuku, tokyo in december 2010 and were not previously released in this extended form. ‘conscience’ and ‘let go’ are both previously unreleased pieces created for short films. ‘sow the salt alternative version’ is a remix by steve jansen exclusively for this release.

2 7 Ballad Of A Deadman (Live – Occurrence Of Slope)