A Universe Of Disappointment 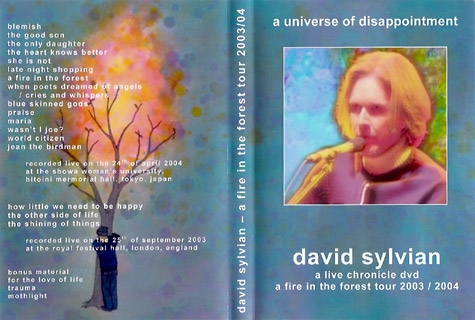 Normally, I don’t list home-made boots but this one seems to be so known amongst fans and also widely spread (mainly because of the lack of an official release).

The quality of the video (the first part) is perfect, as this is the japanese analog TV broadcast (15 August 2004 on NHK BS2) of the concert in Tokyo on April 24th 2004.
The second part of the dvd (missing files from the TV broadcast) have been taken from bootleg footage of the concert in London, September 25th, 2003.

There’s also some ‘bonus’ material (For The Love Of Life, Trauma and Mothlight).

The artwork is done professionally and contains no errors. Extra is the inlay ‘canvas’, which contains some pictures and the full tour date list plus credits.
No credits about the manufacturers of the dvd can be found.