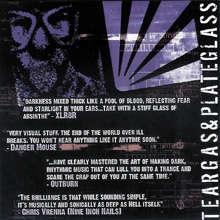 Evasive, reclusive and highly protective of their privacy, the incarnation known as Teargas & Plateglass first surfaced in 2002 collaborating with famed spoken word icon Ursula Rucker for the Being Black album alongside artists including Rob Swift, DJ Revolution, DJ Spooky and Dilated Peoples.

Additionally, they contributed a song to the Genocide in Sudan CD which included songs from System of a Down, Thievery Corporation, Yoko Ono, DJ Spooky and Gorillaz to name a few.

They are currently working on their second full length album entitled Say Nothing; Do these Things; Do Not Describe Them . The album, slated for a 2005 release, includes tracks with Del Tha Funkee Homosapean, Noam Comsky, Murs and David Hykesâ Harmonic Choir.