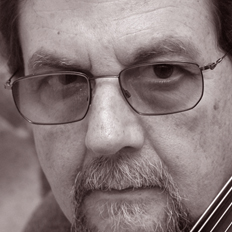 Marcio Mattos has performed as cellist and double bassist in a variety of recordings and concerts of improvised and new music since the 1970s.

Mattos studied acoustic guitar during his early teens, but switched to his current instruments after becoming interested in jazz. He was mainly self-taught until he entered the Villa-Lobos institute, where he first began his involvement with improvised and electronic music. Mattos moved to Europe in 1970, and since has worked with Evan Parker, Derek Bailey‘s Company, Marilyn Crispell, Dewey Redman, Georg Graewe, Chris Burn, John Butcher and many more. He has worked with dance companies, such as The Extemporary Dance Theatre Company, and Ballet Rambert, and works and exhibits as a ceramic artist (he was trained at Goldsmiths College). Ongoing projects Mattos has been involved in include: Tony Oxley‘s Celebration Orchestra, Eddie Provost Quartet, AXON with Phil Minton and Martin Blume, electro-acoustic music groups such as the West Square Electronic Music Ensemble, and as a duo with shakuhachi player Shiku Yano. ~ Joslyn Layne, All Music Guide