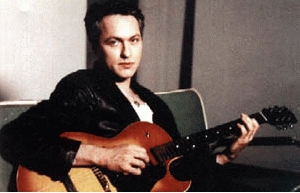 Marc Ribot was born in Newark, New Jersey in 1954.

As a teenager he studied with classical guitarist/composer Frantz Casseus, and immediately applied his studies by playing in various New Jersey garage bands. Moving to New York City in 1978, Mr. Ribot worked as a side man with musicians such as jazz organist Jack McDuff and soul singer Wilson Pickett. He also joined the Stax/Volt oriented Realtones/Uptown Horns Band, who from 1979 through 1983 served as a NY pick-up band for performers Chuck Berry, Carla Thomas, Rufus Thomas, Solomon Burke, and others.
From 1984 through 1989, Ribot toured and recorded with John Lurie’s Lounge Lizards. Dialectically engaging elements of blues tradition with the no-wave aesthetic attention of Tom Waits, Elvis Costello, and other “partecipants in/escapees from” the rock scene with whom he worked on various projects. Concurrent with these events, Ribot maintained an interest in NYC new music, and has performed and/or recorded with Peter Zummo, Peter Kotik, Elliot Sharp, Anthony Coleman, John Zorn, The Jazz Passengers and Evan Lurie. As a composer of music for his own recordings, it is these “downtown” influences that are perhaps the most pronounced, yet Mr. Ribot still prefers to think of himself as a soulmusician.
(Biography courtesy of Saudades Tourneen)