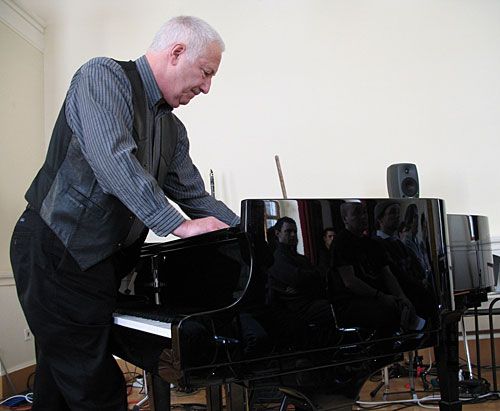 John Tilbury (born 1936) is a British pianist. He is considered one of the foremost interpreters of Morton Feldman’s music, and since 1980 has been a member of the free improvisation group AMM.

Tilbury studied piano at the Royal College of Music with Arthur Alexander and James Gibb and also with Zbigniew Drzewiecki in Warsaw. 1968 he was the winner of the Gaudeamus competition in the Netherlands.

During the 1960s, Tibury was closely associated with the composer Cornelius Cardew, whose music he has interpreted and recorded and a member of the Scratch Orchestra. His biography of Cardew, “Cornelius Cardew – A life unfinished” was published in 2008.

Tilbury has also recorded the works of Howard Skempton and John White, among many others, and has also performed adaptations of the radio plays of Samuel Beckett.

With guitarist AMM bandmate Keith Rowe’s electroacoustic ensemble M.I.M.E.O., Tilbury recorded The Hands of Caravaggio, inspired by the painter’s The Taking of Christ {1602). In this live performance, twelve of the members of M.I.M.E.O. were positioned around the piano in a deliberate echo of Christ’s Last Supper. The thirteenth M.I.M.E.O. member (Cor Fuhler) is credited with “inside piano” as he interacted and interfered with Tilbury’s playing by manipulating and damping the instrument’s strings, essentially doing piano preparation in real time. Critic Brian Olewnick describes the album as “A staggering achievement, one is tempted to call The Hands of Caravaggio the first great piano concerto of the 21st century.”.

Another notable recent recording of Tilbury’s was Duos for Doris (like The Hands of Caravaggio also on Erstwhile Records), a collaboration with Keith Rowe. It is widely considered a landmark recording in the genre of electroacoustic improvisation (or “EAI”).