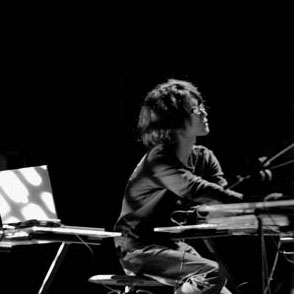 When Takagi started wiorking solo, he was attracting a large following with his high level fusion of sound and visuals.
His activities transcend over various fields such as music, club culture, fashion and art scene – he’s done several video installations at art spaces and had live performances.
Takagi has also released CDs and DVDs both in Japan and overseas.
He has been involved in several projects in Europe, the Far East and the United States,
the most recent of which was a musician David Sylvian’s 18 city tour of Europe which Takagi was in charge of visual for the stage (2003-2004).
(taken from Takagi Masakatsu’s official site)

Though sounding dissimilar, Masakatsu’s work echoes that of Brian Eno’s semi-ambient works in that both harbour a slight, intangible sense of threat beneath their still, unbroken surfaces. Worth a listen.
Peter Marsh

from forcedexposure:
Takagi Masakatsu is a video maker who creates music. Takagi Masakatsu is a musician who creates video, or maybe Takagi Masakatsu is a documentary filmmaker, which ever one you prefer, Takagi is an artist who is wholly dedicated to exposing and preserving the human experience at the start of our burgeoning new century. Bringing new meaning to the phrase ‘think globally, act locally,’ Takagi has travelled the world collecting pieces of sound and video in which he constructs a fluid and timeless snapshot of our current human condition. Takagi employs samples of speaking children with other ‘real’ sounds such as the weather, his own piano playing, and various recorded sounds throughout his and other people’s homes, after collecting this raw material, Takagi blends it into his laptop arrangements and manipulations to create a very new type of ambient music.”