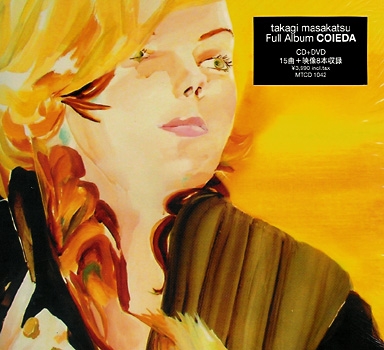 Very beautiful CD+DVD set by Takagi Masakatsu.
Takagi, very well known for his visual work during the Fire In The Forest tour 2003 and 2004, made an astonishing package, featuring a slipcase holding an audio CD and a DVD both in digipack.
All artwork is done by Saeko Takagi (BUILDING).

Additional information of the DVD:
Track 1 birdland#3 and track 2 girls are made at David Sylvian’s studio and partly used during the Fire In The Forest tour 2003-2004. The piano is recorded during the live performance at SPIRAL Hall, Tokyo (2003.10.26).

In the ‘thank you’ liner notes, Takagi thanks many people including: Steve Jansen, Jude, Gobi, David Sylvian’s family, Yuka Fujii and the crew of the David Sylvian tour.

In the liner notes of the DVD you can find the following:
“Deepest thanks to David Sylvian for freeing me into another world.”