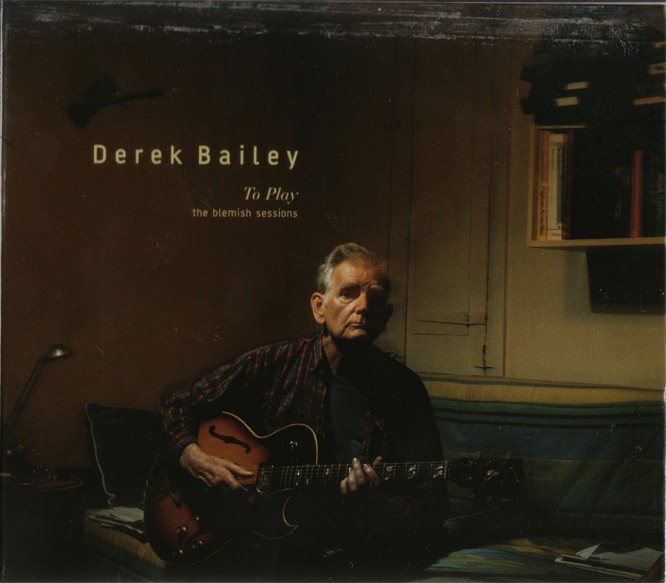 David completed mixing and mastering the session that Derek Bailey recorded for the album ‘Blemish’. It was to be the last solo studio session Derek recorded before the onset of illness. It’s a remarkably intimate series of recordings with Derek performing at the peak of his powers.

Thanks to Simon for the info.

Marcus Boon on “To Play: The Blemish Sessions”

Playing is really subversive of virtually everything … And thats  where the life is in music. It always seems like its the vein, the  conduit for life in the music. That appetite seems to me to be always to do with changing things, which is often to do with fucking things up. –

Derek Bailey died on Christmas Day, 2005, aged 75, leaving behind a  lifetime of collaborations, friendships, and a vast treasure hoard of  recordings accumulated in fifty years during which he was one of the principle figures responsible for the rise of improvisation in music in the West. One of his final collaborations was an unusual one with Samadhi Sounds David Sylvian, who invited him to provide me with a challenge as a vocalist. Thus, on February 18, 2003, Bailey went into Moat recording studio in London and recorded a solo acoustic and electric guitar session (Sylvian was absent) a significant portion of which is to be found on this disk. Three tracks from the session were used, more or less unedited, by Sylvian on his celebrated disk Blemish (Samadhi Sound, 2004) one of them is included here.

I’d always felt the performances were very strong on that session,  comments Sylvian, and it’d been my intention to return to the material  when time allowed to review it and send the results to Derek for his opinion with a view to releasing it. I’d starting listening to the material towards the end of last year unaware of the seriousness of Derek’s illness. Consequently he passed away without ever hearing the  result of his work.

Those familiar with Baileys angular, spiky, minimal lines on Blemish will be surprised by the lush, melodic richness and density of Baileys performance here, which has the same beauty and playfulness found on Baileys most popular and accessible recent disk, Ballads, Spidery flamenco-like runs resolve into minor jazz chords, percussive trebly harmonic sprays of sound, but with a lovely vitality, a delight in discovering new rhythmic and melodic pathways, a generosity and spaciousness that refuses any pre-set limits on how To Play. And Blemishof course hovers like a strange ghost around the music our own memories of hearing Sylvians vocal responses to Baileys work in the Blemish songs, but also the imaginary dialog going on in Baileys mind with an absent vocalist, the spaces for response which he allows for.
The session must have been a challenge for a man so suspicious of recording, and committed to improvisation as a collaboration happening in the moment of Play. If so, he rose to the challenge admirably the recordings have an exposed, intimate feel to them that is remarkable.

As fate would have it this was to be the last solo studio session Derek was to record before the onset of illness, recalls Sylvian. That might make the session valuable in itself but it’s the quality of the work thats outstanding.  The conversational quality, the apparent ease of facility in that ongoing search for what remains elusive. You witness up close the struggle and fluency, frustration and facility. It’s an intriguing dichotomy illustrated so beautifully on this recording. I’m reminded of the title of that Bill Evans recording Conversations with Myself. This is an external manifestation of one man’s internal dialogue. A struggle for eloquence using all the considerable skills at his disposal. Always attempting to push beyond the confines of the vocabulary, even one self-invented for this very purpose. That quixotic mission necessarily accompanied by plenty of humor and self-deprecation.
A means of getting oneself out of the way, of not taking oneself too seriously but dedication to the process for it’s own sake perhaps?

To Plays title was suggested by writer/musician and longtime friend of Baileys, David Toop, after hearing the recordings, which he says are among his favourite solo recordings of the artist. Toop explains: after my last face to face conversation with Derek, I was so struck by his emphasis on ‘just playing’ as a deep philosophy at the core of his work, and some of the anecdotes of his early life, that I thought of writing a stage play. My idea was that Derek would play within the play.I suggested this to him and he seemed agreeable, at least. The idea came to nothing, partly because of other commitments and partly because I don’t have a great love for most theatre and so couldn’t seem to get started on it, but I still like this word Play (much Beckett in there) in relation to Derek’s activity.”

To play might mean: to do it now, as you are; to improvise, to use what is at hand; to enter into a game, not just to act according to someone  elses set of rules, but to invent processes, ways of doing things, protocols; to imagine new ways of being together, of proceeding. Derek Bailey did not fuck this up.