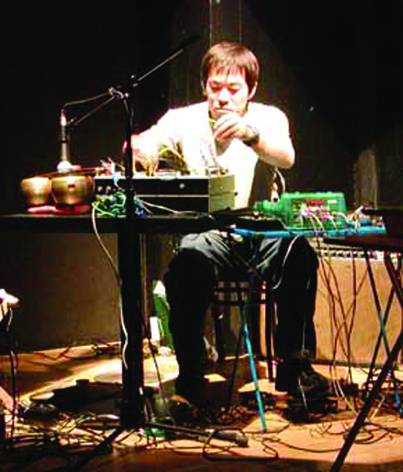 He played in rock bands while at college, but turned to improvisation after discovering free jazz and free improvisation musicians like the guitarist Derek Bailey, the saxophonist Kaoru Abe and guitarist Masayuki Takayanagi (from whom he had lessons). Otomo studied at Tokyo University from 1979 where he took a course on ethnomusicology in which he concentrated on Japanese pop music during World War II and the development of musical instruments during the Chinese Cultural Revolution (samples of instruments and music from this period are found in several of his records).

From 1981 Otomo played free improvisation in clubs, performing on guitar and also using tapes and electronics. Otomo began to release records from the end of the 1980s. He has been very prolific, working in a variety of styles and collaborating with a wide range of musicians. For much of the 1990s his main project was Ground Zero, a large group founded in 1990 with an ever-changing lineup. They played music in a variety of styles, perhaps best summed up as noise rock with an experimental edge. Ground Zero was disbanded in 1998. Towards the end of that group’s life, Otomo formed Filament with Sachiko M, an outfit which concentrated on music made from sine waves, clicks and hums, and ISO (Otomo Yoshihide, Sachiko M and Yoshimitsu Ichiraku), which played purely electronic improvisations. He also continued to play with other musicians on a variety of projects. At the end of the 1990s he founded Otomo Yoshihide’s New Jazz Ensemble, a group that played more traditional jazz (albeit with added sine waves from Sachiko M and noisy passages). In Japan, a more consistent lineup of the group, used the name Otomo Yoshihide’s New Jazz Quintet, for several releases. Records released under his own name include Cathode (1999), Anode (2001). Otomo has also released duo albums with early experimental turntablist Christian Marclay (“Moving Parts”, 2000) or Nobukazu Takemura (“Turntables + Computers”, 2003). Among the other musicians Otomo has worked with are Jon Rose, Yamatsuka Eye of The Boredoms (with Eye as MC Hellshit and Otomo Yoshihide as DJ Carhouse), Butch Morris, Voice Crack and poire_z.