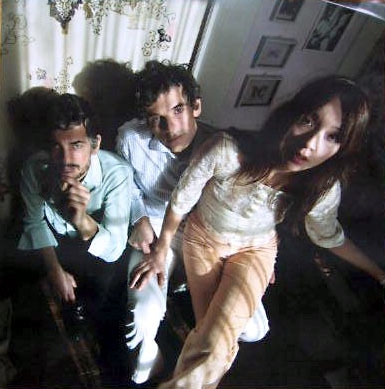 Blonde Redhead are that rarest of things’ a band whose voice has grown stronger, clearer and more distinctive with every record that they have made. Their reward for this has been an audience whose numbers have quietly grown over the course of their career, almost entirely by word of mouth.

Trace elements of the spare otherworldliness and bittersweet tension that contribute to the band’s unique sound can be discerned even in the early (mid-90s) records that they made for Smells Like Records. But what’s more striking about those releases is a stridency and an impulsive abrasiveness inspired by the no-wave explorations of Downtown NYC and the refusenik spirit of DC’s Dischord roster. Blonde Redhead’s command of oblique melody and urge towards textural experimentation started to flower more confidently when the band moved on to work with Touch And Go. A broader range of influences started to have their effect on the music, and the band’s artistic progress was triumphantly confirmed by the appearance in 2000 of “Melody Of Certain Damaged Lemons”.

Although this record slipped almost invisibly past the music press, it did inspire devotion bordering on zealotry amongst its listeners. In fact, Blonde Redhead’s reputation has never really been built on media acclaim, which goes some way towards explaining the band’s vague mystique. “Melodyâ¦” has gone on to sell more than 50,000 copies in the States alone, and like a handful of other records that managed to redefine what a post-punk band was capable of expressing (Slint’s “Spiderland” springs to mind), it now enjoys a confirmed place in the pantheon of American underground rock music.

This is all the more surprising, given that none of the band are American. Amadeo and Simone came from Milan as teenagers to live in Montreal, while Kazu relocated from her home town of Kyoto in the early 90s to study in New York, where the band initially formed and where all three still live. These tangled paths are reflected in the intuitive twists and turns of Blonde Redhead’s music, which has increasingly shed its influences to follow a strange, bewitching and cosmopolitan logic of its own.

As soon as a staccato clavinet and shivering strings sweep the opening track “Elephant Woman” up into the stratosphere, it’s crystal clear that “Misery Is A Butterfly” is as much of a creative leap forward from “Melody…” as that record was from its predecessors. Throughout, the band’s gently mournful economy of style is adorned by a cinematic breadth of instrumentation, and although the lyric writing is split as usual between Kazu and Amedeo, the rich depth of the arrangements creates a striking and convincing unity of purpose.

Nothing on the new album is straightforward or unfiltered by imagination – Kazu and Amedeo’s wonderfully nuanced singing allows the emotion in the songs to slip out surreptitiously, almost secretly, while Simone’s drumming is a parade of deft inflections throughout. It’s almost as if the increased scope of the record is a reward for the lengthy (almost four year) gestation period since the release of “Melodyâ¦”, although reality isn’t quite as simple as that (that hiatus is largely explained by the fact that Kazu was seriously injured after being thrown from a horse in 2002).

Whatever the reason, “Misery Is A Butterfly” features some of the most tender music in the Blonde Redhead catalogue â tracks like “Anticipation” and “Magic Mountain” swell and shimmer with wistful melodies and delicately-placed skeins of sound. Other tracks are more full-blooded, notably Amedeo-written offerings like “Falling Man” and “Maddening Cloud”, and the hypnotic, almost tantric “Pink Love” – all three underpinned by Simone’s potent, multidimensional rhythms. The closer “Equus” unites the two worlds, its spare, lithe introduction mutating into a chanted chorus of real intensity. Throughout, keyboards, violins and cellos swirl through the mix, conjuring plangent atmospheres and making “Misery Is A Butterfly” an overwhelmingly fluid and rich counterpoint to the angluar starkness of Blonde Redhead’s early releases.

So far, the new decade has been a time of trauma and exploration for Blonde Redhead, but also a time of possibilities being realised and opportunities grasped. “Misery Is A Butterfly” is the sound of a unique band, gazing towards a unique future.