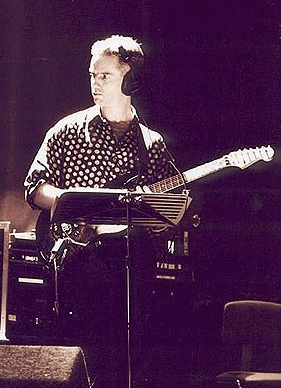 The innovative guitarist and producer Michael Brook was born and raised in Toronto. Plays: Guitar, Bass

While studying electronic music and the arts at the University of Toronto, he met trumpter Jon Hassell, with whom he later toured; through Hassell, Brook also was introduced to minimalist composer LaMonte Young, under whom he studied Indian music. A period working as the house engineer at producer Daniel Lanois’ famed Grant Avenue recording studio led to a tenure playing guitar with the Canadian pop band Martha and the Muffins during the late ’70s; at the same time, Brook also met Brian Eno, guesting on the 1980 Eno/Hassell collaboration Possible Musics. In 1983, he also played on Harold Budd’s Magic Realism.
In 1985 Brook made his solo debut with Hybrid, an influential ethno-ambient work recorded with Eno that discovered the middle ground between Western and Indian musical aesthetics and established his unique, heavily-processed “infinite guitar” sound. He spent much of the remaining decade working with Eno, helping create video sculptures and sound installations across the globe; he also became a sought-after producer, helming records for such diverse talents as Roger Eno, Pieter Nooten, Mary Margaret O’Hara, Balloon, and the Pogues. In 1990, Brook returned to world music, producing Youssou N’Dour’s acclaimed Set; more importantly, he began a continuing collaboration with Pakistani qawaali singer Nusrat Fateh Ali Khan with the seminal Mustt Mustt, a fusion of Western ambient and pop sounds with the sacred spiritual music of the East.

After producing Khaled, a 1991 project for the Algerian rai vocalist Cheb Khaled, Brook returned to the studio to record his first solo effort in seven years, 1992’s stellar Cobalt Blue; a rare concert performance given at a party celebrating the album’s release was subsequently issued as the limited-edition Live at the Aquarium. A pair of projects with the Indian mandolin wizard U. Srinvas, 1994’s Rama Sreemrama and the next year’s Dream, followed; in 1996, Brook reunited with Ali Khan for Night Song, trailed by work on the score for the Kevin Spacey-directed crime noir Albino Alligator.