Alchemy – An Index Of Possibilities 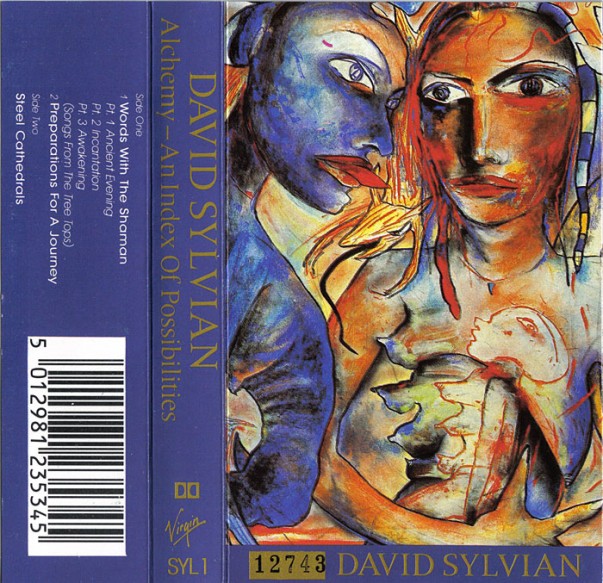 Most cassettes came in an additional cardboard box, which looked a bit weird as the size of the box doesn’t seemed to be designed for holding only a cassette.
The serial number was printed on the front sleeve.

The Japanese un-numbered release of this cassette has the same style of insert as the Canadian one; it extends out to one printed sheet – there is nothing on the other side.&nbsp; Unlike the Japanese Brilliant Trees Cassette, this does not have an outer slip case, it is the same method as used on the UK/ EU & Canadian releases.&nbsp; Inside is a double-sheet which provideds details of the release including ‘The Chronology of David Sylvian’ which commences in 1958.&nbsp; Unfortunately as all the detail is in Japan I am unable to dechiper the content, however looking at the dates listed it seems to correspond with releases of Japan & David’s solo work.

Although the packaging is similar to the UK release, with catalogue number SYL1 on the cover, the cassette is completely different. The weirdest thing is that the catalogue number is TCV 2353. This number is totally untraceble and never specified by Virgin as valid. The most sppoky thing about this cassette is the fact that it was for sale, weeks before the official UK release was released.

The Canadian release of this cassette did not come in Limited Numbers, subsequently there is no number listed on the front of the cassette sleeve.&nbsp; The cover design is very similar to the UK/ EU releases except it is not double-sided, therefore opens out in one complete sleeve.&nbsp; There is no barcode printed on the sleeve, instead, copyright/ manufactured details for Virgin Records Canada.&nbsp; The Cassette Tape is nice too as it has tracks printed on the tape.

The Greece release cover is printed on both sides.&nbsp; The quality of the paper is very thin & ‘shiny’ subsequently much of the ‘gold’ print used is very hard to read, especially the text written in greek.&nbsp; Anyway, this makes a nice collector’s piece

Many thanks to Stefan C. Attrill for providing text and images.

Gallery
Tracklist
1 1 Words With The Shaman

Words With The Shaman

1 2 Preparations for a Journey

Preparations for a Journey