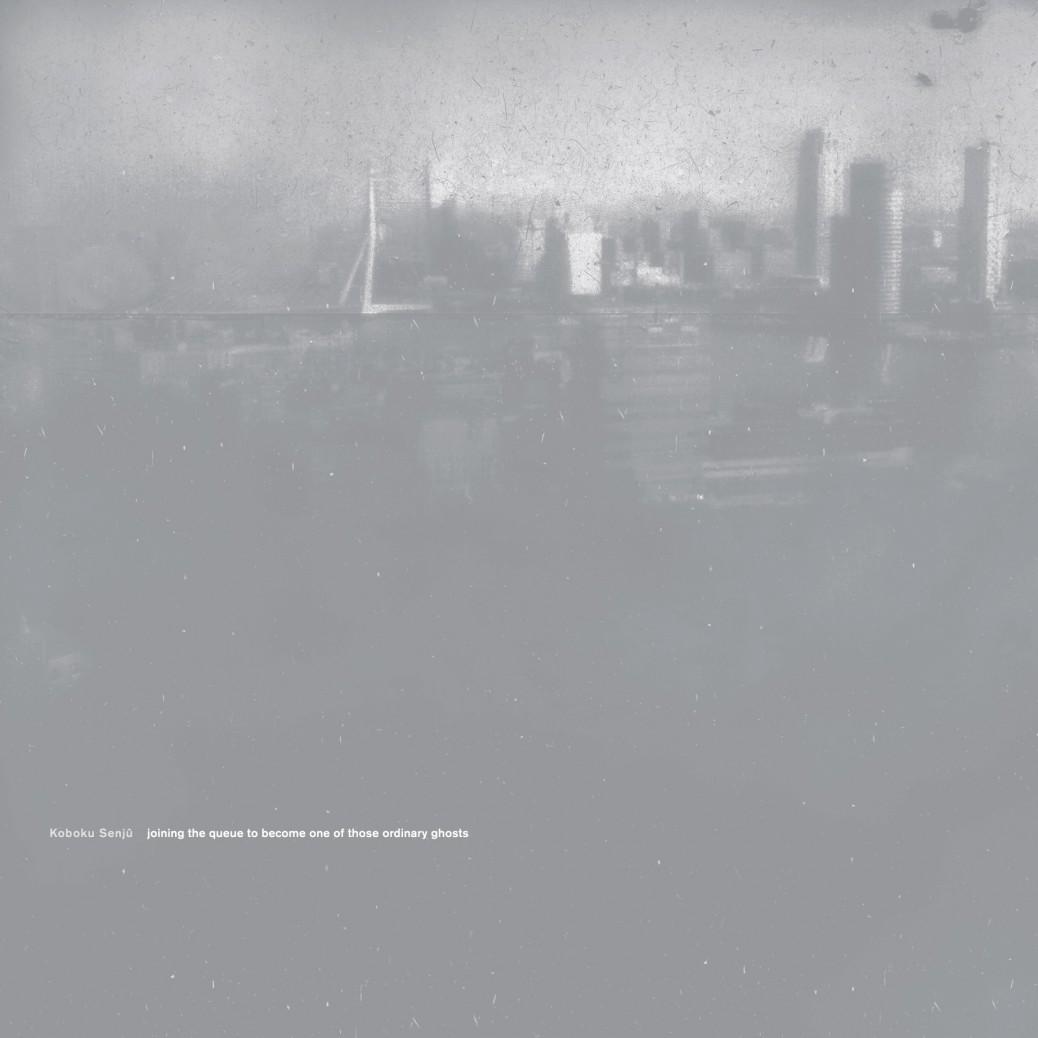 Koboku Senjû’s new album “Joining the queue to become one of those ordinary ghosts” on vinyl and digital format, to be released on 1st February 2013, comes with liner notes by David Sylvian!
Artwork by Rutger Zuydervelt

We all know Koboku Senjû for their excellant performance at Punkt 2011, Kristiansand Norway.

On the 1st Februari, a vinyl (and digital) release of their new album will be for sale at bootcamp. Brilliant artwork by Rutger Zuydervelt.

Koboku Senju, meaning something like «Selection of Dead Trees», is a continuation of the music developed on the album with the same name, Varianter av døde trær, released on SOFA in 2008. Since then, the ensemble has performed numerous concerts in Japan and Europe, finding a particular way of making music together. Their new release «Selektiv hogst» sees the former quartet of Tetuzi Akiyama, Martin Taxt, Eivind Lønning and Espen Reinertsen joined by the no-input mixing board of Toshimaru Nakamura, who is adding yet another level of timbral ambiguity to the group, creating a rich ensemble sound. Akiyama and Nakamura have both long been two of the leading improvisers from the Tokyo scene, and Lønning, Reinertsen and Taxt, are three young and active improvisers from Norway with an increasing reputation for their adventurous yet mature musicality. The ensemble now performs as a quintet.

Includes immediate download of 2-track album in your choice of MP3 320, FLAC, or just about any other format you could possibly desire.

If we’re susceptible to the power of suggestion then, taking the title of this album as our lead, we’re moving amongst a ‘selection of dead trees’ towards our own demise. We wake in the wee small hours of the morning, not in the comforting melancholy of a mournful Sinatra but amidst the anxiety and madness as exhibited by Max Von Sydow’s Johan Borg in Bergman’s ‘The Hour of the Wolf’. The forest is dark and the shadows voluminous and empty. Our own shadows startle us with an unfamiliar hostility. Wild life, as we call it, the dark majesty, the imposing immateriality of the feathered and furred, speak in one common tongue. We’ve traveled a long way from the harmonious comforts of home to the fringes, the outer reaches, the discordant ramblings of our own minds where reason gives way to intuition. We’re a dichotomy fluctuating between the feral and pure spirit. Freud’s ‘every phobia a fear of our own thoughts’. We leave our pasts behind that we might merge with the darkness. Devolution reveals itself as possible evolution. We reject the language known in favour of the primal, the savage tone. Until now, unsounded, snared. Senses heightened, straddling the breach between life and death, are we ready now? “I thank you that the limit has finally been transgressed. The mirror has been shattered. But what do the splinters reflect? Can you tell me that?” The words drift in the half-light, indifferent to our predicament, we are but ordinary ghosts, life and death, two sides of the same coin. Our unknowing greater than the sum of our knowledge. Listen and respond in your true voice, acutely aware that all responses are inclined to failure. From whisper to primal scream, there are degrees of fear, of recognition and awareness, of desperation and surrender. Listening, a participatory, creative act. Listen, there’s no such thing as silence. We are haunted, internally possessed. We’re the void waiting to be filled. We are the haunted and the haunting. “You do not see us, but we see you”. “Listen”, she said, “l’ll only repeat myself once, there’s no such thing as silence”.

Thanks to Clive Maidment for the prompt info (as always).