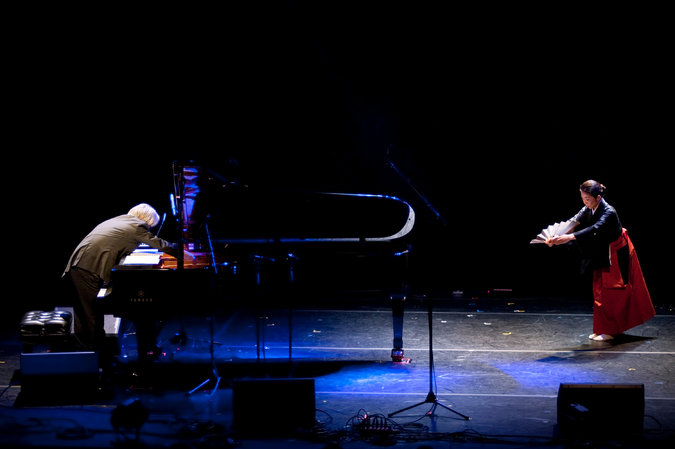 Lyrics
I don't believe in omens or fear
Forebodings. I flee from neither slander
Nor from poison. Death does not exist.
Everyone's immortal. Everything is too.
No point in fearing death at seventeen,
Or seventy. There's only here and now, and light;
Neither death, nor darkness, exists.
We're all already on the seashore;
I'm one of those who'll be hauling in the nets
When a shoal of immortality swims by.

If you live in a house - the house will not fall.
I'll summon any of the centuries,
Then enter one and build a house in it.
That's why your children and your wives
Sit with me at one table, -
The same for ancestor and grandson:
The future is being accomplished now,
If I raise my hand a little,
All five beams of light will stay with you.
Each day I used my collar bones
For shoring up the past, as though with timber,
I measured time with geodetic chains
And marched across it, as though it were the Urals.

I tailored the age to fit me.
We walked to the south, raising dust above the steppe;
The tall weeds fumed; the grasshopper danced,
Touching its antenna to the horse-shoes - and it prophesied,
Threatening me with destruction, like a monk.
I strapped my fate to the saddle;
And even now, in these coming times,
I stand up in the stirrups like a child.

I'm satisfied with deathlessness,
For my blood to flow from age to age.
Yet for a corner whose warmth I could rely on
I'd willingly have given all my life,
Whenever her flying needle
Tugged me, like a thread, around the globe.
Video

Ryuichi Sakamoto appeared as a guest at the Concert for Japan concert on Saturday, April 9, 11 AM Â 11 PM
Ryuichi was be joined by:

The performance was live on Ustream.com.

100% of proceeds from this event will go to the Japan Earthquake Relief Fund.