The Work Of Director Anton Corbijn 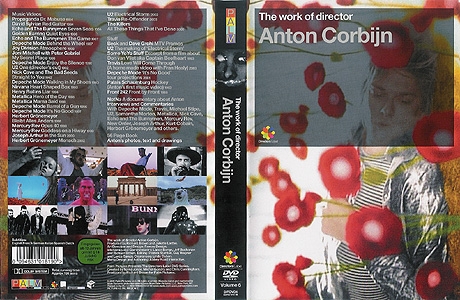 Finally an official DVD with the video clip of Red Guitar, directed by Anton Corbijn.

The Work Of Director Anton Corbijn is an anthology of Anton’s work as a video director.

On the dvd you can find the following:

In the book, Anton gives comments on every clip. About his work on Red Guitar:

David saw the Propaganda video on TV & subsequently approached me for this song, his first solo single since leaving the group Japan. I had photographed him a few times in that setting, he was often seen as a teenage-pinup, poster boy, very striking and introvert appearance. For him to ask me to direct this video was making a statement I  think. Anyway, it is again a challenge for me to come up with ideas and I spent a couple of days in Bruxelles in a hotel room to concentrate on that. I found it so difficult to come up with anything worthwhile – I am glad that that part of the process is less of a chore these days. What I came up with was basically
lots of images that have no connection to each other and the main image is based on a photo by Angus McBean. Angus was retired by this time but was a great surrealist and I called him up to get his permission to use the photo and we ended up with him in the video. He loved it, he was a great man to spend time with but I recall he couldn’t believe he was on Top Of The Pops at age 80 and David’s voice came out of his open mouth. I did one more video with David the same year and only photographs after that. The little boy in the video I found at the Lycie Frangais in London. Can’t remember the name.