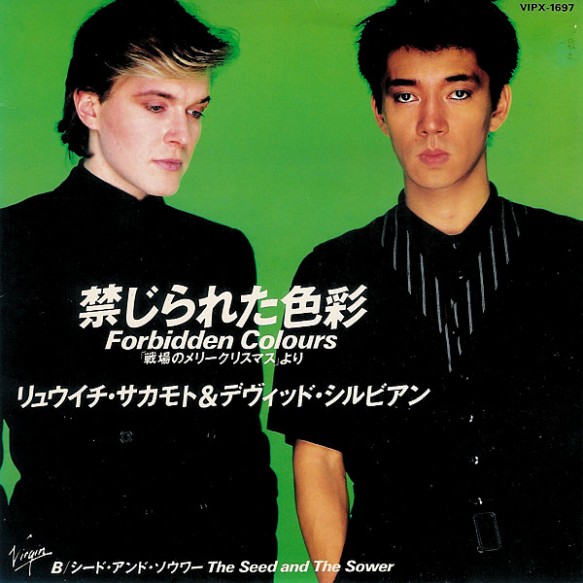 Note: On the thick cardboard sleeve of the Japanese single, the lyrics are written on the back and contains a printed inlay.

12″: Virgin|Ariola Germany 600.965
side A: Forbidden Colours, Merry Christmas Mr. Lawrence
side B: Nightporter (Japan 1982)
Note: There seems to be a release with the same cover but rotated 90 degrees and the text:
Japan
Sylvian
Sakamoto on the right in black text.

The German release attempted to cash in on both the successes of Japan’s Nightporter and the movie Merry Christmas Mr. Lawrence, featuring the vocal- and instrumental versions.

On the left there’s another vesion with Instrumental Forbidden Colours on the b-side. The shown back cover sports the movie promo picture with it’s the title “FURYO”

Above is printed the magnificent Japanese version of Forbidden Colours on 5″ CD (VJCP14025) from 1991. This is a real collector item and quite often it is listed for sale (not cheap though). If you are really a Sylvian collector, get this one!