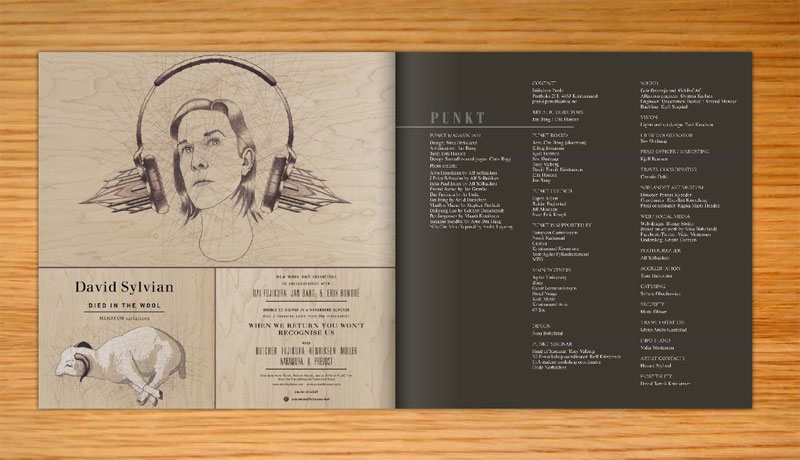 Also, David’s concert is sold out so they willl expand the hall (by removing orchestra pit) to be able to put out 30-40 single tickets for Plight & Premonition!

The origins of this composition/installation lie in my experience and research into the current life and the history of the Canary Islands where the work was first commissioned and installed. It was a work conceptually based on the original inhabitants of the islands, about whom little is known ( the Guanches, a white race, vigorous, of high stature, fair-haired, blue-eyed, and leading mostly a pastoral life ). My interest lay in the connection between the physical or scientific reality of our biological make up, the links to lineage (genetic geneology), location and, to move beyond the realm of science into intuitive logic, the interior life of a community or people; an implied cultural heritage.

The piece was entitled ‘when we return you won’t recognise us’ which alluded to the Guanches physical presence in the bodies of those living (despite the continuous changes suffered by the population aboriginal mtDNA [direct maternal] lineages constitute a considerable proportion of the Canarian gene pool) but also to their spiritual presence in the islands themselves.

Since then I’ve had occasion to expand upon my original intentions for the work and in the process it became less a site specific piece and evolved into something that can potentially be re-staged in a variety of locations. It can be listened to in isolation or viewed as part of a larger work concerning the universality of human experience, the undying spirit, as represented in Fukui’s archetypal work ‘The Botanist’ in which we see the fusion of the male and the female in one body.

Self-contained, self-sustaining, a buddhist non-duality. This represents the coming together of the male and female energies as referenced in much of the world’s ancient literature.

The current manifestation of the work stands alone but it’s also designed to embrace interactive elements on the part of live performers. It’s possible therefore to stage a variety of interactive events throughout the duration of the exhibit.

THE CONCEPT OF THE INSTALLATION WORK

David Sylvian is a recording artist, producer, composer/lyricist, musician/vocalist, photographer, and record label director. He has released numerous albums both solo and in collaboration with many musicians of world renown. He has also worked on a number of art related projects. In the 1990’s he worked on two major audio/visual installations staged in Tokyo, Japan; ‘Ember Glance’ and ‘Redemption’.

In 2006 Sylvian was commissioned to create an audio artwork by the Naoshima Fukutake Art Museum Foundation on the island of Naoshima, Japan as part of the NAOSHIMA STANDARD 2 exhibition which ran from Oct 06 2006 to April 15 2007. The resulting work, entitled ‘When loud weather buffeted Naoshima’, was created for mobility so that individuals could move freely around the island’s main town whilst taking in the sounds of the composition which mingled with those of the environment. (The public were presented with I-Pods on arrival and allowed to move freely through the town of Honmura listening to David’s work whilst visiting the ‘art houses’ installed among the residential homes of this fishing village.)

The composition itself was site specific. In fact Sylvian has said that the work isn’t really complete until the sounds of the town Honmura are incorporated into the listening experience. For the samadhisound release of ‘when loud weather…’ Sylvian incorporated some of the sounds of the island into the final mix. Whilst this obviously doesn’t compare to the experience of listening to the work in situ it goes someway towards creating an echo of it. In the process Sylvian created a piece which might find new and interesting interpretations in a variety of unanticipated contexts.

“I attempted to create a work that increased the awareness of other dimensions of reality whilst complimenting, contrasting, and extending those physically at hand. A multiple exposure, a layering, mapping reference points both real and imagined. The ‘loud weather’ referred to in the title is in reference to the emotional life of the island complemented by its spiritual ancestry and its influence on everyday life.”

This idea of the superimposition of landscapes and of a multi layered dimensionality came about due to the fact that the Chichu Art Museum, located on the island, designed by the architect Tadao Ando and owned by the Fukutake Foundation, is situated beneath ground level and housed in that structure are four of Monet’s water lily paintings. The 20th century French landscape of Giverny as seen through Monet’s eyes housed beneath the earth of a Japanese Island floating in the Seto Inland Sea. There’s even an interpretation of Monet’s garden, incorporating many of the plants he cherished, close to the entrance of the museum.

This work later became part of the permanent collection of the Museum in Naoshima.

In 2008, David further developed this concept of multi dimensional layering for the proposed project on the Canary Islands situated on the other side of the world from Naoshima. “When We Return You Won’t Recognise Us” – a 5.1 audio installation, was commissioned for the Bienal De Canarias, Gran Canaria, Canary Islands which took place in March 2009.

Having recently extended work on this 5.1 audio installation, Sylvian has reinvented the project for Punkt 2011 in association with Japanese visual artist, Atsushi Fukui, a long time Sylvian collaborator. Utilizing the large space of the museum, the installation will also embrace live performances, adding another dimension to the existent audio, created by artists associated with Punkt festival throughout the festival’s duration.