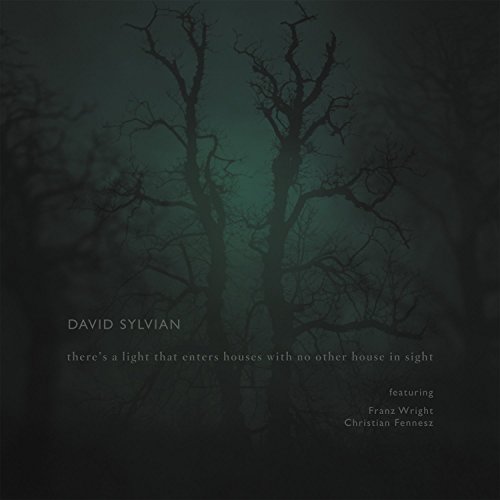 On November 24th 2014 the new album There’s A Light That Enters Houses With No Other House In Sight will be released on SamadhiSound (soundcdss024).

Samadhisound is proud to announce the release of David Sylvian’s new long form composition; ‘there’s a light that enters houses with no other house in sight.’ A unique collaboration with American Pulitzer Prize winning poet Franz Wright, featuring contributions from Christian Fennesz and John Tilbury.

The release will be available in three editions: A limited deluxe edition in an embossed cloth bound book featuring selected poems from Kindertotenwald as read by Franz Wright with contributions from three renowned photographers assembled by Sylvian to illustrate the edition. The second edition is a digipak showcasing photographic artwork by Nicholas Hughes. The third is a digital download with extensive digital booklet. All art directed by Sylvian and designed by Chris Bigg.

From davidsylvian.com:
“There is but one truly serious philosophical problem, and that is suicide. Judging whether life is or is not worth living amounts to answering the fundamental question of philosophy.” The myth of Sisyphus, Albert Camus

In September 2011, at the time of its publication, I read Franz Wright’s Kindertotenwald. I was familiar with Franz’s earlier work but something about the subject matter of this collection resonated with me as if my psyche had momentarily found an echo in tune with, but more eloquent than, its own internal voice. There’s a knowledge of the world in Wright’s work (not world weary but wary of the false note, pulsing with a current that comes from bearing witness to what’s ‘real’ whilst remaining vigilant of the tide of delusion and vanity that threatens to engulf us) that omits neither light nor dark but embraces both. Here’s a man who’s been to the other side and returned or remained to tell of what he’d seen, not without sacrifice, nor a wonderfully dark vein of wry humour.

On agreeing to take part in a brief tour with Stephan Mathieu and Christian Fennesz I came to the conclusion that it was better to find a focus for the work prior to touring than to attempt a form of free improvisation, not something I’ve personally explored or am experienced in. The starting point in my mind was Franz and Kindertotenwald. I was to meet Franz in his hometown of Waltham, Massachusetts, an hour or so from my own home at that time, and spent all too few hours in his company recording his readings. Franz, it has to be said, was gravely ill and stoically riding a considerable wave of heavy medication. That he took the time out to make the recording was remarkable and it turned out to be uplifting for the both of us and although Franz’s stamina, due to his condition, was limited, we managed to get enough of the readings onto disc before our time was up.

I composed the bulk of the material in transit on a laptop with no additional hardware. I thought of the piece more as a remix of many sampled soundbites, granulated and looped, carefully distilled elements drawn together to form ‘movements’ which worked in support of and/or complimented Wright’s readings. Christian, Stephan, and I took a rough form of this composition on tour with us in Sept-Oct 2013 working under the name The Kilowatt Hour. Once the tour was over and I’d spent enough time away from the blueprint I returned with the intention of elaborating upon the initial composition for future release. Christian recorded some of the beautiful additions he’d refined on the tour, John Tilbury brought his superior talents to compliment my own piano contributions and, with the addition of some samples from prior sessions with Otomo (Yoshihide) and Toshimaru (Nakamura), as well as some electronics of my own, the work was mixed, again, in transit as my life continued, indeed continues, to take unforeseen twists and turns.

Franz Wright has defied expectations and all prior prognoses and has returned from the precipice that is terminal cancer to a precarious, but passionately lived and thoroughly exploited, state of grace. He has been treated for lung cancer for four years now, and both he and his wife, Beth, have been through some incredibly trying times “…(which) I can only describe as like nothing I could ever previously have imagined, not even in dreams. Is death the mother of beauty? How one loves such huge sayings when young, and how oddly self-conscious they seem, logic dressed up in poetry’s clothing and thus ultimately shallow, like discussions about the unconscious which naturally cause it to flee. I cannot depict in any way the appearance of things in light of death’s imminence—With regard to writing itself, never have I felt such a wildly enthusiastic freedom , a willingness to try anything, a surefooted confidence that there is a perfectly simple and clear way, in a very small space, for a language conscious of its limitations and—I think of Orwell’s remark comparing good prose—I would add poetry, in many cases, ought to be like a window, one I suppose of crystalline spotlessness—the way it renders other things visible, beyond itself, not just itself…”

Thanks to David Nibloe we know that:

The title is taken from the prose poem ‘Nude with handgun and rosary‘ by Franz Wright. It is part of the collection ‘Kindertotenwald”, from which the readings at The Kilowatt Hour performances were taken.

NUDE WITH HANDGUN AND ROSARY

The small silver crucified man hangs between her breasts like an arrow directing attention away from the face in its nimbus of unasked-for beauty, all that stands between her and apparition, while pointing the way to the ever inexplicable V, all that’s left of her animal: damp, like the tip of a painter’s brush just dipped in darkest blue. She has put the thing on like a necklace and gone to admire it in the full-length mirror, in muted light the color of gold’s shadow at this late-afternoon hour. There’s a light that enters houses with no other house in sight. Ho
w describe it? But then there are more important things to think about than light. It lies on the dresser blackly glowing, the one object that’s completely self-explanatory here. Just look at you, child with the sun-colored eyes, waiting in line with love’s innumerable patients and their grievances at scarecrowlike standstill, how slowly, how badly, they mend; just one more being tested, in need of new double-thick Coke-bottle glasses, straining in the poor light to make out the oversize letters of their own obituaries while they’re waiting to be born… Soon, soon, between one instant and the next, you will be well.

There is a sound that comes from houses with no other house in sight.