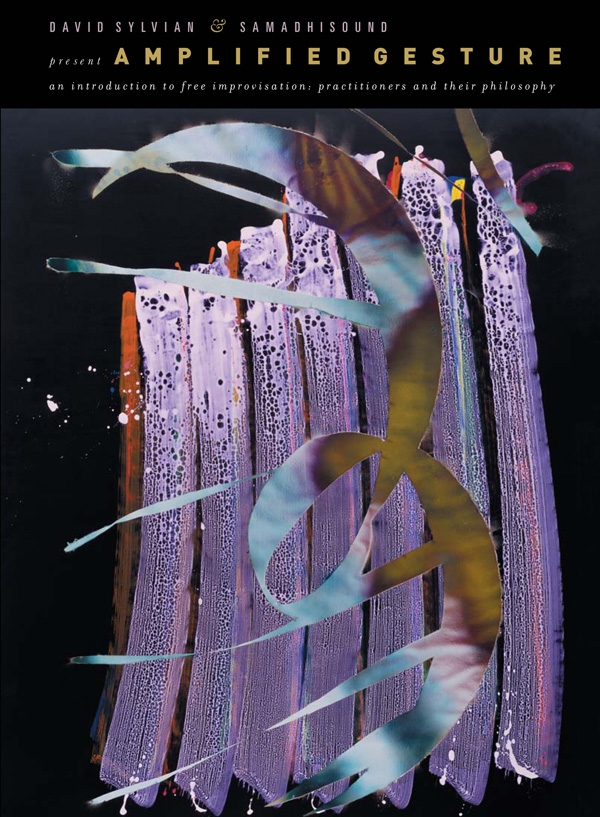 To be released on January 21st: the new DVD by David  Sylvian on Samadhi Sound (SSDVD01).

Featuring ‘Amplified Gesture‘ by Phil Hopkins (73 minutes 44 seconds), ‘Coaxing or Pummelling?‘ (An introduction to certain improvisers) by Clive Bell and  ‘A man of no significance‘ by David Sylvian (7 min 32 seconds).

Standard Edition presented in a dvd digipak (with a matt laminate and spot gloss finish) featuring artwork by Katharina Gross, art direction by David Sylvian, designed by Chris Bigg. No news yet about the extended/limited edition.

Amplified Gesture was first released in 2009, within the deluxe edition of David Sylvian’s groundbreaking album, Manafon. The film explores the journeys and philosophies of a select group of experimental musicians including Keith Rowe, Evan Parker, Eddie Prevost, Otomo Yoshihide, Toshimaru Nakamura and Christian Fennesz. Intimately and eloquently, these exceptional artists reveal themselves through their ideas and working practices, creating a captivating document of a thriving and endlessly renewable music scene.

Revised and re-visited, this DVD release features a new chapter, titled ‘The Collective’, in which contributors explore political questions arising both within and outside of their respective musical ideologies. In addition to artist biographies, the disc also contains interview excerpts and outtakes on a range of subjects; Fennesz talks of the notions of ‘depth’ and ‘impact’ within his sound world, while John Tilbury discusses Cornelius Cardew and Keith Rowe reflects on the role of architecture in AMM’s performances.

Also included on the disc is a short introductory film, written, directed and narrated by David Sylvian. ‘A Man of No Significance’ documents the journey and modus operandi of the Manafon recording sessions and the creative rationale for the production of the film.

In 2009 David Sylvian released Manafon, one of the riskiest, most adventurous albums of his career. The culmination of years of studying the techniques of free improvisation and automatic writing, Manafon is built on ensemble performances by some of the world’s leading improvisers. To accompany that release, Sylvian produced the documentary Amplified Gesture, featuring in-depth yet accessible interviews with the practitioners of this craft. Previously available only with the deluxe edition of Manafon, the documentary now sees a well-deserved standalone DVD release that includes new material and a short documentary by Sylvian, “A Man of No Significance.”

Directed and edited by Phil Hopkins, with interviews conducted by Nick Luscombe, Amplified Gesture takes us to the studios and workspaces of eleven leading improvisers across Europe and Japan – from legends like saxophonist Evan Parker to rising stars including Christian Fennesz. Their conversations teach us about improvisation as a practice and as a culture. “The aim was to pique the interest of the audience in the hope that they would wish to find out more,” says Hopkins. “I do think there are insights in this film which apply to anyone concerned or connected with other kinds of artistic endeavour. By focussing principally on the ideas and philosophies, I think we arrived at something quite ‘pure’.”

“There’s isn’t, to my knowledge, a comprehensive film on this subject, these musicians, the history of free improvisation as seen through the eyes and ears of its European practitioners,” says Sylvian. “It’s a unique branch of the evolution of free jazz through to free improv, a story that’s not adequately been told on film. We attempt to touch upon the opening of the East to these influences and the significant impact artists such as Otomo Yoshihide and Toshimaru Nakamura have had upon the scene, and how that exchange broadens the conversation, contributing to an ongoing evolution of ideas.”

Keith Rowe and Eddie Prévost recall the birth of England’s groundbreaking ensemble AMM, while in Japan’s younger onkyo scene, practitioners such as Yoshihide, Nakamura, and Sachiko M describe their relationship with machines that defy mastery, like Nakamura’s no-input mixing board. Their discussions range from how they first began this practice – leaving behind old idioms and popular music in pursuit of the unknown – to the unending process of learning from their collaborators, their instruments, and the ever-changing circumstances in which they find themselves. As saxophonist John Butcher explains in the film, “It wasn’t an idiomatic choice you were making. It was a life choice, about how you wanted to approach life, and how you wanted to approach creativity, and how you wanted to approach music.”

Instrumental outtakes from Manafon provide the score, but the documentary eschews that project to focus on the musicians, and the almost fifty years of history and discovery that they represent. To tie the two projects together, Sylvian has produced a new short film shot at his home and studio in New England. In voiceover he discusses his own study of free improvisation, from the first time he discovered Derek Bailey’s Aida in his twenties, to his efforts to incorporate improv and automatic writing into his compositions and songcraft. This new feature joins other outtakes including longer interviews with Fennesz, Rowe, and John Tilbury.

Free improvisation is a field that is rarely documented and often misunderstood. This gorgeously-filmed and quietly intriguing documentary will lure in new listeners, while rewarding fans with new insights and rare glimpses into the hearts and minds of these musicians – the pioneers who commit to improv as a form, a challenge, and a lifelong journey.