Home Articles and Interviews Transcripts The Man who would be Invisible (i-D, November 1987) 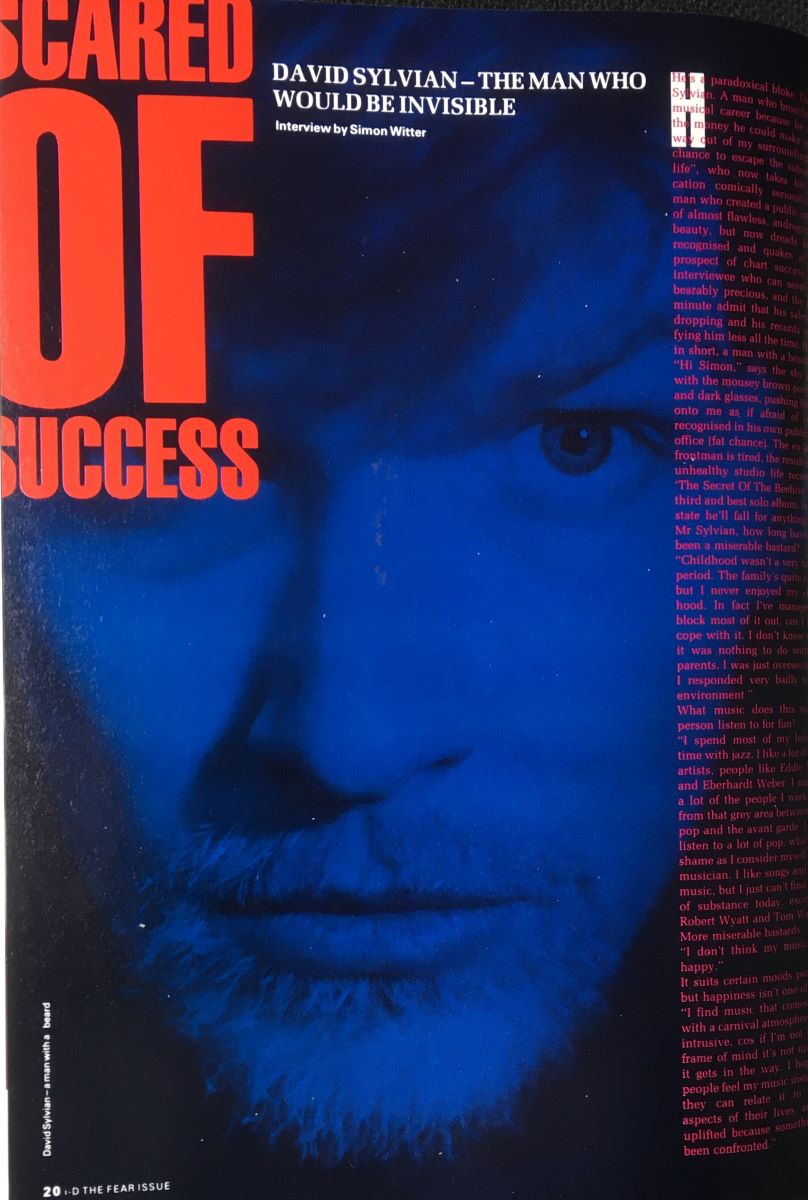 Scared of Success: David Sylvian — The Man Who Would Be Invisible
Simon Witter, i-D, November 1987

HE SIDLES, HE INSINUATES, HE WEARS DARK GLASSES – THE MYSTERIOUS MAN OF POP IS BACK. DAVID SYLVIAN HOPES HIS NEW ALBUM WON’T BE TOO SUCCESSFUL, AND CLAIMS “THERE’S ONLY ONE TRUTH”. i-D WONDERS WHAT IT COULD BE.

HE IS A paradoxical bloke, David Sylvian. A man who broached a musical career because he saw the money he could make as “a way out of my surroundings, a chance to escape the suburban life”, who now takes his vocation comically seriously. A man who created a public image of almost flawless, androgynous beauty, but now dreads being recognised and quakes at the prospect of chart success. An interviewee who can seem unbearably precious, and the next minute admit that his sales are dropping and his records satisfying him less all the time. He is, in short, a man with a beard.

“Hi Simon,” says the shy man with the mousey brown ponytail and dark glasses, pushing himself onto me as if afraid of being recognised in his own publicist’s office (fat chance). The ex-Japan frontman is tired, the result of an unhealthy studio life recording The Secret Of The Beehive, his third and best solo album. In this state he’ll fall for anything. So, Mr Sylvian, how long have you been a miserable bastard?

“Childhood wasn’t a very happy period. The family’s quite close, but I never enjoyed my childhood. In fact I’ve managed to block most of it out, cos I can’t cope with it. I don’t know why, it was nothing to do with my parents, I was just oversensitive, I responded very badly to my environment.”
What music does this sort of person listen to for fun?

“I spend most of my listening time with jazz. I like a lot of ECM artists, people like Eddie Willy and Eberhardt Weber. I suppose a lot of the people I work with from that grey area between jazz, pop and the avant garde. I don’t listen to a lot of pop, which is a shame as I consider myself a pop musician. I like songs and vocal music, but I just can’t find much of substance today, except for Robert Wyatt and Tom Waits.”

“I don’t think my music’s unhappy.”

It suits certain moods perfectly but happiness isn’t one of them.

“I find music that comes along with a carnival atmosphere quite intrusive, cos if I’m not in that frame of mind it’s not uplifting, it gets in the way. I hope that people feel my music inside, that they can relate it to certain aspects of their lives, and feel uplifted because something has been confronted.”
If your lyrics confront anything, they don’t do so in plain English.

“My lyrics are triggers to the imagination, which the music takes on from there. On this album I’ve tried to be far more expressive, I’ve even used allegorical storylines. That’s why the backing is very simple, to emphasize the strength of the lyrics.”

The Secret Of The Beehive is a far simpler Sylvian sound, very song-heavy, with other musical contributors just recreating ideas from his home demos. It’s a great record, but he doesn’t sound any happier, despite claiming that life has been getting better by the week since Japan split.

“Well, writing has become a need for me, an exorcism, laying ghosts to rest. It’s how I confront my own life best, and sometimes there’s less joy in it than necessity. And recording has become increasingly difficult. It has got to the point where I finish recording an album and I only want people to hear two tracks. I want to communicate something perfectly to the listener but, since I left Japan, the gap between what I’m aiming for and my ability to convey it has been getting bigger all the time.”

But you’re just trying to please yourself. Compared to the comedian — who has to justify the hard-earned money spent on his act — you’re onto a really cushy number. You agonise introspectively, exorcise your own ghosts, and people pay you six quid for the pleasure. What does your music do for people?

“I write for myself, but I’d hope the listener experiences some of the pleasure I’ve had. Of course personal experiences are far more valuable than anything you can experience through the art world.”

Life should have its priorities, but don’t people have the right to laugh and forget?

“I started writing that song (‘Laughter & Forgetting’) as something tongue-in-cheek and pessimistic, but I ended up reacting to it positively. It’s right to be able to forget, and overcome certain obstacles. I tend to hold onto certain negative things in my past. It’s a struggle to put them behind me, accept them.”

So what does make you laugh? People hurting themselves?

“My friends make me laugh. I laugh very easily.”

BRILLIANT TREES was my introduction to Sylvian’s world. So what were Japan really all about then?

“There wasn’t much of an idea behind Japan when we started. We were surrounded by people who were totally unsympathetic to us as a group of musicians, maybe rightly so, cos I don’t think our first releases showed any kind of promise. We were being bullied into commerciality, and after two albums we knew we had to change or give up. On the third album we finally found a sympathetic producer, we got a grip on ourselves, and our real ideas began to emerge. We think of that as the first Japan album.”

You once said that pop music is about borrowing from other cultures without understanding. Surely Japan were mega-guilty of that? Now that your fascination for the Orient is less loud and public, it’s probably a far more profound influence.

“Yes, I think so. When the influence surfaces in my music now I’m usually not aware of it. It used to be very superficial, incorporating certain elements into pop, but now it has helped me to understand a certain side of myself that was already there.”

Are you dressing not to be noticed nowadays?

“I dress for comfort. I’ve been wearing this kind of thing for years — soft shoes, loose trousers and shirts. Sometimes I wear the same clothes for years. The whole idea of presentation through clothes doesn’t interest me. I can’t take the idea of a public image seriously, and I don’t follow any designers.”

So your mum bought those Japanese designer items you’re wearing?

“I tend to do most of my shopping in Japan. I’m not sure that I ever was conscious of fashion.”

And I won the Nobel Peace Prize last year. The Japan years, David?

“I created an image that I knew would be picked up on, but I couldn’t handle the recognition. I’m a very quiet, frightened person, and I rather naively didn’t anticipate the intrusion into my private life. My image wasn’t a facade, it was part of me, something I lived, and I couldn’t take all the trivia. When my outlook on life changed, I thought it was a side of my life I could completely do away with.”

Your immaculate presentation must’ve required a degree of vanity.

“Absolutely. I wanted to back away from that attention, but I felt the image was what people expected of me.”

What part of the image were you living, an ideal of beauty and perfection?

“I was never vain enough to see myself as an ideal of beauty. Maybe making the best of what you’re given.”

David says his music stays on the right side of the fine line between artistic adventurousness and commercial blandness because its content relates to an inner truth. He’s not sure what it is, but the more you’re aware of it within yourself, the more you recognise it elsewhere. What more did you expect from a working class kid who applies Dostoyevsky and Truman Capote’s theories of form to music? Maybe all you need to know is that David is a tender, private, likeable person, or that his tuneful, acoustic ‘Beehive’ will be making him a lot of new friends.

“I’m enjoying my anonymity at the moment. I don’t want my singles to flop, but I always dread them becoming too successful. I don’t want to be a star again.”

And stack say all of us!