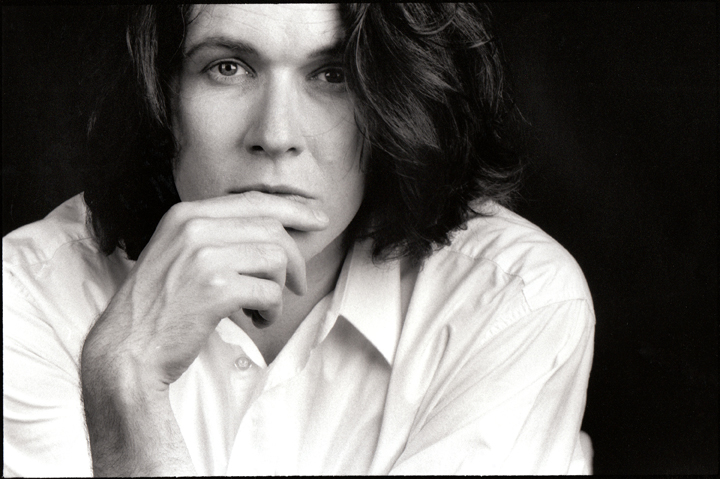 David Sylvian has little time for his last group, glam rockers made good JAPAN, so why has he chosen to team up with his old cohorts again as ambient moodies Rain Tree Crow? Simon Dudfield puts it down to the peculiar flight path of `true art’. Seconding that emulsion: AJ Barratt.

David Sylvian is putting the nails in place and hammering them home with carefully chosen words. He is making sure the coffin, in which he laid Japan’s beautiful corpse, is securely closed.
“It doesn’t mean anything, the whole of the Japan era was ….misguided… What I feel about the work with Japan is that at the centre of it there’s an emotional void. Although there’s some odd ideas which were reasonably pulled off here and there, on the whole I don’t think the work is that interesting or that it stands up to much scrutiny.”
“I’m neither ashamed nor proud of what Japan did. It’s just history… if people want to somehow keep that period alive for themselves it’s really up to them but they’re fooling themselves. Maybe it’s a fantastic form escapism for those e people who build their existence around the fact that there was once a group called Japan. I think they’re missing so much in life. There’s so much more in life for Christ’s sake!”
“I feel totally detached from it. I don’t relate to it at all. I felt complimented of flattered by that then I’d say so. I don’t. In fact most of the time I find it irritating, in that they’re highlighting an area of my work that I was involved in, in which I place no value myself.”

Dressed in a pair of green velvet trousers, white shirt, brown cord waistcoat and ankle-length green duffle coat, his hair hanging below his shoulders, round glasses resting atop his nose, this is the man who was once voted the most beautiful in the world; who, as lead singer of Japan, created the world’s most perfectly glamorous pop star.
Check out the covers of `Gentlemen Take Polaroids’ and `Tin Drum’ for proof. David Sylvian still inspires hundreds of fans to gather annually to celebrate the persona he created. This is the man whose image was so strong, disaffected youth still impersonate his old hairstyle and tastes. This is the man who had huge, everlasting devotion before Morrissey had any friends.
Sylvian is genuinely surprised by the interest caused by the news of the four original members of Japan working together again under the name Rain Tree Crow.
Mind you, he is also blissfully unaware that our interview falls upon Comic Relief day. The reunion was Sylvian’s idea. His last two albums, both collaborations with ex-Can member Holger Czukay, “Plight And Premonition” and “Flux And Mutability” were largely improvised.
Taken with the idea of this method of recording, he concluded it would be more interesting with a larger group of musicians. He began to think in terms of a conceptual band using the same name but different musicians for each album. To gauge the strengths and weaknesses of such an idea he decided to test the waters with people he knew. As yet `the boys in the band’ (as he refers to them) are not aware of this. The single “Blackwater” and eponymously titled album will certainly be one-offs.
“My relationship with the boys in the band has ended. It’s not something I feel particularly negative about, but that doesn’t mean I rejoice over it. But having made this album, musically we did something on this album that if we had been mature enough ten years ago we would have tackled. There are pieces on this album I see as being representative of this band working at it’s best and that’s enough for me. We’ve done it and I feel happy about that.
Fulfilled by it. If that’s a way of saying goodbye to one another professionally and personally then I can live with that.”

THE GOODBYE nine years ago was a bitter affair, with Karn and Sylvian not talking for four years after. It was an ugly end to a beautiful group. Japan, for those who may not remember, were a band that mattered. Whether or not you liked them shaped your outlook on life and often determined the friends or enemies you made. People always had an opinion on them. It was similar to liking the Manic Street Preachers now. You got a buzz from them because as much as you adored the band, you knew someone hated them twice as much.
Thinking back it was probably escapism in its fullest sense that drove people towards Japan. A rebellion that was as real as Sylvian’s image.
From their inception in 1976 Sylvian (David Batt), his brother Steve Jansen (Batt), Richard Barbieri and Mick Karn (Anthony Michaelides) never made it easy on themselves. The first two albums ‘Obscure Alternatives‘ and ‘Adolescent Sex‘, missed the fag-end of glam rock by several years. Both albums were desperate attempts to ape The New York Dolls (from whom Sylvian and Jansen both took their surnames). Sylvian refers to these albums as awful errors and examples of the lengths he would go to escape the environment he was brought up in.
Radically new direction was sought on the third album, ‘Quiet Life‘, on which Sylvian first began to come to terms with who he was and what he didn’t want. What he didn’t want was the adulation of millions of young women. It took two more albums with glamorous looks intact, ‘Gentlemen Take Polaroids‘ and ‘Tin Drum‘, for him to realise what he didn’t want. The song ‘Ghost‘ on the final album was the turning point that made him realise he could speak about things close to him; forget about all the decoration and image and push his own personality through the songs.

SYLVIAN IS now 31. He still smokes Disque Blue cigarettes but almost everything else has changed. He is far removed from the young man that once described a song as being “about shagging a Chinese girl”. His three solo albums ‘Brilliant Trees‘, ‘Gone To Earth‘ and ‘Secrets Of The Beehive‘ have brought him a mature audience. And audience who are more concerned with the quality of the music rather than the prettiness of its creator. His removal from the public eye has given him a chance to breathe, to evaluate his self. His values and reasons for making music are completely different.
“Everything I talk about comes over as serious because I care about it so much. But actually in my life it’s a pure joy and therefore not related to stuffiness or melancholy.”

“A lot of people listen to my work and tell me it’s so dark and intense. But to me the work is all about love. It’s about a real joy of life. You have to show the negative to allow people to see the positive. If you just jump up and down all the time and say isn’t life wonderful you alienate people, you don’t draw them in. All the most wonderful works that have influenced me are works that present a kind of negative you respond to and leads you through the point of calm where it’s possible to understand. That’s where the joy creeps in.”

This asks a lot of the listener I tell him. “Why not?” smiles Sylvian. “My work is to aid the listener, to create the centre within themselves which is quiet enough for them to ask the first question. And it’s the question which is important, not the answer. The quality of the question that’s important. If you ask a question of yourself that’s the first step to self-awareness. If art can create that space within the listener or viewer or whatever and somehow set the parameters within which that question can be asked that’s the most you can ask for. The function of art in society is its role as a kind of sensitising process.”

Sylvian has asked himself these questions partly to make contact with his self and partly because he believes the more you understand yourself the more you can give to other people. He has even undergone professional analysis to find out more about himself. By being this open about his life, by dropping all his disguises, all the crutches he once hid behind, he is putting himself on the line perhaps more now than even when he first glammed it up all those years ago.
Sylvian has found an inner peace that has nothing to do with a stolen name or a blond fringe and which nothing or no one can steal away. He is happy.