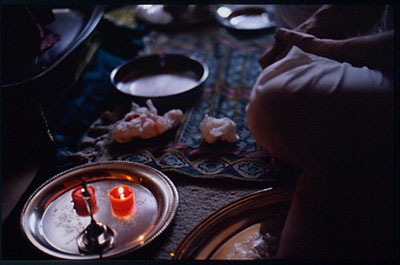 David Sylvian’s Latest Ambient Work Was Made for Art Shows but Sounds Great in the Living Room
Since the split of U.K. quartet Japan in 1982, David Sylvian has crafted many meticulous albums — both solo and alongside collaborators such as Holger Czukay, Robert Fripp, and Ryuichi Sakamoto — imbued with experimental atmospherics and amber-hued vocals, including 1999’s DEAD BEES ON A CAKE. Sylvian talked with bn.com’s Kurt B. Reighley about his latest, APPROACHING SILENCE, which consists of instrumental works originally featured in art installations.
barnesandnoble.com: These pieces were created for art installations. How would you like APPROACHING SILENCE to function outside the gallery?

David Sylvian: The music was placed in the installations to encourage people to rest, to stay, and to prolong the experience as long as possible. It’s very meditative and, if you’re a willing participant when listening, allows a slowing down to take place. I reworked the pieces to a point where they can exist without the visual stimuli.

bn.com: How do you structure and arrange your ambient works?

DS: I’ll decide on the direction of a piece, and then, either alone or with other musicians, begin to improvise the piece into taking some kind of rough shape. I’ll work with that original improvisation extensively, remodeling it, creating a more defined form, until I begin to recognize something that I can work with. I enjoy working from the unknown and just allowing something to come into shape.

bn.com: Is there a connection between APPROACHING SILENCE and your albums with Holger Czukay [PLIGHT & PREMONITION and FLUX AND MUTABILITY]?

DS: I’d dabbled with the notion of improvisation in some soundtrack work prior to working with Holger, but I’d never really taken it as far as we did together. We started to improvise one evening and went on until the next morning, and at the end, we had the material that became PLIGHT & PREMONITION. I really enjoyed the process of writing and recording in that manner, and that idea of improvisation accompanies me now on most of the projects that I get involved in.

bn.com: How does composing instrumental pieces influence your songwriting?

DS: They fuel one another. When I’m working on songs, particularly when I’m recording, I’ll have ideas for instrumentals. In a sense, they’re made from the glue that holds some of the songs together; taking a 30-second fragment, slowing it down, and exploring those elements texturally and sonically. Instrumental work affords me a break with more traditional songwriting but allows me to keep working in music, which in turn allows me to return to songwriting with a greater sense of enthusiasm.

bn.com: What’s your next project?

DS: A compilation album has been in the cards for a while, but I have trouble looking back. But as I’m living in between one place and another, I thought now would be a perfect time to readdress some earlier material. There’s quite a wealth that’s never been released before. I’m going to have a crack at finishing the only Japan track that was never completed, which is beautiful but didn’t fit comfortably on GENTLEMEN TAKE POLAROIDS. And I’ve recorded a new vocal for “Ghosts.” There’s going to be a fair amount of new material in the overall mix.