One page mini interview in the March 2012 issue of Mojo (UK). The page features a self portrait by David Sylvian

ART ROCK’S ESOTERIC CHAMELEON, IN HIS OWN WORDS AND BY HIS OWN HAND

I describe myself as … stubborn, lazy, but with a thirst for knowledge, a desire for alternate experiences, a provider, a father,an inept comedian. I’m honest, tender, deeply affectionate and loyal as a good dog. I’m a contradiction. I love company, particularly that of women, but given the option of permanent companionship of any kind and solitude I’d choose the latter. I guess that makes mea loner.

Music changed me …&nbsp; by initially taking me outside of myself, showing me there was a bigger, broader,emotionally richer world out there to which,at that time, I had limited access. It gave birth to aspiration. Later, it got in the way of my leading a productive life devoted to truthful self-expression or exploration of beauty. Later still, bridges burned, I realised this could indeed be realised in such a life.

When I’m not making music … I’m making music.Music isn’t simply the physical act of creation. It’s a permanent presence at the forefront or back of your mind.
It circles the murkier waters of the subconscious looking for a focal point. Something’s always at work gestating, ruminating. You’re on all of the time. It makes you a lousy companion for long distances, really good for short ones, and a great listener.

My biggest vice is … my impulse to undermine what’s in my best interests.

The last time I was embarrassed was … I’m easily embarrassed so this happens frequently. Last time would’ve been about a week ago, having my back seize up in a public space where many good-hearted people ran to my aid.

The last time I cried was … recently. Caught a glimpse of a documentary, watching an Asian American father sitting next to his now grown daughter, talking of the abuse she received, abuse that he was completely ignorant of at the time it was happening, at the hands of the local priest whom he let into his home at the start of every morning as he left for work. Heartbreaking.

Vinyl,CD or MP3 … ln general, I no longer care. Physical objects made with love can have quite a hold on me though. This is frequently not the case with LPs or CDs but for those rare objects that are, I’ll spend time seeking them out.

My most treasured possession is … Gifts/objects/art my children made for me. Offerings from my guru.

The best book I’ve read is … This week, Kindertotenwald by Franz Wright.

Is the glass half full or half empty … The pendulum of our emotional lives is in motion swinging from sorrow to joy, love to hatred and back. The trick is to hold the pendulum still, to feel complete in that stillness and simply Be. This is described as the full ness or the emptiness of being which shows how inadequate the description of the experience is. The contents are perfect as they are. To will it to be one thing or another causes desire. Desire is the cause of suffering and keeps the pendulum in motion.

My biggest regret is … listening,despite my instinct to the contrary, to those I shouldn’t have as a young man. Not seeking help sooner than I did.

When we die … If death is the end then all that we were will no longer be. If life goes on the ego’s sense of self will not, it will fade slowly like an irrelevant dream. What remains will merge with the sea of spirit of which there’s varying depths and multifaceted dimensions. In either case I will no longer exist which is an exhilarating notion.

I would like to be remembered … l’ve no wish to be remembered. I would hope my daughters would have a place in their hearts for me for their own wellbeing. That they’d know how much they were loved. Ditto friends left behind. If something of a benevolent nature comes of the work I’ve produced I hope it’d be likea balloon loosened from its bindings, floating free without a trace of ownership. 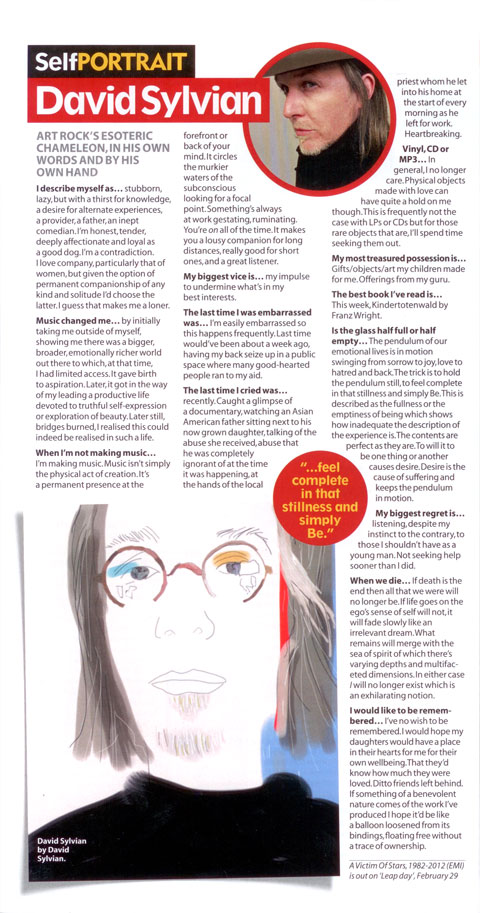