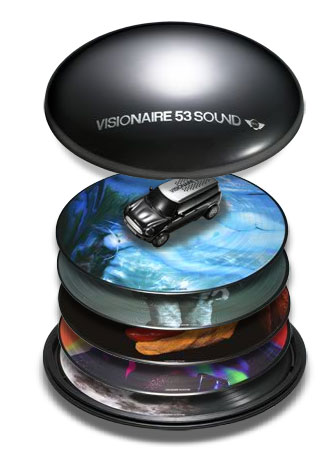 A stunning 5 LP/2 CD Box Set with a mini clubman mini-record player all in one neat-box. Part of a numbered limited edition of 4,000 only.

The 5 records are ackaged inside a domed case that also houses a custom-made Mini Clubman “Vinyl Killer” Record Player: a battery-operated toy car containing speakers and a needle. As the little car drives along the record’s groove, it plays each track, acting as a fully portable record player and sound system.

These contributions amount to over 100 minutes of previously unreleased audio experiments, samples, spoken word pieces, and even actual songs. The images on the picture discs were created by a number of artists you might recognize from their work on your favorite album covers, including Peter Saville, Cindy Sherman, Raymond Pettibon, and Robert Longo.

The issue also includes 2 CD’s with all the sound content, and a booklet of credits and instructions.

Gallery
Tracklist
5 3 Before And Afterlife