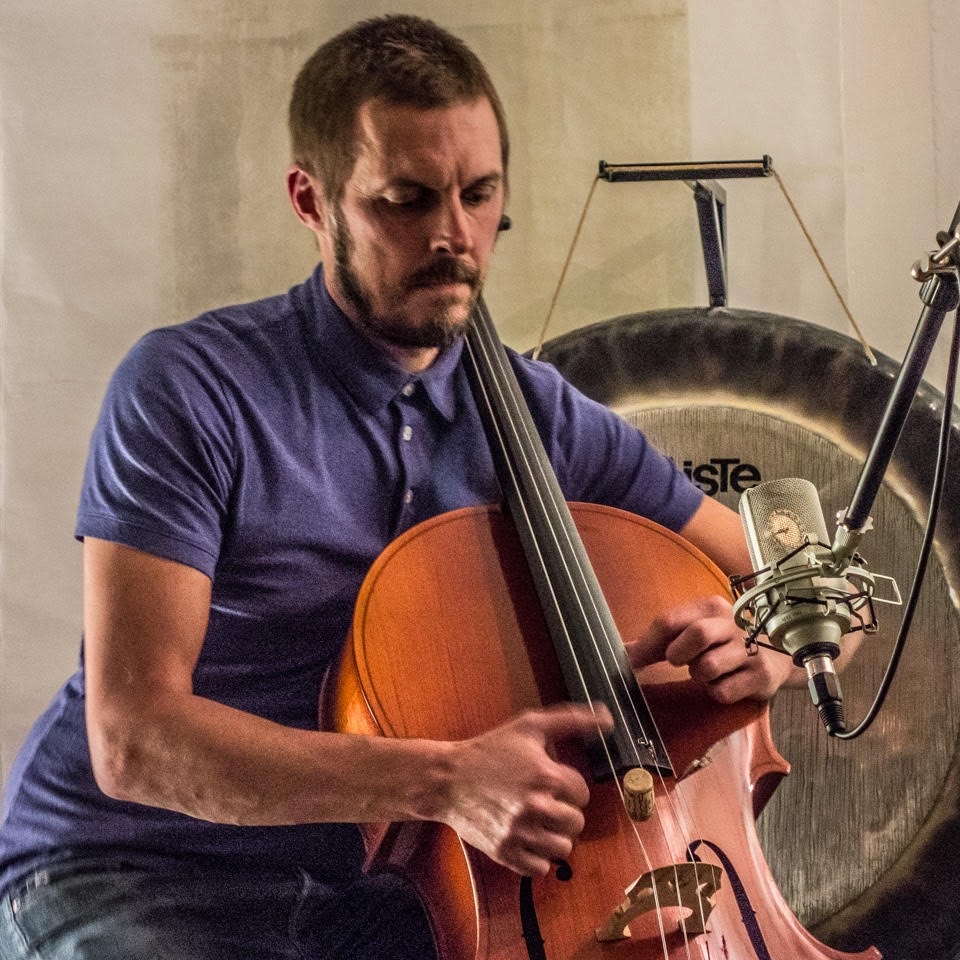 Andrea had an extensive e-mail exchange that lasted almost a month. The result is a great article on paynomindtous.it and with Andrea’s permission, a small excerpt is included here.

AD: Hi Mark, thank you so much for your time. I’d like to start our conversation from the present, so from what’s going on for your label in this moment, talking about one of your latest release: the new David Sylvian (and Jan Bang) ep “Playing The Schoolhouse” that you released on cd this October in a limited edition of 300 copies. Being a big David Sylvian fan, I have to admit that I came to know about your label through David’s announcement of his new record coming out. I was intrigued by his choice of using another label to release the album: being the ep the first release in a very long time he’s not putting out on his label Samadhisound, which is due to end this year. Taking a look at the musical cross section that your label offers (free improv, free jazz, experimental) I began wondering how “Playing The Schoolhouse” would sound, and when I received the record and started diving into it, I was surprised even if somehow I knew what to expect.

There is little much said on the recording itself: what we know is that the ep is based on an improvisation session by Sylvian and Bang that took place in the schoolhouse of Ny-Hellesund, Norway, in March 2015. There are no proper instruments played in the recording itself, infact both Sylvian and Bang played “found objects” and used samples (by Otomo Yoshihide, Toshimaru Nakamura and Dai Fujikura) and field recordings in order to add other layers and depths of sound. So would you tell us a bit more about the record and how the collaboration with David was born? Why an ep? And what did fascinate you about this piece? Long question short, would you please tell us the story behind “Playing The Schoolhouse”?

MW: During the spring of this year, David and I had been messaging one another on a number of different subjects, the origin of which had been an order he had placed for various new releases from Confront Recordings. Leading into this period, I’d begun thinking about a sub-series on the label, focusing on shorter pieces. The original intention was to release them on 3″ CDs mounted on heavy weight, printed board sleeves. It was the simple combination of time and place that I happened to ask David to participate. I work purely on intuition: if it feels right, then it must be worth pursuing. As with every release on Confront, the artist is at complete liberty to submit whatever material they feel appropriate. I make no demands or changes, just the initial offer. With ‘Schoolhouse’, David created a piece that’s completely true to his current impulses and totally in line with label philosophy.

AD: I imagine how gratifying is to know that your work is appreciated by such an artist. So was it around that period that you personally came to know Mr Sylvian or were you already artistically in contact? And how did the proper realisation of the release go?

The ep is now presented in a dvd-sized tin metal case with no cover (as usual for the large majority of the label’s releases) that includes the cd and a postcard with a photograph by Sylvian itself. So how did your original idea of the packaging change?

MW: Between 2001 and 2010 I used to own a record shop and mail order service in London and we used to stock Samadhisound direct from David and his management, doing especially well with “Blemish” when that was first released and eventually Derek Bailey’s “The Blemish Sessions”. David used to order records from our selection too. This relationship continued on and off until I eventually closed the business. I continued to run Confront Recordings but my release schedule slowed down considerably until 2013/14 when I resurrected the label with renewed energy and enthusiasm. Spring 2015 David got in touch and our relationship has accelerated since. Try as I might, I couldn’t get the right feel for the design of the original proposal for the sleeve. I also got a bit of negative feedback from my distributors about 3″ CDs, people being unable to play them on computers. So I reverted to the DVD metal tin with postcard format which had proved successful for a couple of other limited edition releases, “Membrane” and “Contest of (More) Pleasures”.

AD: I noticed how this year the label did very well, both in terms of number of releases and quality wise as well. The ep’s success was infact extraordinary: it sold out in a matter of hours and you had to plan a second release given the huge amount of requests you received in the last couple of weeks. Were you expecting this level of interest?

MW: Ah yes, it did sell out very quickly! I must admit, I was completely unprepared for that. Originally it was going to be just 200 copies! I’m glad we up it to 300 …. but in hindsight, it should have been double that at least. That’s my only regret, leaving so many people unsatisfied and ultimately fuelling the eBay market, selling at unreasonable prices. I was ignorant to the demand of this particular release and was measuring it by normal standards for a release on Confront, whereby 200 or 300 hundred would be appropriate for a first edition. But hopefully I’ve redeemed the situation with the second edition, currently 600 copies have already been pre-ordered with more orders to come I’m sure. So plenty of continued interest in Schoolhouse. I’d like to add that regards the original edition, David graciously donated half of the copies that were due to him for personal use, back to Confront, to help fulfil the demand.

AD: Talking about the music now, I found “Playing The Schoolhouse” fascinating, demanding but at the same time a pleasant listening. It certainly follows and develops the path initially started with previous records such as “Manafon”, “Blemish”, “When Loud Weather Buffeted Naoshima” and “There’s A Lght That Enters Houses With No Other House In Sight”, but it actually feels like something different, as if with this release he wanted to push himself into another area of his musical vision, almost at its most extreme point. In “Playing The Schoolhouse” the music, intended here as musicality, disappears and what remains is pure Sound. Only the hands and their actions are left, creating (and manipulating) sound with objects that become “instruments” in the proper meaning of the word: tools between a hand – and a person, and his will – and an idea, a final result. If I should explain the piece to someone who never listened to it I would say: hands playing a space. I think that’s the most relevant point of the ep: as the title suggests, Sylvian and Bang are actually playing a space, a building and its objects, its atmosphere. Do you think (or imagine) that this concept was the original ideal behind the piece? And if not (or if so), how do you perceive it?

MW: It’s clear from your description that you’ve thought long and hard about the piece. Quoting myself from a previous answer, the piece reflects what I generally meant about “working intuitively”, reflecting “time and place”, the here and now of artistic endeavour. David and Jan utilise the space and the materials within. Other less obvious contributions should be taken into account, their mood on the day, friendship, shared experiences, individual thought processes, the air between each other and objects, the atmosphere within the building, the weather outside …. all feeding the end result. My view is that it shouldn’t be viewed or listened to as a finished article, absorb it more as a feeling or fleeting emotion, a movement or passing, a mood. Just have it touch you as you move through it.

AD: Zooming out back to Samadhisound (Sylvian’s label), how do you see its imminent closing? I’m wondering if it’s simply due to economical problems or to other personal reasons: maybe a fullfilment of its original purpose or a desire to go somewhere else in David’s will.

MW: Perhaps that’s a question better directed at David, for a more personal and detailed answer. But as far as I’m aware, the everyday work load and financial expenditure versus actual income doesn’t warrant keeping the label going. Together with David’s management retiring after 32 years, has clearly forced a difficult decision. It’s such a shame, so much love goes into it, but it’s the new reality, as far as recorded music is concerned. There is very little in the way of profit to be made, the most you can hope for is the cover your costs and net a small dividend that enables you to release another album. And so the cycle continues until you stop.

AD: In the announcement regarding “PTS”‘s sold out first edition, David remarked his admiration for your label and for your way of running it, defining your approach “a labour of love” that “brings to light work which might otherwise never be heard”. Even if yours may be considered a smaller label, I see a strong similarity between Confront and Samadhisound, being both the work and the passion of one person (and a musician) and representing both a very personalized overall musical vision and research, not based on the search for economical success or massive validation by the bigger audiences. So would you please tell us the story of Confront Recordings? How was the label born and out of what kind of necessity? Did the experience of owning Sound 323 (your record shop in London) inform the way you see (or own) a record label? And why is it called Confront?

MW: Originally, I established Confront Recordings purely as a platform for releasing my own music. That was the initial idea. It was 1995 and I’d begun playing concerts and making contacts on the local and London scene. One of my earliest associations was with a percussionist and violinist called Nick Smith. He was very encouraging to me and forever enthusiastic. Slightly older, he’d had more experience than I and set about organising rehearsals, a concert series and recordings. Out of this relationship came the debut release on Confront, Collision Duo ‘Refraction’ in 1996, an edition of 50 cassettes. It received a couple of reviews in the underground press and I began selling copies on gigs and through mail order. As my connections in the music grew so did the label. The early releases reflect the projects in which I was involved at the time and friendships of the period. All were London centric, the international reach of the label coming a little later, in line with the development of my own career as a musician. The label came long before the shop and has survived long after too. Having the shop certainly helped the profile of Confront and establish it more firmly. Guess the label is here to stay. Hopefully, as the name suggests, still confronting people expectations of music and sound.