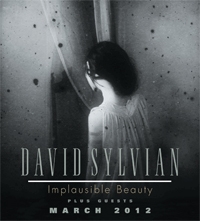 Unfortunately, the Implausible Beauty tour has been cancelled.

There have been questions raised regarding my health and the possibility of future tours. My health is improved, something for which I’m immensely grateful, but it’d be jumping the gun to start putting a tour together at this early stage. Better to reach a state of full recovery and start over from there. I can’t guarantee that there will be a tour, I can only say that I remain open to the idea in principle. Due to the cancellation of the last tour I’ve undertaken a number of other projects which are keeping me busy and have my full attention at present. The point is I can’t undo what’s been done and am therefore not thinking about recreating the previous tour as that’s already out of step with current events, nor am I planning another. Many stars have to align to make a tour a possibility but it does remain an option even if that’s all it is at present. There’s strange irony in the fact that, having promised myself many times to retire from touring, the tour I most looked forward to undertaking was taken from me. This is what it means to surrender.

This page will continue to bring you news of projects both music related and otherwise. If the likelihood of a tour manifests itself this will be the place you’ll hear about it first but until then I continue to travel where my interests lead me. You’re always welcome to be a part of that journey, always, because without your participation the work, in whatever form it takes, ceases to be of value. Everything we produce at samadhisound has a back story of research into quality materials, design and, of course, content. But mercifully, nothing is mandatory, you choose your poison carefully.

My gratitude to all of you who’ve sent well wishes. I’m truly touched, as always, by your thoughtfulness.

And yet the world is full of love… (A glittering : sarah manguso)

A MESSAGE FROM DAVID

Firstly, I’d like to thank everyone for the kind thoughts, expressed here and elsewhere, for my wellbeing. It buoys my spirits to know that so much positive energy is being sent my way.

I’ve been talking over re-scheduling dates for my tour with those involved in the production. There was an opportunity to put some dates in place in October of this year but without the majority of the musicians involved in the original tour. On top of this, I felt concerned that my health might still be in some doubt at that point in time and therefore worried about a second cancellation, something that, we can all agree, might test the patience of everyone involved. I tend to think that, until that time arises, your money should be sitting in your bank accounts not someplace else. Consequently, I feel more comfortable cancelling plans for touring in the short term until I know I have the good health necessary to undertake another tour as is my intention. My sincerest apologies if you feel I’m letting you down and my even greater gratitude for your ongoing support.

Just as a brief news update: The independent publication of ‘Amplified Gesture’ is gearing up for release this Spring. The new edition includes an additional chapter by Phil Hopkins, an introduction by yours truly, and numerous outtakes from interviews with the artists featured in the film. The truly wonderful work of Katharina Grosse provides the art for the cover and Chris has done his usual beautiful job with packaging and design. We’re also in the process of putting together a release by Jan Bang and Erik Honoré based on my stint at the Punkt festival of last year. The work is built around my readings of poems, especially commissioned for the Uncommon Deities installation, by the celebrated Norwegian poets Paal-Helge Haugen and Nils Christian Moe-Repstad, along with samples taken from the numerous performances that littered that wonderful three day event. It also features contributions from two of my most favoured musicians; Arve Henriksen and Sidsel Endresen. Jan and Erik have produced a piece of real beauty. I couldn’t ask for better collaborators. Entitled ‘Uncommon Deities’, this project will be released in limited editions. More on this as the pieces fall into place.

In the meantime I wish you love, peace, and revolution.

According to some venue sites, new (unconfirmed) dates have been scheduled:

Further mentioned, but not confirmed:

This isn’t a message I’d anticipated writing. Unless memory fails me, I’ve managed to get this far in life without having to pull out from touring commitments entirely. I’ve had messages from everyone involved in the tour, all very generous and forgiving, willing me onto better health, which in my book goes to show just what a wonderful team of people we had in place. Oddly no news from the tour manager Danny White. Whilst he’s one of my favorite people to tour with he may now hold a permanent grudge. Too early to tell.

My sincere apologies (and gratitude) to all who purchased tickets for the shows.

It appears there were more of you out there than I’d anticipated. I’m undergoing tests and treatment and hope, all being well, to be able to announce a rescheduling of the tour within the coming months. If there’s an upside to this situation it’s that, with even more time to prepare, the tour will be all the stronger for it.

I do hope to see you out there ASAP. Until then .. love and gratitude

It is with great sadness that we announce that David Sylvian will be unable to undertake the scheduled tour in March and April 2012.

David has sustained a lower back injury that is causing him significant pain and affecting his mobility to such a degree that, at this time, he will be unable to perform.

We are hoping that with medical care his condition will improve siginificantly, and that we’ll be able to reschedule the tour at a later date. We’re doing all that we can to bring this unanticipated setback to a positive conclusion.

David will be writing a personal note that we will post online shortly.

In the meantime, should any of you wish to return your tickets for a refund, please contact the venues / agencies from whom you purchased your tic
kets. They’re currently being made aware of the situation.