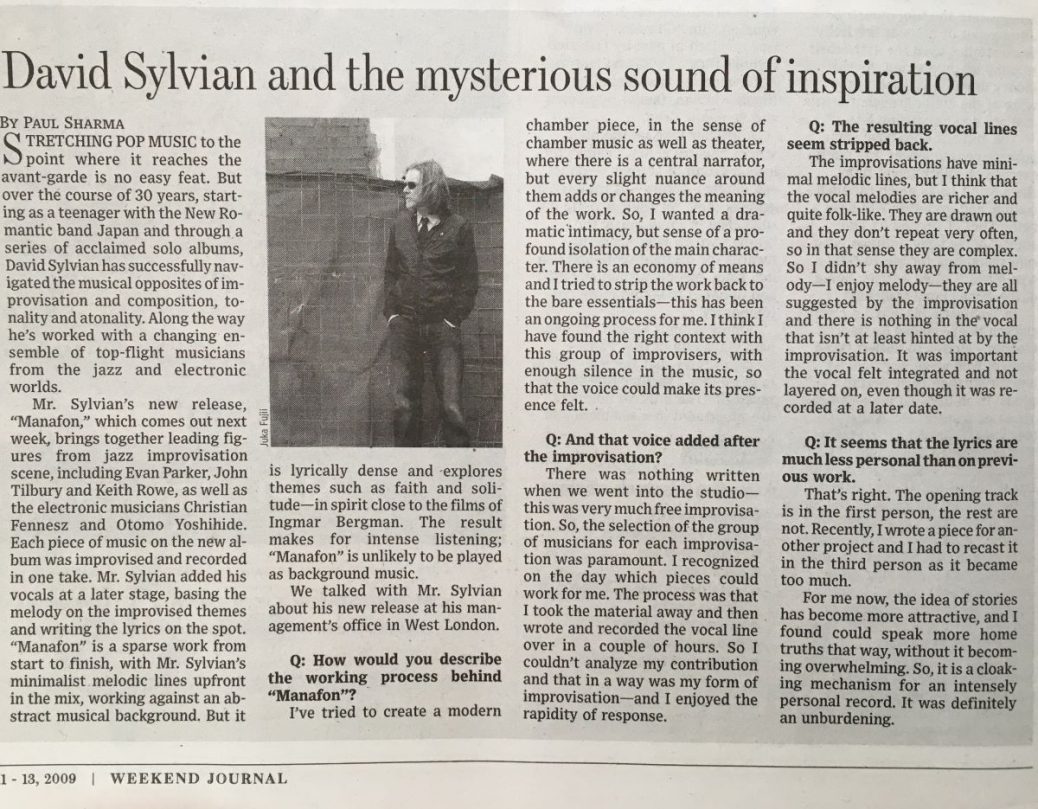 STRETCHING POP MUSIC to the point where it reaches the avant-garde is no easy feat. But over the course of 30 years, starting as a teenager with the New Romantic band Japan and through a series of acclaimed solo albums, David Sylvian has successfully navigated the musical opposites of improvisation and composition, tonality and atonality. Along the way he’s worked with a changing ensemble of top-flight musicians from the jazz and electronic worlds.

Mr. Sylvian’s new release, “Manafon,” which comes out next week, brings together leading figures from jazz improvisation scene, including Evan Parker, John Tilbury and Keith Rowe, as well as the electronic musicians Christian Fennesz and Otomo Yoshihide. Each piece of music on the new album was improvised and recorded in one take. Mr. Sylvian added his vocals at a later stage, basing the melody on the improvised themes and writing the lyrics on the spot. “Manafon” is a sparse work from start to finish, with Mr. Sylvian’s minimalist melodic lines upfront in the mix, working against an abstract musical background. But it is lyrically dense and explores themes such as faith and solitude—in spirit close to the films of Ingmar Bergman. The result makes for intense listening; “Manafon” is unlikely to be played as background music.
We talked with Mr. Sylvian about his new release at his management’s office in West London.

Q: How would you describe the working process behind “Manafon”?
I’ve tried to create a modern chamber piece, in the sense of chamber music as well as theater, where there is a central narrator, but every slight nuance around them adds or changes the meaning of the work. So, I wanted a dramatic intimacy, but sense of a profound isolation of the main character. There is an economy of means and I tried to strip the work back to the bare essentials—this has been an ongoing process for me. I think I have found the right context with this group of improvisers, with enough silence in the music, so that the voice could make its presence felt.

Q: And that voice added after the improvisation?
There was nothing written when we went into the studio— this was very much free improvisation. So, the selection of the group of musicians for each improvisation was paramount. I recognized on the day which pieces could work for me. The process was that I took the material away and then wrote and recorded the vocal line over in a couple of hours. So I couldn’t analyze my contribution and that in a way was my form of improvisation—and I enjoyed the rapidity of response.

Q: The resulting vocal seem stripped back.
The improvisations have minimal melodic lines, but I think that the vocal melodies are richer and quite folk-like. They are drawn out and they don’t repeat very often, so in that sense they are complex. So I didn’t shy away from melody—I enjoy melody—they are all suggested by the improvisation and there is nothing in the vocal that isn’t at least hinted at by the improvisation. It was important the vocal felt integrated and not layered on, even though it was recorded at a later date.

Q: It seems that the lyrics are much less personal than on previous work.
That’s right. The opening track is in the first person, the rest are not. Recently, I wrote a piece for another project and I had to recast it in the third person as it became too much.

For me now, the idea of stories has become more attractive, and I found could speak more home truths that way, without it becoming overwhelming. So, it is a cloaking mechanism for an intensely personal record. It was definitely an unburdening.