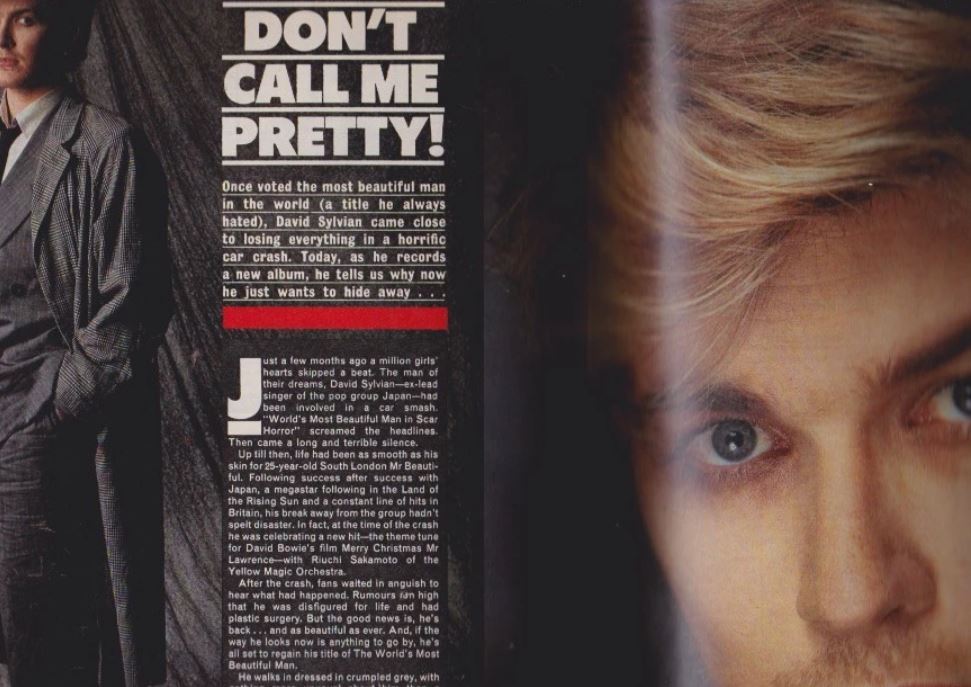 Once voted the most beautiful man in the world (a title he always hated), David Sylvian came close to losing everything in a horrific car crash. Today, as he records a new album, he tells us why now he just wants to hide away…

Jus a few months ago a million girls’ hearts skipped a beat. The man of their dreams, David Sylvian – ex-lead singer of the pop group Japan – had been involved in a scar smash. “World’s Most Beautiful Man in Scar Horror”, screamed the headlines. Then came a long and terrible silence.

Up until then life had been as smooth as his skin for 25-year-old South London Mr Beautiful. Following success after success with Japan, a megastar following in the Land of the Rising Sun and a constant line of hits in Britain, his break away from the group hadn’t spelt disaster. In fact, a the time of the crash he was celebrating a new hit – the theme tune for David Bowie’s film ‘Merry Christmas, Mr Lawrence’ – with Ryuichi Sakamoto of the Yellow Magic Orchestra.

After the crash, fans waited in anguish to hear what has happened. Rumours ran high that he was disfigured for life and had plastic surgery. But the good news is, he’s back…and as beautiful as ever. And, if the way he looks now is anything to go by, he’s all set to regain his title of The World’s Most Beautiful Man.

He walks in dressed in crumpled grey, with nothing more unusual about him than a single pierced ear. You’d hardly believe that he’s spent two hours having his makeup done.

From being a teen screen dream, with not much more than pin up power, he’s now looked on as a songwriter. His face is also a work of art! Though it’s now covered with a stubble beard. “It’s not there,” he’s at pains to point out, “to cover up extensive plastic surgery. I walked away from the crash with hardly a scratch. Unfortunately, I have the sort of pretty face that seems to attract attention.”

But, if David deserves any title, it’s surely the World’s Most Unlikely Pop Star. You’ll never spot him in ritzy nightclubs, trendy in-spots or flashy parties, a blonde starlet on his arm and a trail of hangers on. Most days you’ll find him at home in his stark little flat, sitting reading of just thinking. Or else in the recording studio where he’s carving a new career as a singer composer since Japan split a year ago.

“It’s all I really want to do. Life is just a process of learning. That’s why we are here, to build up inner strength by pushing ourselves to the limit. And it’s work that stretches you.”

Not the sort of statement you’d expect from the average teenybopper chart-topper. But David’s definitely different. Like his Eastern influenced music, he’s a bit mystical. “I’d like to come back to earth as a Buddhist monk.” He said. Not because he’s religious, he just fancies the life. He’s already had a crack at living like a monk. No emotional or material ties stand in the way of that kind of life. He doesn’t even own his own flat, despite the sort of five star income that could surely buy a luxury block, or two of them.

“Possessions and people just tie you down. Freedom is the great gift, and I use it to just take off whenever I feel like it. If I fancy a break in Paris or Japan, I can simply head for the airport there and then. There’s nothing to stop me.

“I really can’t cope with any of the rules ordinary people have to follow. I just can’t do things like washing the dishes or going to the supermarket. I can understand people who are terrified of open spaces, because I feel that way about going out in public sometimes. It’s impossible for me to open the front door, even walk up the street. The sight of that sea of faces! It depresses me. So I shut myself off from life for days on end. It’s the only way to survive.

“Okay, so people like me would have been locked away not so long ago, put under medical supervision. Even now, we’re looked on as loonies. Well, if being normal is going to work in a boring job from morning to night, five or six days a week, just to keep your body alive whilst your mind rots, then you can keep it. I don’t think that’s normal at all. I think it’s pure madness.

“I’ve earned enough never to fall into that trap. I’m rich enough to be tolerated as a loony. Others just get picked on. But remember it’s the world that’s out of its mind, not us.”

David’s had his fair share on being picked on. When he was a schoolboy in the mid 70’s, he chose to reject the bin liners, bondage trousers and spiky punk hair in favour of a rather tarty, made-up image. He got a severe thumping for it. “They don’t much appreciate art in Eltham,” he says with a wry smile. So instead, he, his brother and three schoolmates, stuck out the jeers, taunts and odd muggings, determined to make their way in music. In the age of the Sex Pistols, the Damned and the Clash, five boys in lipstick and panstick were not reckoned as a bunch to be taken seriously. The even picked the name Japan, and chose to launch themselves in their namesake country where, at the time, all you needed for a No.1 was a cute European face.

“The money we made from out Japanese success made sure we stuck together, following out own style of music, getting better and better. Without it, we would have gone down the drain long ago.”

They did outgrow their flamboyant image fairly soon though. But David hasn’t slung out his make-up bag and mirror altogether. The powder puff is still there, though it’s much more subtle these days. “I’m really not into make-up these days. I never wear it, unless maybe for a photo-session where my features would disappear under the lights without it.”
A word in the ear of the makeup girl later confirmed she was only permitted to touch up his foundation. He had insisted on painting his own eyes and lips.

“I don’t care about my appearance. Looks are unimportant. They are just a small part of the person who is behind them. And worse, they fool other people by telling them lies about you. To care about looks is stupid.”

Strong words, but the evidence is even stronger. There’s more that a hint of bleach bottle about his hair. And, even if his clothes haven’t seen an iron since they came off the catwalk, they’re a far cry from any second hand cast-offs.

“I only bleach my hair because I don’t like it’s natural mouse colour. And I wear loose, baggy clothes because I feel comfortable in them, not because they happen to be the height of fashion.” Would you believe he doesn’t even consider himself fanciable? “I dislike my body, it’s clumsy, it gets in the way.”

Lots of girls would love it to get in their way, but David doesn’t have much time for girls either. He once confessed to being bisexual. A revelation he’s regretted ever since. “You just have to speak about sex and suddenly you’re in all the papers.”

He does have a regular girlfriend but he prefers that they live apart. “I’m no good in close relationships. I need time alone to be myself. And sex is overrated anyway.”

The words of a world-weary rock star who’s seen it all? Not in this case. “I never went for the overdose of sex you get with groupies – even in the group’s heyday. It was there on offer, even the strict Japanese code of morality doesn’t apply when rock stars are around – but I managed to keep myself apart from all that. I’ve always had serious things to think about.”

It’s tough at the top, even for a beauty with brains.