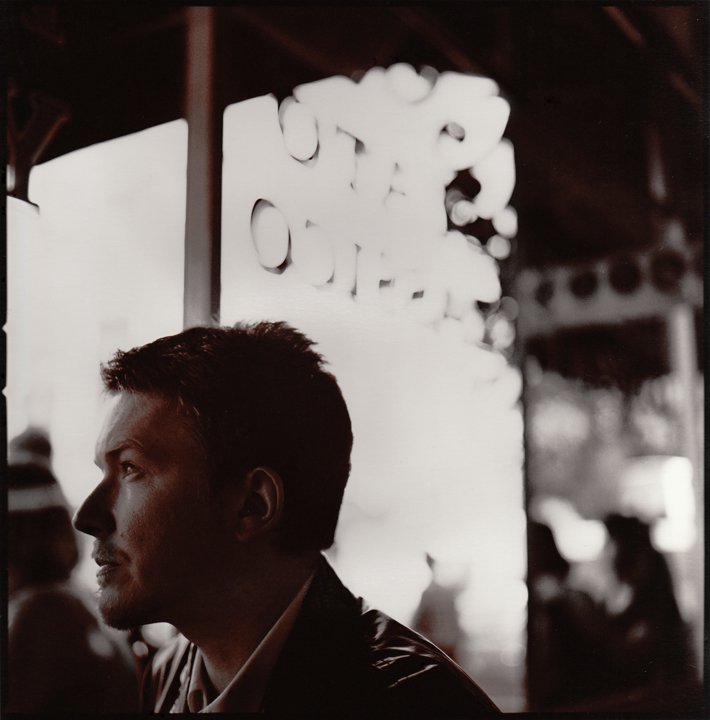 With thanks to Lenin Imports who first published this interview.

The interview with David Sylvian was conducted via e-mail through David’s management company, Opium (Arts) Ltd.. Many thanks to David’s Manager, Richard Chadwick, for arranging it. And, of course, thanks go to David himself for answering the questions.

Everything I know about the new album and all the contents of the interview are here. I know nothing else and having never met the great man it is not worth e-mailing or phoning with any supplementary questions you might have. Instead, feel free to post your comments on the interview on the David Sylvian Discussion Forum which is again up & running.

DEAD BEES ON A CAKE

QUESTION: Rumours of the flavour of the new album, DEAD BEES ON A CAKE, suggest a further exploration of the persuasive melancholy and the jazz influences of the first 3 vocal albums. Would this be fair comment?

DAVID SYLVIAN: I wouldn’t necessarily choose those words to describe my solo output but, yes, the new album does speak in what might be described as a familiar voice.

Q: How would you say the album compared to THE FIRST DAY? Do you feel you have explored to the full the more aggressive elements that made up THE FIRST DAY?

DS: The First Day served it’s purpose. At that time the only option to producing music of that kind would’ve been to maintain silence which in hindsight might’ve been a better option.

There’s often been a harder edge to certain aspects of my work and that continues to be the case.

Q: On the EP, DARSHAN, you had THE GRID & FUTURE SOUND OF LONDON radically remix the track. Will there be such a radical approach to any of the tracks on this album?

DS: Darshan did lend itself to radical re interpretation however, it’s a relatively rare occasion when I feel comfortable handing over material to third parties for remixing. I can think of two pieces on the new album which could take multiple interpretations so the possibility for remixes does exit.

Q: It is intriguing to know having lived in the US for 4 years or so how this has influenced the album. On your previous solo albums you seem to have been influenced by European writers (Cocteau, Radiguet, Kundera, Sartre to name some). Has the past influences given way to new ones? And will the album have a more American feel to it?

Listeners have commented on a blues and r & b element in the work but the material is clearly related to my previous solo work in many respects.

Q: What influences have the teachings of Sri Sri Mata Amritanandamayi brought to the album?

DS: Amma is my teacher. Her presence can be felt throughout the album in one form or another. I think it would be fair to say that if there is a theme to the album it could be described as one of devotion. The songs celebrate life in all its complexity.

Q: Are there plans to tour with the release of the album? And have any dates or personnel been chosen at this date?

DS: Plans are underway for a tour in the Spring. No personnel have be chosen at this time.

Q: I SURRENDER has been officially announced as the first single. What kind of signpost would you say it was for the rest of the album?

DS: I believe ‘I Surrender’ makes a clear enough statement as to indicate where my priorities lie which should give some idea as to the content and themes running throughout the remainder of the album.

Q: RUSSELL MILLS has been commissioned to do the artwork for the new album. Russell seems to capture the landscape of your music so faithfully and it does aid the listener in creating a visual sense of your work. How does the procedure between Russell & yourself work?

DS: Actually Russell is designing the album cover. Shinya Fujiwara supplied the artwork. I first worked with Shinya on the Rain Tree Crow cover. Although known primarily as a photographer in the west he is also an essayist, novelist and artist. The artwork is a lithograph created specifically for the album.

Russell, Yuka Fujii and I work very closely on the design. Yuka and I generally supply the initial ideas and approach which we then expand upon together with Russell.

Q: You are known to be a perfectionist in the studio. Was there any specific reason for the time between THE FIRST DAY & DEAD BEES ON A CAKE? I mean, there have been rumours of release dates for the last 18 months or so. Did your intentions for recording the album change during the length of time it took and if so did they affect the release date?

DS: No, my intentions never changed. The short answer to this question is that my life became increasingly more interesting with strange turns of events drawing me away from the work for periods at a time.

Q: How has parenthood affected your songwriting? Has your sense of self changed because of it?

DS: In all close relationships we have the potential to learn a lot about ourselves, see our shortcomings more clearly, make amendments etc. With children you get that same experience intensified coupled with an unconditional love that is immensely rewarding and enriching. I’m not certain that these experiences have affected my writing in a perceptible way although I believe the work embraces those relationships being born out of the environment that contains them.

Q: Do you still enjoy the struggles of creating music. Are there times you feel like walking away from it all?

DS: There’s no doubt about it I do enjoy creating music but there have been times when I’ve wanted to walk away from it for a number of reasons. Numerous problems arose in the recording process that undermined my best efforts to see it completed. Occasionally I doubted it was possible. Plus throughout the 3 year period it took to complete the album major events in my life took place shifting my focus away from the work for months at a time.

Q: Would you say DEAD BEES ON A CAKE is a positive album. Are you happy with it? Does it reflect your present state of mind faithfully?

DS: I would say it’s a celebratory album. It celebrates life. It does reflect my present state of mind in all it’s complexity.

Q: Is there any release date for INGRID CHAVEZ’s 2nd solo album?

DS: Although Ingrid and I have worked on a fair amount of material together neither of us felt the time was right to start recording an album in earnest. The focus on our family has been a priority for the past 5 years. We’d both love to get to work on new material at the first opportunity with a view to producing Ingrid’s next release.

Q: How do you feel about the ‘God like’ aura you have for some fans? Is it something you feel comfortable with?

Q: You seem not to like defining your work or your beliefs. Why is this? Would it be fair to say that you would rather the listener find their own answers in your work rather than you pointing them out?

DS: I don’t feel any need to define the work. As for my beliefs I don’t feel it necessary to broadcast them as it would not be of any benefit for people attempting to make a personal connection with the work. The work really only takes on a life of its own when individuals relate the work to their own lives.

Q: Your management company, OPIUM (ARTS) LTD., has always been renowned for the quality of its releases (PERSPECTIVES, TROPHIES etc) and for the calibre of the artists it represents (YUKA FUJII’s stunning photographic work, BILL NELSON, ROBERT FRIPP, MICHAEL BROOK, JOHN PAUL JONES). What were you reasons for setting it up and if there is a mission statement for OPIUM what is it?

DS: I started the company with my manager Richard Chadwick and Yuka Fujii around ’85. It was an attempt to retain control of the quality of the work produced under my name. Since leaving the UK in ’92 I’m no longer directly involved with the company as a director although it continues to serve the same purpose for me and my work. Richard maintains the same approach with all the artists represented by Opium.

Q: TROPHIES is set for re release at the same time as the album. Will it be any different from the original release?

DS: Trophies II continues where the last left off bringing us up to the present day.

Q: Have you any plans to use artistic mediums other than music in the near future? Did you not want to further explore the themes started with PERSPECTIVES or did you feel that you had taken them as far as you could?

DS: I’ve enjoyed working on the installations ’ember glance’ and ‘ Redemption’. That’s an area which continues to excite me.

Q: Running both JEAN COCTEAU & ANGUS MCBEAN pages I would be interested to know how you got into their work and why they influenced you.

DS: I got into Cocteau’s work via his films. For a period of time I found his work very inspirational, liberating and…..well he became something of a companion to me as odd as that might sound. I enjoyed his company immensely. The ease with which he moved across boundaries and disciplines creating his own hermetically sealed world despite his high public profile fascinated me. His poetry still strikes me as being underrated in the english speaking world.

The photographer Anton Corbijn introduced me to Angus’ work when proposing ideas for the ‘Red Guitar’ video. In all honesty as much as I liked Angus’ work and loved the man he had a greater influence on Anton’s work than my own.

Q: Have you read the new biography? Were you happy with its portrayal of you?

DS: I’m not aware of the book.

Thank you for the questions.

Many thanks to Paul of Lenin Imports for giving permission to republish this Q&A.