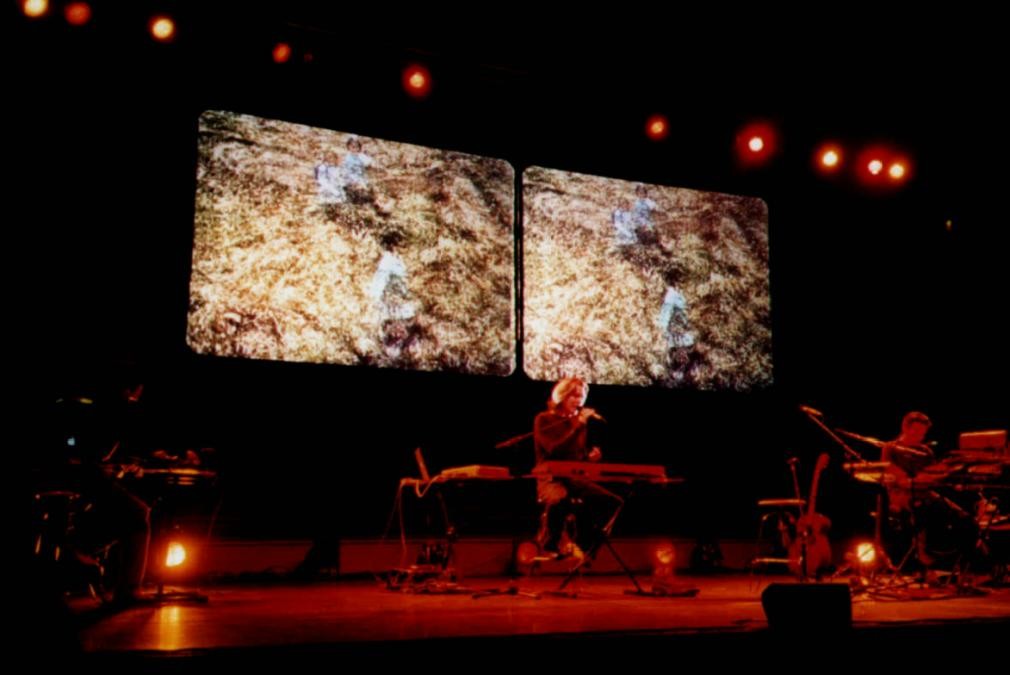 Interview related to David’s concerts in Japan, April 2004.
DAVID SYLVIAN
A spiritual journey that begins within

By KEN KAWASHIMA
Special to The Japan Times, 18 April 2004 (page has been removed)

What is the sound of the universe? What does one hear? These are questions that crossed David Sylvian’s mind prior to the making of his most recent album “Blemish,” the debut release of his Samadhi Sound label last year. Talking over the phone from London last week, the singer/songwriter and frontman for the ’80s new-wave outfit Japan, says he was seeking for a sound that would describe Samadhi — a Sanskrit term meaning “unification with the divine.”
“Obviously, it’s entirely conceptual and impossible to answer,” says Sylvian, 46. “So there are no doctrines, no concepts, no parameters — it’s whatever works, basically. I wanted the label to have that freedom of approach.”

Sylvian, who is currently touring Russia with his brother, Japan band-mate and drummer Steve Jansen, will soon bring his spiritual and sonic sensibilities to Tokyo for shows at Hitomi Memorial Hall on Friday and Saturday, before heading to Nagoya and Osaka next week. The “Fire in a Forest Tour ’04” will feature the brothers employing samplers, synthesizers and laptops for the opening “Blemish” portion, followed by a semiacoustic set focusing on his older material.

Very few of Sylvian’s contemporaries from the postpunk ’80s set have sought out new and alternative styles of musical expression as consistently as this artist has. Japan’s later singles, like the Sino-flavored ballad “Ghosts” (1981), which peaked at No. 5 in Britain, demonstrated the marketability of his more experimental work, while the group’s other top 10 hits like their faithful rendering of Smokey Robinson and the Miracles’ “I Second That Emotion” in ’82, proved his ability to lend a distinct voice to the late ’60s Motown hit: It also showed he had soul.

By the time of his 1984 solo debut, “Brilliant Trees,” a work that wedded haunting lyrics with ambient jazz, and entered the U.K. album charts at No. 4, Sylvian had ditched the pancake makeup and completed the transformation from pop icon to serious sonic stylist. Bolstering this new image were guest appearances by an international roster of artists such as Ryuichi Sakamoto, Kenny Wheeler and Holger Czukay. These same names would later reappear in Sylvian’s solo albums, including his final work for the Virgin label, “Dead Bees on a Cake” (1997), which showcased raga-tabla percussionist Talvin Singh.

Now Sylvian, who’s back from a seven-year hiatus with the release of “Blemish,” has freed himself from his 20-year corporate ties with Virgin, and is once again reaffirming his status as one of the experimental genre’s enduring stars. As the album’s title suggests, “Blemish” reveals the artist unmasked, emotional scars and all, and marks his most compelling transformation to date. With often no more than a minimalistic, mesmerizing drone in the background, his vocals are surprisingly loud, upfront and direct. “Breathing into the microphone, I feel like I’m almost breathing into the listener’s ear,” says Sylvian, about the recording, which he engineered and mixed alone using Pro Tools software. “As I turned the speakers up in the living room, I felt the vocals almost had a physical presence, which I felt was very interesting because the vocal is basically confessional — it’s talking about subject matter that is very private, very personal and painful.

“Then I thought, if you’re confronted by this physicality the voice has, there’s no shirking from the emotional impact of what this person is talking about.”

In order to maximize the emotional immediacy of his songs, Sylvian recorded most of his vocals and synthesizers directly onto hard drive in a single take, and edited the digital sounds with an equally low-tech approach. On “The Only Daughter,” for example, he dubbed the original vocal track onto CD and fast-forwarded the verses, to create a schizophrenic stuttering effect that mimics the conflicting mind-states of a heartbroken man. While the vocal-guitar collaboration on “The Good Son” was digitally conceived by musicians in two different places (free-jazz guitarist Derek Bailey in London; Sylvian in the States), the result sounds organic, as if it were recorded live. Sound files of Bailey’s guitar were sent to Sylvian, who would then listen a few times, no more than five or so, and instantly overdub the recording with a verse response.

“It was the closest I could come to a form of improvisation as a lyricist or a vocalist,” he says. “It’s like you’re right in the process, the ink is still wet on the paper, and the rest is like ‘OK, have faith, see where it leads you’ — there’s a beauty to that.”

It seems to be a pleasing thought for the artist whose ability to go with the flow of music, in many ways, reflects his own personal growth as a human being. Sylvian, who has studied and practiced various Eastern religions over the past few years, admits that his daily rituals of meditation have not only allowed him to attain a more heightened sense of being at the moment, but an awareness of his (and our) own connection with the divine.

Even the focus of his latest discipline, a Hindu-based form of ritual worship called Puja, he says, is “to recognize oneself as a divine being.” Or maybe after all the musical mileage he got from playing out a world’s worth of musical styles, the artist is simply getting ready to channel into the most vital source of inspiration there is: his life. The New England studio/hom where Sylvian lives with his American wife, the singer Ingrid Chavez, and two daughters, and where Samadhi Sound is based, was once run as an ashram.

So what is the sound of Samadhi?

Does Sylvian ever fear that a totally enlightened state, devoid of ego, may only result in empty-sounding music?

“It crossed my mind,” he says, but after a slight pause, he adds: “I thought it was worth the sacrifice. If I was to reach a point of growth where the ego was shed to such a degree that music was not such a vital part of what one is, because something else has taken its place — then that would be an evolution that I could live with.”