Japanese release for the David Sylvian exhibition Glowing Enigma’s from April 20th to May 20th 2012 in the Impossible Project Space Tokyo, Japan.
Book is Japanese oriented and reads from right to left.
Great design: some pages are fold-outs and others not. Each page contains one reproduction of a polaroid.

Forword by David in the book (and at the entrace of the exhibition):

Although I’d started taking polaroid photographs in my early twenties, I hadn’t returned to the SX-70 camera since I’d retired it in the early 90’s.
From the decade on I’ve worked exclusively with digital cameras and my eye has adjusted accordingly. Working with the limitations and benefits of the LCD screens on digital cameras I became far more conscious of colour and form, of making compositional choises based primarily upon this criteria. When the focus of attention moves from the audible to the visual, and this has to be a fairly conscious decision, the educated eye registers these elements prior to conscious thoughts intervention so the process has become largely instinctual. I rarely photograph people.
Most of images are now devoid of the living. Our presence is alluded to via the manmade environments I’m largely drawn to, the detritus of our modern lives, evidence of social organisation and cohabitation, vehicles, architecture, possessions and, inevitably, the natural world.

Returning to the polaroid camera with its insistence on being held close to the retina, the world was again dimished. In my opinion this instrument was never at its best attempting to capture the broader view, it was all about the details so, once again, I found myself drawn to the minutia of the world  round me and, yes, portraiture. The quality of the new film stock is such that one has to embrace its faults: the seemingly random over and under exposed images, the developmental errors. These give the images the look of something long lost, redeemed from memory, another time and place. They imbue the ordinary with the melancholy of the departed, the luminosity of the lost. Suspended in a limbo in and outside of time, divorced from context, these photographs exhibit some of the ‘glowing enigmas’ that inhabit the world.

Glowing Enigmas, or the Art of Imperfection 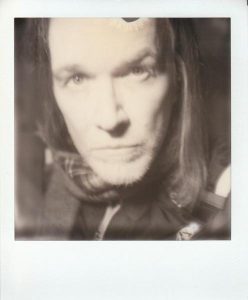 As a musician, David Sylvian has certainly been around the block a few times: he can now look back on a 30 year solo career, and that is not counting his time as a frontman for the group Japan. Besides music, Sylvian has worked in a series of art forms: be it installations, video works (1985’s Steel Cathedrals), and photography. In 1984, he published a book entitled “Perspectives” which featured his then recent Polaroid works – or rather, collages made from Polaroids. Over the years he kept posting photos of his on his web site – having gone digital, he snapped everyday objects and scenery, quiet reflections on his life and environment. In April of this year, Sylvian returned to Polaroids. In cooperation with the Impossible Project (the project which brought Polaroid photography back to life after the demise of the company Polaroid), he exhibited his new work in a gallery in Tokyo, in a show which was entitled Glowing Enigmas.

I have not seen the show, but I recently acquired the catalog for the exhibition from the Impossible Project web site. Glowing Enigmas presents itself much like Sylvian’s recent music: brooding, experimental, a celebration of imperfection which at the same time opens the senses to the beauty at the core of this imperfection. Of the 55 photos represented here, there are a few self portraits, a couple of portraits of other people, a few nature shots; but the heart of the collection is the representation of small objects – statuettes, photographs, bottles, flowers&nbsp; etc. – which give the collection a very intimate, even personal feel. Most images (both in black and white and in colour) use darker tones, low light and are often out of focus, giving the everyday objects a sense of the magical and mysterious, i.e. enigmatic. Many photos play with light: light falling through glass, shadow plays, reflections on surfaces etc., enhancing the magic quality of the images and underlining the artistic approach to the taking of the photographs.

David Sylvian, in the accompanying text, summarizes the collection thus: 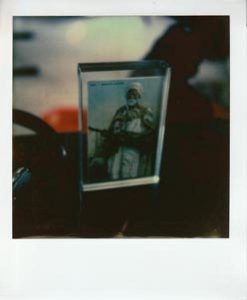 “I rarely photograph people. Most of my images are now devoid of the living. Our presence is alluded to via the manmade environments I’m largely drawn to, the detritus of our modern lives, evidence of social organisations and cohabitation, vehicles, architecture, possessions, and inevitably, the natural world.”

Of course, the style&nbsp; of the polaroids also reflects where the Impossible Project is at today: the film stock which the company produces are still at an imperfect stage – the colours are far from what the original Polaroids used to be, are slow to develop and prone to light leaks and other discolorations. This is disturbing to many (read the reviews for the films on Amazon, and you get the picture), but some, like Sylvian, embrace this imperfection. To the films’ inherent quirks, he even adds other imperfections: many of the photos show tearing, although whether this is by design or by accident, I don’t know. As Sylvian puts it, these imperfections give the images “the look of something long lost, redeemed from memory, another time and place. They imbue the ordinary with the melancholy of the departed.”

The book itself is printed on heavy white paper and comes in an unusual slim format. It presents the 55 photos in its original size. Some pages are fold-outs, when opened, they present triptychs of related images.

So in short, Glowing Enigmas reflects an artistÂs very personal yet enigmatic look at his world though a collection of unique, original and artistic photographs.