35 YEARS AGO THIS MONTH… (by Simon Napier Bell) 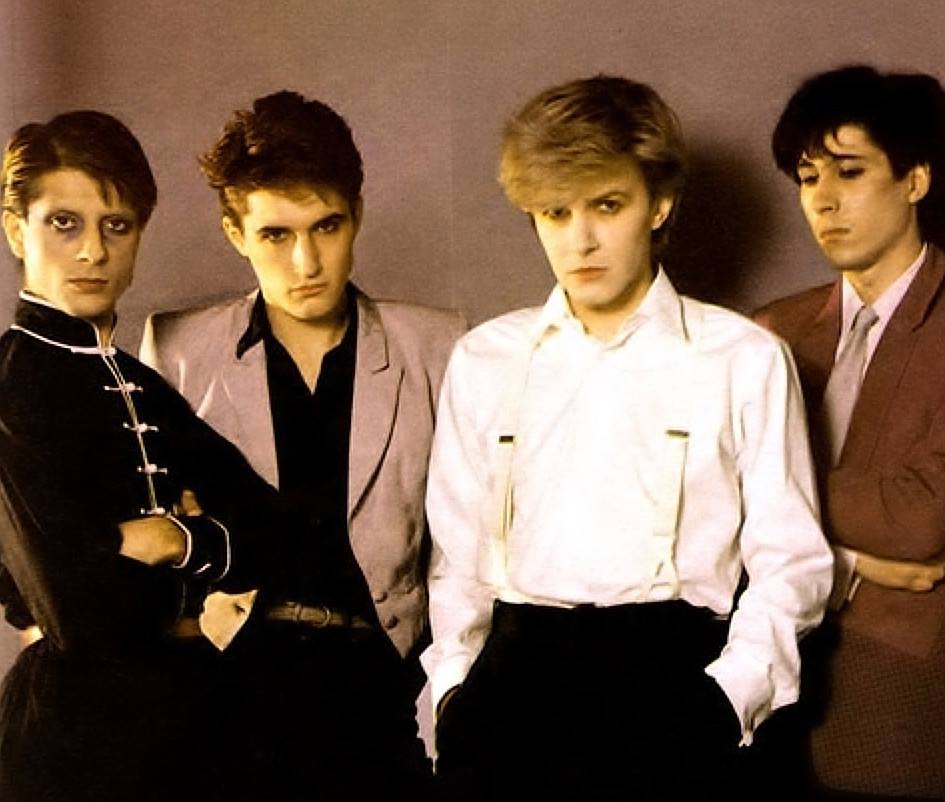 Japan were in the middle of their last tour. At the end of it they would break up, which seemed insane. It had taken six years for them to move from being unknowns to Britain’s most influential rock group.

I’d signed them in 1976 after I’d auditioned David Batt at Wigmore Hall Studios. He turned up in hippy sandals and jeans with long blonde hair down to his waist and an acoustic guitar slung over his shoulder. In the studio he eyed me disdainfully, as if he were doing the auditioning, not me. It wasn’t just his looks that won me over, it was his voice and his rambling songs with their strange lyrics, “She keeps her love in a carrier bag”.

With him came a group. On drums was Dave’s brother, Steve, only 16 and a dead ringer for young Elvis. The bass player was “Mick” Michaelides, their best friend, with down-to-the-waist hair to match David’s, but orange. On keyboards was Richard Barbieri, thicker-set and more cautious than the other three, but like the others from the same school in Lewisham. And on guitar was Rob Dean, from North London, acquired through an ad in Melody Maker.

I put the group into a recording studio, got some examples of their best songs, then sent them off to a photo session. When I had the perfect picture I put together a smart-looking package and sent it to every A&R man in London. It wasn’t the first time my enthusiasm had blinded me to the realities of the music business. In the 60s I’d got much the same reaction when I first sent out tapes of Marc Bolan. I should have remembered that A&R men immediately turn down anything that doesn’t sound exactly like the current best-selling artist. They have no understanding of being prepared for the next change in style or the next development.

Among the stack of depressing rejection letters were two which stood out. One was from someone at RCA: ‘If you change the group’s bass-player and find someone who knows how to play, I might be prepared to listen again’. The other was from an A&R man at CBS. “This group has potential. Unfortunately, we are not in the potential business.” (Presumably the reason for them hiring an A&R man who had none.)

It was a bad start but I persevered more than I’d ever persevered before. David changed his surname to Sylvian, his brother to Jansen, and Mick to Karn. It took a year to get a record deal, two years to get their first record released, three years to play the first UK gig that broke even, four years to be taken seriously.

But after five years Japan were one of the most influential groups in Britain. David’s new bouffant hairstyle had been stolen by Duran Duran. The sound of Mick’s fretless bass had become the backbone of Paul Young’s hits. Richard’s flowing synth lines were heard in every emerging group. As were Steve’s drum syncopations. And when their new album Tin Drum came out it was the successes of the year, setting them up to break America.

Mick had a Japanese girlfriend to whom he was devoted – he was learning Japanese and had settled down domestically. But one day he came home to find she’d left him for David. The group came to me and said they were breaking up. It was apparent there was no point trying to persuade them otherwise, but I told them, “For the sake of your future solo careers, don’t announce it yet. That way you’ll continue to have the status of being part of a top group while you each sort out what you want to do with yourselves. Meanwhile I’ll tell the press Japan are working on their next album.”

During that year we released three Japan singles, all of them big hits – Ghosts, Cantonese Boy, and I Second that Emotion. I was playing for time and I hoped to keep them together. After three months I persuaded them to play a final tour starting in a further four months time. When the tickets were put on sale they sold out at once. It was a long wait, but on the first night I held my breath – going on tour again, being onstage, receiving rapturous applause – surely it would bring them back together again.

But the answer was “No!”

On the first night, billing and cooing in the dressing-room with David, was Mick’s ex-girlfriend. Mick refused to go in. And from there on it was inevitable.

After a British finale of six consecutive nights at Hammersmith Odeon, the group went on to Hong Kong, Thailand and Japan. Even till the last day I thought, “This band just CANNOT be breaking up.” But after the last gig in Nagoya, they did.

Inconceivable really that they could play so tightly, appear so cohesive, yet still walk off stage and separate, just like that. I felt there had to be more to it than just the domestic relocation of Mick’s girlfriend, and in due course I realised there was.

Maybe one day I should write the book.