Review published: December 24, 2007 at All About Jazz
by Nenad Georgievski

Horizons unfolded anew at the Dom Sindikata venue on this Monday, adding another chapter to a series of concerts that is every music fan’s dream come true. The Dom Sindikata venue is the perfect place for an intimate concert for a larger audience. I have already had an opportunity to experience here memorable concerts by Laurie Anderson (as part of the BELEF festival in honour of Nikola Tesla) as well as the best acts at the 2006 Belgrade Jazz FestivalÂJohn Scofield Trio and Soweto Kinch. And on this blustery October evening, British singer David Sylvian created a musical storm in the hearts of his fans. 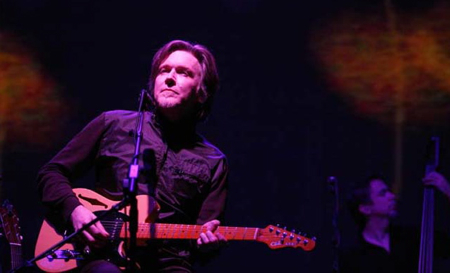 From the outset, Sylvian did more than make an entrance: he entranced the audence, then proceeded to hold them captive for the next hour and a half. It was an eagerly awaited performance that proved to be worth the wait. Sylvian’s opening the concert with the song from the Nine Horses project, “Wonderful World,” allowed the band to show their strengths from the very start. Backed by Takuma Watanabe’s in-the-pocket pianisms, Jansen’s articulate drumwork and Lowe’s intelligent basslines, Sylvian bared his wounded and wonderful musical soul to an engaged and enthralled audience, and with every new second, the music became more and more engaging.

Lowe and Jansen locked up the groove as if swinging were the same as breathing, allowing Watanabe and saxophonist Theo Travisto to engage the singer in a continual dialogue. Sylvian responded with vocal stylings that were beautiful and contemplative, intoned by a voice that became even more magical when shared with the exquisite accompaniment of this band.

The set was varied, featuring tunes recorded at various stages of his illustrious career, starting from Japan’s “Ghosts,” which was performed as a medley with “Fire in the Forest”; familiar material from the 80’s; next, the Rain Tree Crow project and the work with Robert Fripp; finally, rarities such as “Ride” (leftover from the Secrets of the Beehive sessions that saw also the light of the day on the Everything and Nothing collection), “World Citizen” (the single with Ryichi Sakamoto) and “Sugar Fuel” (with Readymade).

The group shifted seamlessly between romantic elegance and quiet storm, and this movement charged their performance, igniting the embers of their creative fire. Sylvian has mastered the rare art of creating a sound unmistakably his own, his trademarks wide-arching melodious compositions that are hymnical, serious and lovely, yet introspective. The soundscapes are simple yet convincing and ultimately amazingly complex. Listening to this music performed live, one is fascinated over and over again at how intense and up-lifting the energy is that he radiates. Such is the arresting beauty of Sylvian’s sound that it comes as no surprise that his music has captured a significant and faithful following. 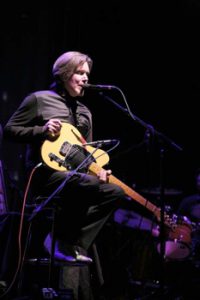 Though Sylvian was naturally at the center, it was Jansen’s drumming that proved to be the backbone of the band. He is a brilliant percussionist, very sensitive and accurate, imbuing the music with its quiet fire. Adding to this magical mix with an uncanny ability to spin complex structures and create intensity, pianist Watanabe laid down the basic themes of the group and sent them off on their transporting voyage. On the other hand, though saxophonist Travisto could be heard, his presence was purely decorative and unnecessary. To be honest, it wouldn’t have made any difference to the overall feel if he weren’t in the band.

The performance of tracks from Nine Horses took a different shape from the recording: it was a treat to see them transformed from studio-created gems into living and breathing music. Songs such as “Snow Borne Sorrow,” “The Librarian,” and “The Day the Earth Stole Heaven,” especially, took on a life of their own. The musicians’ interplay and playfulness saw them embarking on a common quest for the communicative momentÂthat special instant of discovery that will leave an indelible mark in the audience’s memory. A felicitous addition to the repertoire was the gentle “Playground Martyrs,” from Jansen’s album Slope.

Compositions such as “Brilliant Trees,” “Before the Bullfight,” “Mother and Child,” and “Weathered Wall” showed where Sylvian’s soul lies. It would seem absurd to discard these songs (or any from Sylvian’s past) for future tours when they have formed the backbone of his musical persona. But, if this was the last time they are to be heard, it was a fitting adieu.

The enthralled crowd would no doubt have liked to hold musicians as hostages for another entire set, as they were screaming for more, showing no intention of calling it a night. However, the night ended with two encoresÂthe performance of a Rain Tree Crow track, “Every Color You Are/Riverman,” followed by “Wanderlust.”