Home Articles and Interviews Transcripts The Roar Of The Drone (Stomp and Stammer, May 1999) 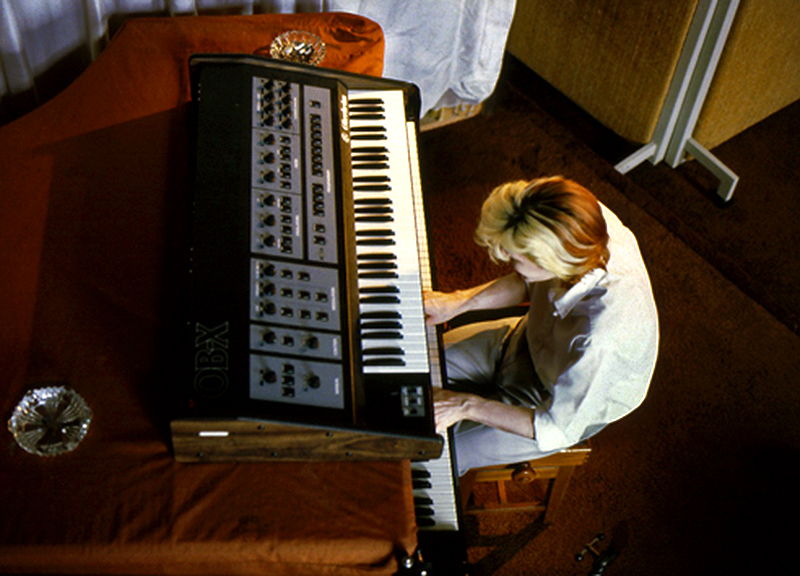 The Roar Of The Drone by Jon Kincaid (Stomp and Stammer, May 1999)

Most people have never heard of David Sylvian, which is quite unfortunate. In a world where the Offspring can score a number one single, David Sylvian makes music that could be popular but has one distinct disadvantage -his songs are actually interesting.
David Sylvian’s saga could have turned out different. In the mid-1970s he formed the band Japan with his brother Steve and schoolfriends Mick Karn, Richard Barbieri, and Rob Dean. While the band began as a weak New York Dolls glam imitation, Japan eventually evolved into a futuristic vision of what would become the New Romantic movement. In the early ’80s, the band reached its commercial peak, scaling the charts in most of the world. Rife with internal tensions, the band chose to call it a day in the fall of 1982. Had the band continued on, Japan might have attained the heights in the United States of a band that borrowed liberally from them in both sound and appearance, Duran Duran. While some would look back at their commercial peak ,with a nostalgic nod, David Sylvian views the experience as the first steps to where he is today.
“I haven’t listened to the work since I completed it around ’81 or ’82 at the latest,” he admits. “For me, that period was a wonderful time with which to learn, from our failures as well as our successes, and it also helped me a lot to learn how to write and arrange and perform. It helped me to try to understand what I was trying to focus on as a writer, on what my goals should be, though I don’t think I came to grips with that until the band was on its last legs, when I wrote ‘Ghosts.’
“I really draw a very clear line with the music I made with Japan and everything I’ve done since,” he continues. “I can stand by everything I’ve done since ’83. Everything before that was born out of a different set of circumstances and I find iit hard to relate to that material now.”

While David Sylvian tends to have a fairly hard-core fanbase ( a la Kate Bush), he says that although he truly appreciates the interest, he doesn’t want to invest in it himself, finding it “unnatural” to have devotion heaped upon him in the press or on the internet. Instead, Sylvian’s fans might get to engage in a more personal show of affection, as David may tour in early 2000. In the past (all the way back to Japan) , Sylvian disliked the touring aspect of the industry. This changed a few years ago when he toured the world with Robert Fripp.
“Working with Robert Fripp, that kind of opened my eyes to the pleasures of live performance. It still takes a back seat to writing and recording which is an area of work I truly enjoy. Nevertheless, I have grown to enjoy that aspect of my work more and more since working with Robert. I think I was influenced by the degree of focus, commitment, and concentration that Robert brought to the stage night after night. I’m actually looking forward to touring after completing work on producing and co-writing an album for my wife and putting together a compilation album that Virgin have been asking for a number of years that would create something of an overview from, let’s say ’82 up until the present time, incorporating the solo work, the collaborative work, and the work I’ve done for others over the years. The tour could become a platform for Dead Bees, for the album that I make with Ingrid, and something of a retrospective tour. And that would be quite exciting to undertake,”
With so much in the planning stages, the future appears to be bright for David Sylvian. New music, his family, a possible tour, yes the year 2000 looks… uh oh. The year 2000. The Millennium. Knowing of David’s investigations into the various aspects of faith and spirituality, perhaps he has some insight on what we can expect…
“I tend to have the same viewpoint as I’ve heard the Dalai Lama express, that it’s just another day,” he says. “If you’re not changing internally, if you’re not developing yourself, then nothing’s going to change externally. Until that begins to happen, nothing major is going to change.”

1999, Stomp and Stammer.
Many thanks to Sheila O’Shea for providing the magazine.