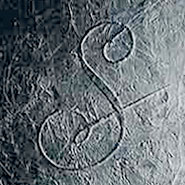 Actually it’s a Robert Fripp track on version 2 of the Jean The Birdman CD-single.

David Sylvian got his ‘solo’ track on the single (Tallow Moon), this one is for Robert.