This Brilliant Career (Melody Maker, May 1984) 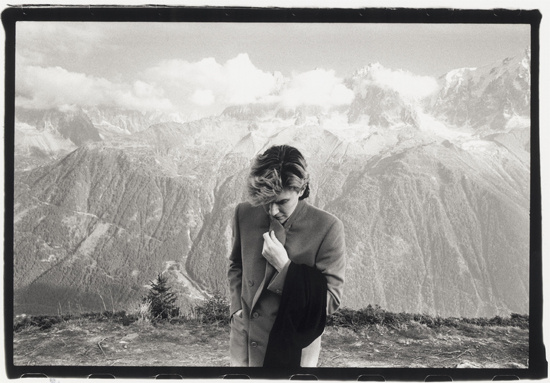 This brilliant carreer by Steve Sutherland

Once described as “the most beautiful man in pop”, DAVID SYLVIAN steps out of the shadows this week with the release of a new single, “Red Guitar”. In his first major interview since Japan split, he talks to Steve Sutherland about Picasso, paranoia, the art of improvisation and his forthcoming album, “Brilliant Trees”.
Offered the choice he sat by the window, haloed in light, warmed by the sun. I sat in shadow. Strange, I thought, that we should be this way round.
At last. I’ve wanted to talk to you for ages.
“Yes, I know. I just hope I don’t disappoint you.”
Oh, but then he sipped ice-cold milk, smoked French cigarettes and wore shades; David Sylvian’s emergence is suitably gradual as befits a contented recluse.
I’ve been chasing him for nigh-on two years, religiously ringing Virgin every fortnight to be told “David’s here, David’s there, we don’t know where David is”, or “David doesn’t feel he’s got anything to talk about at the moment” so often it has become something of a standing joke.
Since Japan split, he scarcely broke cover. There was a snippet in The Sunday Times Magazine significantly out of sequence with his cautious manoeuvres, a retrospectively tilted interrogation in Blitz with a photograph to substantiate the rumour that he was hiding himself in a stubbly beard – barely anything else.
And then suddenly there’s a new single, a new album and then this tte–tte at the Portobello Hotel. He’s clean-shaven again and I’m bristling with theories so you’ll forgive me if I begin with a grand contradiction, a preconception I’ve faithfully nurtured concerning the mightly impulses that coax David Sylvian’s tiny responses. Like one of those natives fighting shy of the camera for fear that a photo will diminish his soul, David Sylvian appears petrified of emotion; creating art, building structures, seeking discipline, doing anything to avoid revealing himself.
He listens attentively, smiles and nods his approval.
And yet there’s a horror there too, an unspoken suspicion that the precious self must be sought and extinguished to make manifest any truth. And what if, when all the external influences and irritations are peeled away, that essential self turns out to be nothing but a void acted on by its environment, an “Apocalypse Now” of the soul, guilty of any mad misdemeanour in the right or wrong circumstances? Does that make sense?
“Yes, it does, it does! It’s a good observation. It’s something I wasn’t consciously aware of, something that I must have pushed to the back of my mind. You have to hope that it’s not true, otherwise it makes everything you’re doing totally invalid.”
Japan were doubt disguised as confidence, a beautiful symmetry frail as an eggshell. They are no more, but I suspect David Sylvian is still working because he wants to convince himself there’s a point to life. Everything must be important.
He acquiesces again: “Uh huh. You’re one of the first people I’ve spoken to about the new album so your questions are making me think about the songs a little more than I would do. I’m too close to think about them really so anything I say now will probably be a very shallow interpretation of what the songs are about. That’s not to say they’re invalid, just close.”
David Sylvian’s new album is called “Brilliant Trees” (out sometime in June) and features an inspirational array of talent including the eccentric German Holger Czukay, jazz trumpeter John Hassell, David’s brother Steve Jansen and Richard Barbieri from Japan, and a core of New York funk supremos.
It’s Narziss to John Martyn’s Goldmund, the monastic rather than the raging route to “Solid Air”. It bears the influence of Tao Te Ching Lao Tzu and John Paul Sartre’s “Nausea”. It could have been a Nick Drake album had he lived. It harbours respect for Robert Wyatt, Joni Mitchell and Brian Eno and it bears no relation to any place, any time except the contemplations of David Sylvian’s soul. It’s title track asks: “Is this grip on life still my own/When every step I take leads me so far away/And every thought should bring me closer home?”
“I’m out of touch with everything that’s going on. I just pick things up from listening to all different areas of music from all different times so my influences can’t be pinpointed as easily as perhaps you used to be able to.”
“Brilliant Trees” was recorded in Berlin and London.
“I wanted it to be based in Europe because I wanted everybody to be in a strange place, including myself, so that we were all foreigners working in a studio with a feeling of adventure in a way you know, everybody coming to a spot to do something. It’s the first time I’ve felt like that recording an album.
“With Japan I normally had a loose structure to work with but this was very loose. Musically, there was no major concept, all I had in mind was that the musicians would come in and really perform as they felt. I wanted to create a relaxed environment for them to work in so they felt totally at ease to do whatever they liked on the tracks. The whole concept of the album was really to get performances from the people I was using, whereas, with Japan, it was never a performance, it was normally an arrangement, a composition.
“On this album the compositions are very simple and the idea was to let people work with a very loose framework and improvise over it.”

It must have been fascinating, not to say nerve-wracking, to discover how others interpreted his basic ideas?
“Yeah. I was familiar with the work of most of the musicians who played in the album so, in a way, I knew what to expect and none of them let me down. Nobody disappointed me at all, everybody was as true to form as I thought they would be.
“The idea of improvisation was very important because I no longer felt I had to prove myself as a songwriter. I actually didn’t feel like sitting down at home and writing songs anymore. I felt like I’d done that before with Japan and there was no point in keeping on doing it so I went into the studio with virtually nothing, totally unrehearsed. That was the excitement of it all, to get more emotion out of a piece of music than I ever did before.
“With Japan I’d take a very long time about recording vocals and I’d iron out all the little idiosyncrasies in the voice that I didn’t like but this time I didn’t. Maybe that’s a sign of courage, maybe it shows a self-confidence I didn’t have before?” I’ll offer no retrospective on the latter-day Japan’s place in the scheme of things. They existed, that’s all, and any contemporary appeal was purely coincidental. They offered no reasons for “Tin Drum”, just a few influences. They offered no excuses for the live requiem “Oil On Canvas”. It just came out. Their self-obsession alone was cause for fascination, especially Sylvian’s approach to language, which was always carefully, almost obsessively, oblique.
But where, say, “Tin Drum” was content to shelter behind a concept, luxuriating in visions of China, “Brilliant Trees” seems much more graphic, much less prone to employing imagery intent on obscuring as much as revealing its meanings. Sylvian traces the improvement to “Forbidden Colours”, the soundtrack he wrote for “Merry Christmas, Mr. Lawrence” with YMO’s Ryuichi Sakamoto.
“With ‘Forbidden Colours’ I achieved something I’d never achieved before in writing a lyric about myself which had no answer. It had a question about religion. I’ve got this thing with religions in general. I’m interested in people’s philosophies and why they cling to them. Do they need something to rely upon because they’re not strong enough in their own life or are they clinging to them because there’s a real value in it that I miss?
“At that time, I was becoming more obsessed about Christian religion and ‘Forbidden Colours’ was the first time I’d achieved that kind of writing, putting something into lyrics that was just an expression of what I was going through, that had no ending. It still hasn’t got an end to it and the music wasn’t coloured in any way. It was very honest and that’s what made me decide to carry on writing. I couldn’t go back. I was just incapable of getting out so I just wrote directly about myself.”
Sylvian’s writing with Japan was reflective rather than happening, if not the romantic poetic ideal of emotion recollected in tranquillity, then at least emotion tempered by thought. His songs were more like frigid sittings than teeming situations. His neurosis was unique. He was passive and tranquil where pop revelled in wild exaggeration.
“Yes I tended to write on reflection, after going through something rather than writing about a certain thing when I was going through it because I used to think you couldn’t get the best viewpoint like that. I would always try to make it maybe a little less personal-sounding so that people could relate to it more…”
He checks himself and discovers some doubt: “…or… maybe I would disguise it, I’m not sure. Maybe I was too afraid to show it that openly or maybe I was not capable of showing it that openly. On this album, I think I’ve been more direct. Even though I didn’t perform that much on it, I feel I’ve created something musically and lyrically in a far more personal style than I ever did before. I’ve written about some things when I’m in the middle of experiencing something – not having a solution or even a clear observation of it.
“This album has more of a confused feel about it you know there’s always a period in your life when you’re totally sure about yourself and suddenly something happens and it breaks down your whole picture of yourself? Well that’s what happened to me after Japan split up and now I’m writing as a confused person whose constantly doing things and acting in certain ways that surprise him, rather than as a person trying to keep control of himself. I think the writing’s more valuable for that.