David Sylvian: Portrait of an artist by Ian Birch

It all began back in 1982 when David Sylvian was on a visit to Japan to see his brother Steve play with Yukihiro Takahashi. Backstage after the concert he couldn’t help noticing how everyone seemed to have a Polaroid camera and would take pictures of everyone else taking pictures. He was
fascinated. Japan the group had decided to break up at the end of the year and David was anxious to find a new outlet for his energies. The Polaroid suddenly seemed a perfect solution. It was easy to operate, exciting and produced immediate results. It was also a logical step on from the drawing and painting he had been dabbling in over the previous months. 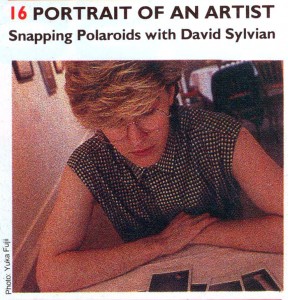 “I was always very lazy as far as taking pictures was concerned,” he smiles, “and after having filled a roll of film with pictures of friends and places, I invariably failed to have the film developed. So the Polaroid camera appeared to be well suited to me”. He became hooked.
During Japan’s farewell tour, he whiled away those long hours of boredom in hotel rooms experimenting with the camera. “I would take self-portraits and then distort the pictures by various means to find a variety of different effects. After tiring of using myself, the room, the TV etc. as subject matter, I would turn to the view from the hotel window.” But he quickly discovered that Polaroid aren’t that well suited to
landscapes. Not only are the pictures themselves small but you also cannot zero in on one focal point. He hit on the idea of Polaroid montages -a collection of separate polaroids that gradually build up a complete view. What interested him now was not just what you see but also how you take it. He started photographing a stately old church that faced his top-floor London flat. He did it from different angles, at different times of day and in different lights. He ended up with six montages that can be seen in his book, Perspectives: Polaroids ’82-84 (published by his own company Opium (Arts) Ltd).
After buildings he naturally enough moved on to people, working with close associates like Steve Jansen, Riuichi Sakamoto (with whom he wrote the “Forbidden Colours” single) and his girlfriend Yuka Fujii. His montage of Steve and David’s cat Oppi is an ideal example of the whole procedure. “It took about two hours and was done in my home,” explains David. “I moved the camera up and down his body, starting at the top
and then moving down from the right to the left and so forth. The idea of the picture is to make it very flat so you get everything in natural perspective. It looks like a miniature version of the real thing!

“That’s something the eye doesn’t do,” he continues. “By nature you see something that’s smaller -like the feet are smaller than the head. In a magazine you look at a picture as a whole and see it very quickly. “But with this montage you don’t look at it as one whole picture, instead you tend to move around it and look at each section like a separate picture. I like that idea. I like the idea of taking a portrait of somebody’s hands and arms and chest and then putting the whole thing together, giving you a valuable document of the person.”
And that’s not all. David also wants his pictures to give an idea of What the photographer is like. He wants his own “physical presence” to be there.
Consequently a good montage should tell us what the person in the picture is like, what the atmosphere of the session was like and what the feelings of the photographer were. If all this is achieved, the montage should be completely “individual and unrepeatable”.
“People are very wary about buying a photograph,” reckons David, “because they don’t feel it’s a one-off or anything special and they can’t feel the
photographer’s presence. But in mine you can. You can feel I was there and that slightly narrows the border between painting and photography because you can feel the presence of the photographer.” “But we’ve forgotten one crucial extra. What about Oppi? “Actually she was on top of my piano at the time so I thought it would be fun to include her,” he laughs. “Most of all it shows how casual Steve was.”

A selection of David’s work was shown earlier this year in June at London’s Hamilton Gallery (13 Carlos Place, W.1). Wherever possible the gallery owner asks the artist exhibiting there for something for his private collection. David agreed to do him a montage and decided to do part of the gallery itself. You can see the result blow. “The aim was to create the impossible! -what the eye can’t see in one go and what the camera can’t do in one go. I took the brightest section of the room because I don’t like to use flash and I just tried to make it the broadest picture possible. Once again the perspective is all-important. That’s what the whole thing is about.

Unfortunately I only had three boxes of Polaroids at the time so I didn’t get as much as I wanted. But I think it works!’ 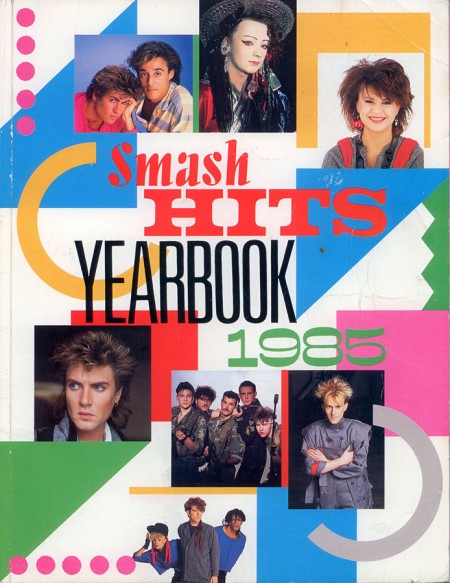