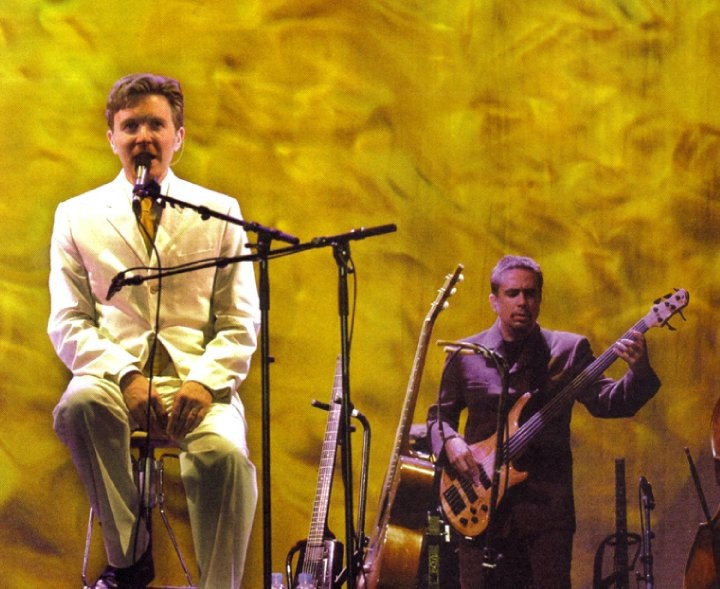 The man who was once ‘the most beautiful in the world’, David Sylvian, is finally happy, maybe not completely, but he’s found a happiness that sparkles and shines through the atmosphere and rhythmic muscle of his music for the end of the millennium.

And the very fact that David Sylvian is back more haunting and poetic than ever is a small matter of grace and something to be thankful for; his has not be an easy path. Sylvian’s one of those people who was always in the maybe-he’ll-be-with-us-and-maybe-he-won’t basket; there was always an uncertainty as to whether he’d go the distance as a musician. And when it comes to albums of the year time, before the decade and century tick over, Sylvian’s extraordinary and fulfilling Dead Bees On A Cake will be up there with the very best of them.

Now based in California after moving to America in 1992, getting married and spending some time in Minneapolis, where his wife, the poet and singer Ingrid Chavez, lived, Sylvian is a deeply emotional, spiritual man.

A devotee of his beloved Amma, Mata Amritanandamayi, Sylvian’s beliefs permeate Dead Bees On A Cake yet don’t immerse it in sectarian belief so it ends up being little more than another “I’ve seen the light” New Age journey.

There’s also little doubt that Sylvian has developed way beyond the frivolities that marked the demise of his now legendary late ’70s/early ’80s exercise in glam-metal funk and style, Japan, when he was labelled by the tabloids “the most beautiful man in the world”. It was one of the final straws for a man already deeply uneasy with the kind of stardom that had come courting in the wake of Japan’s stunning third album, Quiet Life, and its two chartbusting follow-ups, Gentlemen Take Polaroids and Tin Drum.

Yet it isn’t Japan and songs such as Quiet Life, The Other Side of Life, Swing, Nightporter (a homage to French composer, Eric Satie), The Art Of Parties, Visions of China and the UK top 5 hit, Ghosts, that mark Sylvian in most people’s memories. That honour belongs to the single Forbidden Colours, a vocal version of theme from Ryuichi Sakamoto’s award-winning score for the film Merry Christmas Mr Lawrence (starring David Bowie) that the composer asked Sylvian to write and perform.

Forbidden Colours also marks the first collaboration between the two men whose friendship now spans 20 years and countless works including many of their solo albums. For Sylvian, Sakamoto is one of an impressive cast list of collaborators that have defined his output since his first solo album, Brilliant Trees that planted Japan’s sound as the earth from which Sylvian would grow something quite poetic and unique.

And that was it: “After Secrets, music took a bit of a back seat in my life,” Sylvian says. “I was deeply troubled. There was a whole private search going on.” So instead of solo projects he concentrated on collaborations; two albums with Czukay (check out Plight And Premonition for some of the eeriest atmospheres on disc), reformed Japan but – much to the annoyance of the other members – insisted on a new name, Rain Tree Crow. They broke up after one album. The first half of the Nineties was dedicated to working with Fripp; The First Day, a noisy, electric funk rock set, gave him his highest chart placing since Japan while the live album Damage revealed Sylvian moving back to his trademark ballad style on several new songs.

Dead Bees On A Cake began after the culmination of the Damage world tour and took just over four years, something Sylvian found a little frustrating but ultimately rewarding: “A lot of the material for this album grew out of writing sessions for Ingrid. The big challenge for me as a songwriter is to draw something essential out of myself.”

He pauses then continues, “All my albums are incomplete in some respects. But this is the closest I’ve got to where I want to be.”

That is a place where his music seems to have coalesced: Dead Bees On A Cake represents all the David Sylvians that have been before, and one suspects, hints at those to come. On Midnight Sun, based on a John Lee Hooker drum loop, there’s raw blues-based beauty that’s far less ‘white man plays the blues’ than usual, Cafe Europa is a perfect end of the century pop song and one of two tracks featuring Chavez, the other – Krishna Blue – melds her spoken word performance with Sylvian’s adaption of Indian music to his own liquid atmospheres while the opening I Surrender – probably his favourite track – is a piece that incorporates all the best elements of Sylvian the solo composer and the pure essence of Japan. All Of My Mother’s Names is dark improvisation and moody speculation while the album enders – the utterly sublime Praise (sung by the Indian saint Shree Maa) and Darkest Dreaming (an almost meditative drift away) – finalise his message and are also the best way into the man.

“Praise is like a song of pure love, yearning for the divine and appreciation of the divine,” he says. “The last track throws in some doubt, a sense of isolation, a sense of being alone and wanting what Shree Maa has sung about, wanting that sense of unity, communion, merging with one consciousness if you like. This can sound so new agey but there’s no language to describe this stuff. I’m always fishing around for the right words.

“But it also allows the dark side in, the human side, which is … we feel terribly alone and there is a yearning for this partner in life which can be a physical partner or partnership with god if you like. It sort of over-rides every other emotion that we have, that this sense of solitude is unnatural to us but we have to go through that, live through it until we can find this place within ourselves where we are comfortable with who we are, what we are and what we are beyond all of that and that’s kind of what it imitates.

“I hope it sets up a sense of yearning that … you know when I listen to music sometimes, when the piece of music ends it leaves me in a state where I’m reflective and it helps me to see certain aspects. Like communing with nature, we don’t have so much nature around us anymore. We walk outside, we’re surrounded by traffic, at least most of us are, and we don’t get to be just quiet in nature which I think was obviously a very natural state for us to be in and one that would cause us to be more reflective.

“Something like music can serve that function so that when a piece of music finishes you can feel like you’ve just climbed down from a mountain and just had this liberating experience that incorporated both sadness, happiness and all the conflicting emotions that we’re capable of and actually being comfortable with them all.”

Sylvian talks easily these days, much more so than in the past, however, he has the safety net of knowing that he won’t do huge rounds of interviews – and he has his family, and that is all. He continually mentions them, talks of how he and Chavez share everything, ground one another and how their children do that for them, as well.

Dead Bees On A Cake is pure emotion; Sylvian’s recognition of his own joy. He says that because it’s born out of a period of his life there are unifying aspects running through it: “Songs of devotion, of love, and celebratory songs celebrating life. I guess that’s the overall feeling, it’s a mood of celebration, celebrating both the dark and light sides of life and feeling the sense of intoxication, like being intoxicated with the loved one or with life in general or with god divine, whatever. That sense of overwhelming joy that you can feel through love with an individual, through love with whatever, you know.

“I think most of my solo work is celebratory but it’s not always apparently so because I allow the shadow side to come in and because I don’t think you can embrace life fully without the darker side being present. It has to be present to paint a full picture. But I guess I feel that it’s up to us each individually to find that peace, to find that joy, to find that love within us. That’s been my path and that’s one of the reasons why the album took so long, because I pursued the path actively trying to learn ways and methods of developing that aspect of my own self.”

So what about the title? Where does that fit in? It seems so oddly perfect. “It’s an odd title, I guess I didn’t want to be too precious about it,” he says. “There was humour in it and it’s earthy. I guess I had the title for a long time and I wasn’t sure if it was going to remain a title for the album but, ultimately, it became so much a part of the album for me that I couldn’t remove it.

Ultimately though, this is about a journey of rediscovery. David Sylvian is happy he’s made a pop record again, happy to consider himself a pop artist, happy to have reached a significant place in his life. Perhaps, the place everybody seeks, in all the different destinations that entails. If he’s found peace, he’s lucky.

He laughs, throws back to those early days of Japan. “There was a whole visual aspect of the band, an artifice and in a way it was a slow process, from the beginning of Japan to the point where it broke up, for me to break through the artifice I’d created.

“I’d started creating music as something to hide behind, to hide from the world, create somebody else, create a persona and I realised that was a fruitless and unrewarding experience. So I tried to strip away slowly all these mannerisms and affectations to try and find the person within and to try and reveal myself through the work which I didn’t feel very comfortable doing when I was younger, but I progressively became more comfortable with it to the point where I felt that that was where some of the value lay in producing the work.”

He says very quietly: “Whatever opens your heart, find it, follow it.”