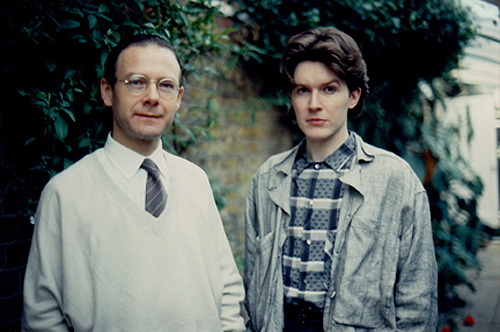 David Sylvian and Robert Fripp have combined forces to produce a new album, The First Time , but collaboration for the former Japan frontman and “aggressive perfectionist” hasn’t always run smoothly.
Robert Fripp blows into the ear of his friend David Sylvian. The ex-Japan star remains implacable as he stares into the lens of the camera. Fripp’s clowning continues. He yanks out a false front tooth, pulls ridiculous faces, then reads aloud from a wad of business letters in a soft, measured Dorset accent. Sylvian’ s patience finally snaps and he leaves the hotel room without a word, his wife, the former Prince protege, Ingrid Chavez, hurrying after him.
Half-an-hour later, the singer is talked round and the shoot is completed without fuss in the garden of London’s Pembridge Gardens Hotel. Fripp remains silent throughout and takes the matter no further. Sylvian, however, has to have the final say. In a moment of defiance, he destroys the first four rolls of our photographer’s film, leaving his record label, Virgin Records, with a 10,000 bill for damaged property. Despite their shared interest in the avant garde, the pair al.e opposites as personalities and musicians. Keen-eyed through his small round glasses, Fripp tries to please and inform as he describes the mystical power of “the Good Fairy”, without a trace of irony or cynicism. In stark contrast to these mind jumps and bizarre antics, the inscrutable, rather humdrum-looking man sitting close by is amiable but calculated in his speech.

David Sylvian is usually described as a rather delicate, effete and introverted man. However, behind the glam, pansticked Ferry clone of Japan, and the mousy-haired New Ager of his solo career, is a stubborn character used to getting his own way. “I’m an obsessive character, a passionate person,” he declares over a glass of mineral water. “Driven, I suppose. If I really believe in something, then I’ll just go ahead with it.”

His album with the King Crimson guru, The First Time is billed as a collaboration. The pair worked together as far back as 1985 on Sylvian’s Gone To Earth album, but they only began to improvise and write as a duo at the end of ’91. However it’s clear who is in charge. According to Toyah Wilcox’s husband, Fripp, “on this particular album, I’m being chaotic and David is more organized. He has a very focused approach”.
Final mixing was left to Sylvian. “He’s a good man. I trust his sense of things,” explains Fripp, who prefers to work as a “small, mobile, intelligent unit” operating on other artist’s material.

At 47, this Crippen-like figure remains a genuine maverick. He has recorded with many of the pioneering pop stars of the last 20 years, notably David Bowie and Brian Eno on Heroes. During these sessions he enjoyed a looser arrangement than the one established with Sylvian. “Bowie would present himself in terms of a persona, but he didn’t impose that mask on the musicians he was working with,” he says, hands clasped together in an erect, priest-like pose. “Both Eno and Bowie had the sense to put me in a place and simply say, ‘go’. I prefer working with characters like that.”

Sylvian’s former school friends and sibling in the band Japan are also familiar with the artist’s ‘hands on’ style. Two years ago, their Rain Tree Crow project ended in animosity as Steve Jansen (both he and David ditched their Lewisham family name–Batt) accused his brother of hijacking the album: “At the end of the day, Dave has tried to take it away from us,” he claimed. “We weren’t allowed to go to the mixing because he put up the money and that, for us, doesn’t show respect. I know he believes he’s right in what he’s doing. He believes in himself to such a degree that he abuses his friends. That’s the bottom line.”
The quietly spoken singer now retorts, “I was angry at the way I was treated.” He also feels misunderstood, choosing his words logically and with care as he states, “I have a habit of leaving situations and people behind if it’s necessary. It may be perceived by the people I left behind as a heartless thing to do, but really it’s a growing away from. You must accept the fact that a relationship is at an end. I love my brother and I know we’ll find each other again.”
Sylvian is an aggressive perfectionist in music, relationships and business. His deal with Virgin allows him complete artistic freedom, despite poor sales for nearly a decade. In contrast, Japan’s keyboard player, Richard Barbieri recounts the problems he and Jansen have experienced over their own albums. “Virgin didn’t want a follow-up to our Stories Across Borders in ’91. They were worried that it might clash with David’s project with Robert Fripp. There has always been something political there. It’s been a struggle for the rest of us, but David expects complete freedom. It’s the only way he knows.”
Nevertheless, Sylvian is not an arrogant, tyrannical front man. He is self-critical and thankfully lacking the usual ‘pop star’ bravado. He concedes that “the whole fame thing, the exhibitionist performer and so on, was something I needed to do”, but dismisses the glam strut of Japan’ s first two albums, Adolescent Sex and Obscure Alternatives, as “functionless.” He adds, “I was too screwed up to understand who I was. Nothing was being displayed about me other than what a neurotic mess I was.” The reluctant performer is also decidedly lukewarm about later, more stylized Japan albums, pointing to the track ‘Ghosts’ as the moment when “I began to find myself through my work”.

Determined to enjoy a lower profile, he turned to music and cocaine for inspiration. He launched his solo career in 1984 with the blissed-out, reverential atmospheres of Brilliant Trees. The cocaine was to escape, more than anything else, and it was the last time that I experimented with drugs,” he recalls. “It was intense for about a year and-a-half. I recorded Brilliant Trees on it, and part of Gone To Earth.”
His personality has continued to change as “the sense of well-being” he expressed through these early solo outings began to fade. He tried to deal with these conflicts through analysis. “I was in therapy on and off for two years. Through my analyst and talking with my parents, I’ve got an idea of what was missing in my childhood and it’s helped a lot.”
In 1991, he revealed to VOX some of the problems he experienced during his upbringing: “My father had a fantastic struggle dealing with the fact that he had to work really hard to bring up kids. He was really unhappy with his life and this would show in his aggression, sometimes towards his family. It was the only way he could let out his frustration.”
Meanwhile, the obsessive 35-year-old stumbled into a deep personal crisis of his own. Following his return to acoustic songwriting on 1987’s Secrets Of The Beehive album, he found himself struggling to write “anything of value”. He scrapped the idea of doing another solo record and concentrated on collaboration instead, culminating in the lyrics and heavy rock angst of The First Time. As the title hints. it’s an initial stab at expressing this low period of depression and spiritual upheaval. He continues, “I avoided talking to people and if I was confronted, yeah, I became aggressive. I began to hurt other people and that reflected badly on myself which made things worse.” This may sound like a man wallowing in self-pity, but Sylvian insists, “I avoided wallowing because it was too painful. Sometimes I can laugh at the intensity of it all and how pathetic it is. But I couldn’t laugh myself out of the situation.”
Fripp was aware of his friend’s personal problems during recording sessions for the album. “I tried to support him in whatever he was doing and encourage him to go further. If that meant he had to leave the studio for a week, then I trusted him” he affirms with a quiet nod, before stepping lightly out of the room.
Ingrid Chavez takes Fripp’s place next to her partner. They talk about their relationship as “mind- blowing”, a real change from the traumas that proceeded them. Sylvian recalls, “We were both in a mixed-up state when we met each other. Our private lives were pretty erratic. Mine was falling apart.”
He contacted Ingrid after she’d sent him a copy of her first album and quickly concluded that she was the “perfect voice” for the ‘Tanai Kaiki II’ single he released with Ryuichi Sakamoto last year. “We’d never met, but we spoke to each other on the phone a lot,” he grins. “We were getting on really well, so I asked her to come to New Orleans, because I’d never been there. We started traveling together, finally did the record and fell in love in the process.”

“Yes, I’m a married woman,” laughs Ingrid. “David flew into Minneapolis for one day from London. We got married in my apartment with just my two cats as witnesses. And then he had to fly back the next morning.”
Speaking with the fanatical zeal of a religious convert, she explains, “I didn’t realize that my life was in such a state of chaos until David came along and kept showing me things. I was one of those people going through life thinking everything was alright. But now I could never go back that way.” She sums up her life with her husband as “more peaceful, it’s more enjoyable..”
“……. and profound”, adds David, determined, as ever, to have the final word.