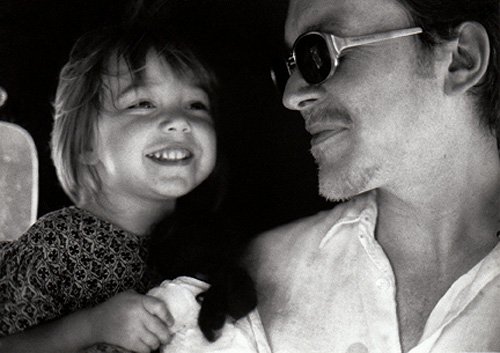 David Sylvian is talking about advertising, about how he, his wife and three children skirt consumer-aimed pressure and stay true to their spartan, spiritual lifestyle.

David Sylvian is talking about advertising, about how he, his wife  and three children skirt consumer-aimed pressure and stay true to their  spartan, spiritual lifestyle. Even the most beautiful television  commercial-an art form in itself, usually-leaves the UK-bred,  Sonoma-based singer cold. The visuals speed by, he sighs, “but I don’t  feel attracted or attached to any of that stuff that comes my way.” But  with a 14-year-old son in the house, how does the family resist, say, a  high-pressure pitch for Sony’s teen necessity, Playstation? This hits a  nerve with Sylvian. He scratches his D’Artagnon goatee, pondering the  predicament. “When he was younger, he was really into Playstation,” he  recalls. “But we found that he would just come out with certain words  that shouldn’t be in his vocabulary yet. I can’t remember what this one  awful word was…”

Sylvian claps his hands together, delighted. “Yes! ‘Fatality from  Mortal Kombat! And we thought, ‘Wow, this is really strange coming out  of the mouth of a seven-year-old; it doesn’t feel right.'”&nbsp; So Dad and Mom (former Paisley Park poet Ingrid Chavez, whom  Sylvian met while living in Minneapolis) sat Junior down for a little  metaphysical chat. Wouldn’t it be better, the folks reasoned, if the  distracting system were shelved for a little while? “He was very good at drawing, but the whole time he had these games, he didn’t draw one real picture,” Sylvian continues. “So we asked him, ‘What’s this about? You  were really creative, you had this whole thing going and now all you do  is draw people being dismembered. There’s something going on here, you can see that, right?'” Sylvian is suddenly aglow with fatherly pride.
“And he saw it! And he gave it up! And as a result, he has a far more  creative life-he just got accepted into one of the local art schools!” This illustrates one of Sylvian’s underlying credos, a tenet that’s guided him since the disbanding of his art-rock outfit Japan nearly two decades ago: “Stay open and true to the moment-the more conscious we  are of the moment, the less likely we are to make the same mistakes.”  Hence, his first solo album in 12 years, Dead Bees on a Cake (Virgin),  concentrates on exactly how the man is feeling now, at 40, in a moment  he terms “probably the happiest, the richest, the most eventful period  of my life.” Over the years, he’s collaborated with such stellar sidemen as Robert Fripp, Mark Isham, Bill Nelson, Can’s Holger Czukay, and  long-time chum Ryuichi Sakamoto (who guests on several Bees numbers).
Lately, however, Sylvian has been consumed by a quest for inner peace,  which led him to an Indian ascetic he calls his “teacher,” and onward to meditation, painting and a dramatic change in his home recording  approach: “You have to remove everything that’s extraneous to create a
clarity.” In doing so, he adds, he’s “made an album that somehow condenses a lot of the interests and experiences from my past into
accessible pop songs.” After convincing a kid to waive the addicting Mortal Kombat, it’s a flick of the wrist for Sylvian to communicate this newfound serenity to listeners. Bees is aching, gorgeous testimony, swathed in velvety keyboard textures, shambling rhythms and deceptively simple arrangements that underscore his reedy, Bryan Ferry-ish croon. Whereas he once relied on blatant film/literary metaphors (Gunter Grass’s The Tin Drum, for instance), the composer-who refers to his songs as “pieces” and “works”-opted to break with cultural tradition this time around. “I didn’t want to mislead,” he explains. “I wanted to make my statements more my own.” Using the innate beauty of the natural world
around him, he states his case in “I Surrender”: “I opened up the pathway of the heart/The flowers died embittered from the start …
Birds fly and fill the summer skies and I surrender.”
“Wanderlust,” “Pollen Path,” “The Shining of Peace”-there’s such an exotic fragrance of peace wafting from the disc, it could qualify as aromatherapy. Personally, Sylvian has a similar aura. On a recent SF  shopping trip (looking like an older, wiser version of that
platinum-haired quasi-punk that glared from Japan’s bratty Adolescent Sex debut in ’78), he sat with almost regal bearing in his hotel suite, a scarf wrapped around his neck as the winter wind whipped in through an open window, a Mona Lisa-subtle smile on his lips as he spoke of all the arcane knowledge he’s carefully, purposefully acquired. Knowledge, he stresses, which is available to anyone willing to seek it. “People have said to me, ‘Well, isn’t surrender the easiest path to take?'” he chortles. “But I’ve never felt that to be the case. Surrendering your will to some other being is probably the most difficult step to take, and it’s not one action and it’s over, like, ‘Oh, I’ve surrendered.’ You have to surrender every moment, with every breath.”
Learning such life lessons-coupled with his family’s annual four-wheeler pilgrimage, following their guru in her summer ministering-to-the-masses treks across America-convinced Sylvian of a couple of things. “I felt I had a lot to say, and I’m at my most eloquent when I’m working within this context.” But aren’t there stressful, world-gets-him-down times when the concept of karate-chopping the hell out some Mortal Kombat character sounds pretty damn good?Sylvian’s eyes flash for merely a microsecond. Nope. Now he’s Zenlike-calm again. His Confucian reply: “It’s all a matter of figuring out how your time is being spent, how it’s affecting you mentally, affecting your focus. That’s how we handle things in our family-we figure out the alternatives, figure out what else is out there…
Share this
0 Be the first to like this
Related Articles