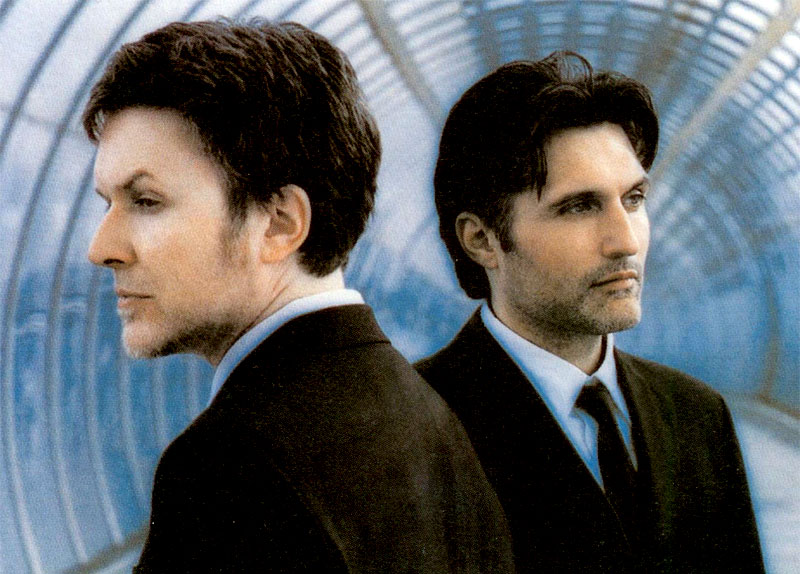 David Sylvians musical journey is one of soul searching and constant change. The British singer/songwriters career began in 1974 with the group Japan. Comprised of Sylvian, drummer Steve Jansen, keyboardist Richard Barbieri, and bassist Mick Karn, the bands sound was initially inspired by glam-rock icons such as David Bowie and the New York Dolls. The group eventually achieved iconic status itself with its fifth and final studio album, 1981s Tin Drum, which completed Japans transformation into an adventurous, synth-based pop act full of world-music influences and vivid textures.

Sylvians most recent studio album, Blemish [Samadhi Sound], is without question his most challenging. The improvisation-based disc was recorded at his home studio in New Hampshire, and was released on his own independent label. Half of the record features entirely solo performances, with Sylvian taking on all of the vocals, guitar playing, and electronic treatments. Experimental guitarists Derek Bailey and Christian Fennesz contribute to the discs other tracks. The albums songs are as evocative and fragile as any of Sylvians prior work, but housed in fractured structures that include disquieting buzzes, hums, and clicks designed to provoke listeners to go beyond the act of complacent listening. Blemish also features Sylvians most stark, intense, and emotionally distressed pieces to date. Also recently released, The Good Son vs. the Only Daughter [Samadhi Sound], turns Blemishs material on its head via a series of remixes by avant-garde musicians and producers, including Ryoji Ikeda, Burnt Friedman, and Yoshihiro Hanno.

Describe your creative process.
For me, the starting point is having a very tangible sense that ideas are beginning to form, or that theres a wealth of emotion that needs to find a voice. I think of it as a gestation period in which I carry the sensation around for a certain period of time, letting it grow and clarify itself. During that period, I go into sponge mode and selectively absorb ideas from things such as music, novels, poetry, or travel. I might also work with sounds, but not actually begin writing.

The gestation period may take weeks or months, but once I get to a place where I sense some form or structure, Ill sit down with a guitar, keyboard, or laptop, and the material will begin to take shape very, very quickly. For instance, I had the notion of Blemish kicking around for about a year prior to actually sitting down and writing the material, but the whole album from writing to completion of mixes was done in a period of six weeks.

What are your biggest challenges when creating music?
My limited abilities as a musician are the greatest frustration, but they are also the source of creative solutions. Im usually trying to write on a guitar or keyboard, but I only have a limited capacity as a player, and sometimes I want to go further than my technical abilities allow. That sometimes leads to interesting solutions, and it can mean moving away from traditional instruments and using synthesizers, samplers, and laptops.

On Blemish, for example, I tried to find fresh ways of approaching the guitar without necessarily strumming. Sometimes I would strike the strings in different ways, and then treat the sound after the fact. At other times Id experiment with radical tunings or employ feedback. Basically, I would just sit down with the guitar and amp, and try to get sounds out of the instrument. This approach not only facilitated the whole improvisational aspect of the compositional process, it also allowed me to work quickly.

It seems as if you flip-flop between just letting things flow and a very studied approach to overcoming obstacles.
Well, I do have to actively work around my limitations, but, in actuality, the very notion of craftsmanship is something that tends to alienate me. You see, Im not a craftsman in the way some songwriters are, because I dont aim to find formulas that work for me. I always try to write from a very impulsive and intuitive standpoint.

What is your overall philosophy as a guitarist?
Im self-taught, so Ive always invented my own chords. Ive had wonderful experiences confusing guitarists by showing them the shapes I play, and then getting them to work out what the hell they are. My approach has to do with what Im familiar with. Theres a wealth of guitars and pedals out there, and the trick is to learn one or two of them really well, and try to get them to speak for me. I use an old Ampeg amp, a few pedals, and a handful of guitarsincluding a Steinberger and a Kleinand I try to get what I need out of them. Familiarity is an important part of facility, and the last thing you want to do when youre getting to grips with writing or recording a piece of music is to sit there and open a manual. Nothing will kill the creative spirit faster than that.

Im also not really a fantastic soloist, and I still struggle to find the right chords on a guitar. I kind of relearn the instrument every time I pick it up. There are a lot of musicians like me out therepeople who tend to be composers more than they are musicians.

What qualities do you look for in the guitarists you collaborate with?
Im interested in players that take the instrument that extra mile to develop a vocabulary thats entirely their own. I tend to listen to a lot of guitarists, and theyre often in my frame of reference. Whom I collaborate with depends on the nature of the composition, and, typically, the work cries out for a particular voice. For example, Midnight Sun on Dead Bees on a Cake obviously needed Marc Ribot. Having said that, Ive worked with guitarists in other ways, too. For example, on Blemish, I asked Derek Bailey to present me with a musical challenge that I could respond to as a vocalist, rather than making a contribution to an existing composition. There was a similar arrangement when I worked with Bill Frisell on the Dobro pieces we did together for Dead Bees on a Cake.

Blemish was a radical departure from the more traditional songwriting style of your previous efforts. What motivated you to go that route?
What I was feeling as a listenerand also as a writerwas that the old forms just werent working anymore. I thought they were too comfortable and overly familiar, and they didnt necessarily touch us as deeply emotionally as they once could. We have to redefine the language of musical composition, and that was what I was trying get to grips with on Blemish. So while making the record, I sidestepped the issue of structure to some degree to explore and have greater freedom lyrically.

There was a sense of immediacy in that the lyrics were written on the spot. I recorded them before they had really taken formwhich meant there wasnt time to ask if a line was good or appropriate. Whatever surfaced is what I went with in order to allow the full potency of the idea to come through. From that point onwards, it was a process of piecing the songs together by editing from a series of performances. But I didnt allow myself to rework anything. Everything had to stand on its own at the end of the session, so the discipline was to avoid refiningto leave everything in a rather raw state.

What appealed to you about having other musicians remix the Blemish material for The Good Son vs. the Only Daughter?
To be honest, Ive been very reluctant to delve too deeply into the remix culture just because, for the most part, the people remixing would rather be creating their own work. Often, theyre really just doing it on the basis of a commission. Its a paid job, and, therefore, youre only getting so much commitment. Very rarely do these remixes improve or elaborate on the originals, or further the emotional content. Having said that, I felt the Blemish material offered a unique opportunity for certain individuals to really rework the compositions in a rather elaborate manner, because, with the exception of the Derek Bailey-related compositions, the material was recorded over drones or two chords. On top of that, there was the notion of working with artists I have come into contact with over the past year or so, and I used the remixes as a way of testing the waters for possible future collaborations.

How would you characterize your core motivations as a musician today?
My interests lie in the idea of songs for the 21st Centuryto speak to now in a way that is somewhat provocative, and not exactly easy listening. The reward for being confronted with this kind of material is a sense of being alive within the creation of the work. Its similar to when you walk into an art gallery, and theres a new and powerful piece of art on which the paint is hardly dry. The piece is speaking to now, and you can somehow connect with that work on an equal footing. Its very much alive and of its time. Its an enormous and valuable challenge to attempt to create work that embodies its time, and speaks to it with a new vocabulary.

Weve become numb and complacent in the way we approach music. You could just explore the past, but does it really speak to you in the same way as something created in your time with the intention of getting across very complex emotions? Its time for renewal. We need to cleanse the system and reinvent it so we can really feel again. We need to find and create work that is provocative. Work that can steal up on us when were relatively unaware, and really blow our hearts and minds wide open.