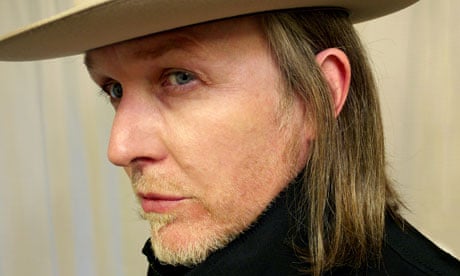 David Sylvian: ‘Do gentlemen still take Polaroids? I think they take Viagra now!’
The former Japan frontman on cancelling his tour, the influence of the stars and finding his way as a solo artist
by Richard Vine, first published on Thursday 8 Mar 2012

David Sylvian: a new retrospective collection, A Victim of Stars, spans his solo career from 1982 to 2012.

Hi David, you’ve just cancelled your tour (1 – see footnotes below) – that must be very disappointing.
It’s inconvenient on so many levels. There’s a lot of discomfort involved; I’m going through a series of epidurals just to get myself back on my feet again.

What was it like for you to go back to early solo material such as Ghosts and Bamboo Houses for your latest retrospective release, A Victim of Stars (2)?
To be honest, I had very little to do with the compilation. I left it in EMI’s hands, and it developed into a full-blown retrospective which I was extremely happy about because it gives a much fuller picture of what I’ve been doing throughout the past 30-odd years. Ghosts is like a touchstone in that respect. You can see some kind of the development of that original idea of the deconstruction of the popular song, and you can hear that echoed throughout my work in different periods

Do you have a favourite pop song?
No I don’t, not really, there are so many. I don’t listen to a lot of music any more and even the people I’ve loved for years – the Nick Drakes of this world – I can’t go back to them and listen to them over and over. Creating a decent pop song is a challenge – and occasionally, once in every decade – it’s kind of fun to do that. That’s the kind of writing I’ve been doing with Joan Wasser (3).

You’ve always mixed experimental tracks with more song-based material. Do you think audiences respond to experimentation when it works?
No idea! You hear the lament that you go to see your favourite artist and you expect to hear the songs from the Best Of collection – but I don’t. If I went to a Dylan concert, I’d rather hear his new material, what his heart is involved in now, rather than what he wrote when he was 25 years old. That doesn’t make any sense to me. The public so often want to freeze the artist in a moment in time when they were at their peak, and they want the artist to revisit it over and over again as if it was something authentic.

Is A Victim of Stars a reference to cosmology, or your pop star days, when you were “the most beautiful man in the world” (4)?
It was a song I wrote with Hector Zazou in the early 90s (5). I actually handed out a number of different titles and that was the one that was selected. For me, it works on a number of different levels. I’m not a fatalist by any means, but I think there is a certain aspect of predestination to some degree … there are life lessons laid out before you, almost like hurdles that have to be overcome to allow you to move forward. In that sense we all are a victim of stars.

Was it difficult to get in touch with people such as Ryuichi Sakamoto (6) in the 80s when you couldn’t just email or tweet them?
Back in the day it was a little bit odd, because you had to work through labels and management. I met Ryuichi in Japan when he was invited to interview us for a publication, and we got on really well. The interview itself was probably pretty damn awful – neither party speaking that much – but afterwards, once the microphones were switched off, we just got on very well.

If gentlemen used to take Polaroids (7), do they take Hipstamatic pics on their iPhones now?
No, I think they take Viagra now!

What would you tell the 1982 version of David Sylvian, and what do you think the 82 version would think of you now?
Oh gosh … I’m not really sure! If I could be that nurturing voice to the younger man, it would be beautiful to have found his voice earlier, in every sense of the word, and to not be afraid of moving away from the limelight sooner than I did. It wasn’t something I enjoyed. I think if the young man was looking at the older man that I am, I would hope that he’d be saying: “That’s where I want to be in 30 years’ time.” I was working with people like Holger Czukay (8) and looking at them and thinking, you’re just following an idiosyncratic path that is so beautiful because it is just made purely of your choice, and born of your own needs, and your own aesthetic.

Do you have any good jokes?
Gosh, do I have any jokes? My lord … I should have, I’m always joking with the kids (9). Let me think for a second, I have a terrible time retaining them … I like the old Tommy Cooper joke, the one that goes: Guy walks into a pet shop and says, “I’d like to buy a wasp.” And the shop owner says, “I’m sorry sir, but we don’t carry wasps.” “Well that’s funny, there’s one in the window.”

Foot notes (1) Sylvian postponed his Implausible Beauty tour due to a “lower back injury”. (2) A Victim of Stars, 1982-2012 is out on Virgin. (3) AKA Joan As Policewoman; Sylvian is recording an album with her. (4) © Smash Hits/every tabloid headline writer in the, 1980s. (5) On Zazou’s Sahara Blue, released in 1992. (6) Sakamoto played in the Yellow Magic Orchestra, huge in Asia in the late 70s/early 80s. (7) Gentlemen Take Polaroids, 1980, Japan’s fourth studio album. (8) A founding member of Krautrock legends Can, Czukay played “French horn, voice, guitar, dictaphone” on Sylvian’s debut solo album Brilliant Trees. (9) Sylvian has two daughters with his ex-wife Ingrid Chavez, who played on Prince’s Lovesexy album, appeared in Graffiti Bridge as Prince’s love interest, and received an out-of-court settlement after not being credited for her work on the Madonna/Lenny Kravitz single Justify My Love