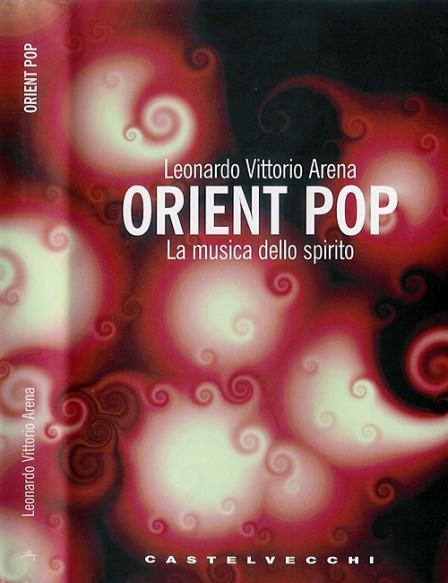 Orient Pop, La musica dello spirito (The Music of Spirit, Rom, Castelvecchi 2008) is an Italian book , where Leonardo Vittorio Arena deals with the Eastern and alchemical influences on his music and his thought.

The book features a chapter on David Sylvian on this subject. Leonardo describes the Eastern and alchemical influences on David’s music and David reflects his thoughts as well. All was based on an extensive interview between the author and David. This interview is also included in the book (in Italian).

LVA: When did you feel that your music journey was becoming spiritual? Has there been a special kind of enlightenment or awakening under way?
DS: To some extent Ive always known that my journey in music was a spiritual one but it didnt really hit me consciously until the early eighties when I began to analyse my childlike beliefs and just about every other aspect of my life. I then found the process of questioning that gave direction in life was mirrored in the work and vice versa. This helped give greater purpose, direction, and clarity to the activity of making music. It became indivisible, wholly integrated, into every other aspect of my life.

LVA: Are you more inspired by solitude? Im hinting at to the recent live sets and records of yours. Heavy suffering showed many spiritual teachers the way. Is also this true for you or do you believe that serenity is a more fertile field to creativity?
DS: I do enjoy solitude. It is a very necessary component of my daily life that supports mental wellbeing. I believe creativity can be found in all of lifes ups and downs. It is possible of course that the need to express oneself when going through difficult times is greater than when one is relatively happy. Also, I believe it is easier for music to do its job if it acknowledges the darker aspects of life and, in doing so, accentuates the more positive ones. These experiences can be uplifting in a way that is sustainable, that resonates long after the listening experience is over.

LVA: You seem to be influenced by many spiritual movements both in the East and in the West: Buddhism, Hinduism, Bhakti Yoga, Sufism, Shamanism, Orphism, Christianity, the Fourth Way, and so on. Do you feel more intimate with any of them?
DS: I feel closest to Hinduism, Bhakti yoga, and Buddhism. I guess it would be fair to say that Bhakti yoga is my path which is supported and augmented in large part by aspects of Hindu and Buddhist philosophy and practice.

LVA: It seems that the feminine side of you, which Carl Gustav Jung would call anima (soul), is very relevant in your music work even before Dead Bees On A Cake. May the androgynous be the most spiritual artist?
DS: We are both male and female therefore to strike this balance internally is to embrace that truth without denying or suppressing one in favour of another. If we look at contemporary culture we see that the gay and lesbian influence has been largely beneficial and often somewhat pivotal in forwarding the cultural exchange. The works are often progressive and highly influential. To be fearless of who and what we are is to be more effective, insightful, less bigoted and defensive. With this approach we have the opportunity to stand closer to truth.

LVA: The titles of two albums of yours are connected with bees. According many alchemists and the German poet-philosopher Novalis, bees represent spiritual transformation. Have you chosen these insects due to their symbolism?
DS: In my original use of the bee metaphor I did choose them for their traditional symbolism. Spiritual transformation, societal hierarchy and community. In later works the reference to bees retained this original symbolism but I augmented it with a little of my own.

LVA: Indian music is very present in songs such as The Song Which Gives The Key To Perfection and the whole album Dead Bees On A Cake. As I put it, Today Sylvian is the only rock singer who may perform Indian music convincingly. Did you have a formal training in Indian music?
DS: I did not. As with most things in my life what I have picked up I have absorbed via osmosis.

LVA: It seems to me that your approach to this music is very different from the Beatles or George Harrisons most popular one.
DS: Well, these are different times. The temptation when on a spiritual path with a Guru is to speak only of the blissful aspect of the romance. This is a very important part of the relationship between guru and devotee. But the spiritual path isnt an easy one. To quote Swami Paramatmananda

“Most people think
That the spiritual path
Is some peaceful
Sweet thing
That only gets
More and more peaceful
The Spiritual path is a
Bloody WAR!

My work has reflected the romance between guru and devotee but it has also touched upon the actual practice as well as the suffering involved.

LVA: Which is your spiritual relationship with instruments and voice? How much do you take into account technical approach?
DS: A teacher of mine told me that singing is my sadhana. By this I took her to mean it is my means to growth. Singing has always been problematic for me, a struggle. I think it is in this struggle that Im destined to learn and to evolve. I have little technique as a musician and singer. Mine has been an intuitive approach to both. Trial and error. It will always be that way for me, of that Im sure. Ive embraced the path of the passionate amateur rather than the capable professional. Somehow this works for me, keeps me excited.

LVA: In meditation workshops I often put your music, both instrumental and vocal in the background. Members get the best results. What do you think about this use of your music?
DS: Music has many functions in society. This might be one of the personally more rewarding.

LVA: Do you have a negative prospect of the future or do you believe in human beings? Is Europe able to produce a new spiritual Renaissance?
DS: I am essentially an optimist although the clouds of pessimism tend to return more frequently than they once did and stay longer.
I dont know if I believe in human beings. I think I have a stronger faith in the benevolence of the universe to help us back on our feet. For example, these lessons might take the form of massive tragedies from which we can only recover by embracing compassion and a renewed sense of humanity. Love is the substrata of everything. Ultimately we will return to this knowledge. The journey has been long and theres been much suffering. I cant see how this cannot continue to be the case until we wake up.

LVA: I wondered which directions your music work would take after Blemish? Which is the spiritual perspective of the new album?
DS: Half of the material on the new album was written prior to Blemish. That material looks at the world around us post 9/11. Theres a greater social commentary in the lyrical content than in past work although this is reflected through my own belief system. There are personal themes also but the emphasis, if there is one, is placed upon the stress point where the external world comes into contact with the interior. It is a collection of songs of conflict.

Thank you so much, Mr Sylvian, for your precious time and attention.